Sword of Honor: I might be obsessed with Musashi Miyamoto now...

Sword of Honor
By David Kirk
Published by Doubleday 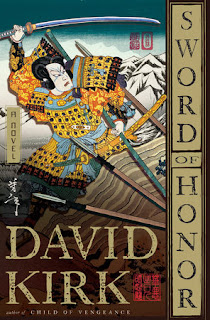 That Musashi Miyamoto was an interesting fellow, wasn't he? Reading even a basic account of his life gives a picture of a fascinating person, one who wandered Japan fighting dozens of duels, developing his own swordfighting style, formulating a philosophy, and ending up as a highly regarded author and artist. It's no surprise that he's a figure that has resonated across centuries and continents, inspiring retellings of his life in the form of prose biographies, films, and manga (to name just a few examples).

And here's another one to go on the pile, taking the approach of a historical novel with Miyamoto as the main character. This is actually the second in a series, with the first entry, Child of Vengeance, following Musashi's earlier days and climaxing with the battle of Sekigahara, in which, based on what we learn in this book, he would have fought on the losing side, but fled in order to avoid dying for a pointless cause. This book picks up almost immediately afterward, with Musashi having realized the unfairness of the system of samurai honor that would compel a man to die at the whim of his lord, whether that means being struck down in battle or ordered to commit seppuku for whatever reason a man's master deemed necessary.

At first, Musashi lives outside of society, subsisting as a hermit in the wilderness, but he is eventually forced to interact with society, and his rage at an injustice leads him to set out on a campaign of (fairly random) action against what he sees as a corrupt system. When he is targeted for assassination by the Yoshioka swordfighting school for some perceived slight against their honor that he can't even remember, he heads to their home base of Kyoto to confront them, leading to an escalating series of confrontations and duels that culminates in an incredible bloodbath of a battle.

Through all of this, we get a fascinating view of 17th-century Japan, not just from Musashi's perspective, but from other characters as well, including the Yoshioka swordsman sent to kill him, the de facto head of the Yoshioka school, and the captain of the Tokugawa clan who has been charged with keeping the peace in Kyoto and sees Musashi's battle against the Yoshioka as an opportunity to sway the populace toward supporting the new shogun. Musashi's battle against the impenetrable edifice of the feudal system makes sense to him, but getting other points of view provides a wider perspective of how people fit into this society, and why they might fight to uphold practices like seppuku that seem insane and brutal from a modern perspective.

What's more, while Musashi's cause may be righteous, he isn't let off the hook for his failings or given the unassailable position of a social savior. He gets a conscience of a sort in the form of a women he befriends, a blind immigrant from the Ryukyu islands who questions the meaning behind his actions and tries to dissuade him from proceeding down his ever-more-violent path. This relationship gives him a fascinating inner struggle along with his outer battles, leading to a classic dramatic conflict in which he almost gives up on his quest for justice/vengeance/recognition, only to be drawn back in to a fight that turns out to be almost apocalyptic.

David Kirk's writing style captures the era and the characters incredibly well, bringing the period to life without getting bogged down in overly descriptive explanations of things like honorific terms or the different ranks within clans. In fact, he mostly sticks to English, referring to people mostly by their given names rather than family names, and only using Japanese terms for specific cultural concepts like seppuku, substituting other terms where appropriate (like "the Way" for Bushido or "masterless" for ronin). It makes for an easily-understandable reading experience that doesn't require additional study into Japanese history to follow.

And then there are the fight scenes, which are pretty amazing. Kirk has a way of putting the reader right into the middle of the action, describing movements moment-by-moment while making the reader feel each motion and impact, conveying the way the body moves, the instinctual reactions that Musashi makes, the exhilaration of victory, and the exhaustion of lengthy battles. This works wonderfully, and as the book proceeds, the scale of the fights build and build, until the climactic battle that pushes the adrenaline into overdrive and delivers on the expectations that had been building for the entire book. It's an incredible experience, one that won't quickly be forgotten.

As someone with an interest in Japanese culture, I found this book fascinating, and I highly recommend it. I'll be watching for the next installment, which will hopefully get to Musashi's duel with Sasaki Kojiro. In the meantime, I've got plenty of other Miyamoto-related media to consume...
Posted by Unknown at 6:30 PM