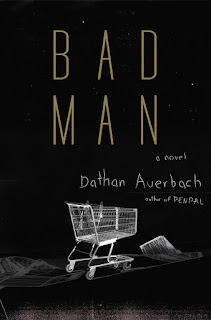 I don't read a lot of horror fiction, but I do occasionally check out the "creepypasta" stories that people publish online, some of which are very effective with the scares. So I was glad to get the chance to read this upcoming horror novel by an author who gained his fame through the online horror story Penpal.

However, I ended up being not especially satisfied with the actual book (I didn't like Penpal very much either, for that matter). Perhaps it's just my own tastes, but I felt like this one took much too long to get to where it was going, focusing more on the main character's turbulent emotions than on any spookiness that was going on around him.

The problem might be my own expectations; I thought this might be something of a supernatural story, but it turns out to be fairly grounded, although I wouldn't exactly call it realistic. The plot involves a young man named Ben whose three-year-old brother disappeared without a trace while the two of them were at a neighborhood grocery store. In the five years since the incident, he has been wracked with guilt and searched everywhere in town to find his brother, to no avail. After he graduates from high school, he looks for work to help his family make ends meet, but the only place in his small town that is hiring is the store where his brother disappeared.

So, he ends up working the night shift, and some strange stuff seems to be going on around the store, although less than one would expect in a book that's supposed to be scary. Instead, the focus is mostly on Ben's emotional state, including his continuing guilt, anger, and desperation, as well as his inability to trust anyone else. He's a complicated character, and not especially likable, prone to lashing out at people who care about him, obsessing about whether others are lying to him, and suspecting that nearly everyone around him is either involved in his brother's disappearance or just doesn't care enough to help find him.

I think that's the real focus of the book, and rather than going for scares, the kind of horror the author seems to be attempting is placing the reader in an unpleasant headspace. I wouldn't exactly call Ben an unreliable narrator, but you do get the idea that his internal sense of himself is different from what others see. He seems to think he's on a heroic crusade to find his lost brother, while he's actually causing a lot of pain to those around him and generally making things worse. And that makes what ultimately happens to him kind of fitting, if still pretty disturbing.

All in all, it's an interesting book that's fairly effective in placing the reader someplace they don't really want to be. It does take a long time for things to happen, but maybe that's by design too; Ben has been waiting for answers for five years, and he's stuck eking out a grim existence, with little hope for the future. Things are already sad enough at the start, and they just get worse, no matter how hard the characters try to make things better. In that way, it's kind of a fitting book for modern times. That doesn't make it especially satisfying or enjoyable to read though.
Posted by Unknown at 6:20 PM