My Sister, the Serial Killer: Is this more or less troubling than My Mother the Car?

My Sister, the Serial Killer
By Oyinkan Braithwaite
Published by Doubleday 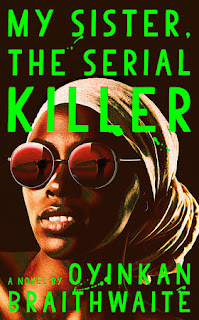 I remember reading an essay by Kurt Vonnegut in which he offered a piece of advice to aspiring writers: start a story as late in the action as possible. That's a strategy that Oyinkan Braithwaite follows in this, her debut novel, which begins with the eponymous murderer informing the book's narrator that she has killed her third victim. It's a great way to hook the reader, since when the title gives away what's going on, there's no need to explain a detailed origin story. Instead, we not only jump right into the action, but do so following a main character who goes about the morbid business of disposing of a body with resignation and frustration.

This approach also makes sense for the purposes of the book, which is less a tale of trying to cover up crimes (although that does factor into the plot quite a bit) than a character piece, with Korede, our narrator, struggling to balance a multitude of forces pulling her in opposing directions. She's the responsible one of the family, working as a nurse at a hospital in a hospital in Lagos, Nigeria, while her sister Ayoola seems flighty, irresponsible, and, of course, prone to killing her boyfriends without showing much in the way of remorse. But things get even worse for Korede when her work and home lives collide after Ayoola shows up at the hospital and begins flirting with Tade, the handsome doctor that Korede has been pining for.

So, there's something of a thriller element here, with Korede trying to make sure her sister isn't caught, but also desperately attempting to keep Tade from being Ayoola's next victim. But there's a lot more going on here under the surface. As the book goes on, we see that Korede and Ayoola are still living in the shadow of their late father, and the more we learn about him, the more we see that they are recovering from some serious emotional trauma, not just from him, but from a society that systematically allows men to mistreat women.

While Korede and Ayoola have different ways of dealing with this trauma, they are both attempting to reckon with the way the world treats women. While Korede takes a more traditional approach, she doesn't get much satisfaction from it; working as a nurse doesn't seem to be the balance that it should be against the grim nature of her home life, since she spends most of her time dealing with administrative hassles rather than actually helping people, and she doesn't get much recognition for her efforts. So who's to say that Ayoola's me-first approach to life is any worse? While her claims that she killed her victims (a series of boyfriends) in self-defense don't seem very plausible, they were likely to do some sort of physical or emotional violence to her at some point, so she just beat them to the punch. It's a horrifying, sociopathic way to live one's life, but given the statistics about the harm that men do to women, as well as her own experiences, she might be the most prudent character in the book.

This dark philosophy is pretty universal; the dynamics between men and women play out in similar fashion all over the world. However, what makes the book especially interesting is the specificity of its setting. For a reader like me who knows very little about Nigeria, there's plenty of nice detail here, from the words people use and the meals they eat to cultural customs they follow and the concerns of their lives, such as the frustration of dealing with local government. It's not the stereotypical depiction of Africa, and even though it's a slim volume, it really places the reader into a different world, one that feels lived-in and vibrant.

This is a pretty excellent read, a fascinating character study that keeps its plot steadily moving forward while doling out bits of backstory at just the right pace and giving the reader plenty to think about. I'm definitely glad I got the opportunity to read it.
Posted by Unknown at 9:54 PM