I blame Dick Hyacinth for this.
Breakdowns: Portrait of the Artist as a Young [Shit/Fuck]!
By Art Spiegelman 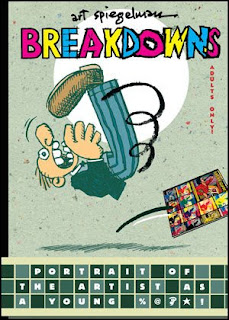 Art Spiegelman certainly deserves all the acclaim he's received for Maus (they don't give out those Pulitzer Prizes to everybody), and he's done some other work that deserves recognition (I still think In the Shadow of No Towers is pretty damn good), but as the new version of his long-out-of-print collection Breakdowns shows, that talent took some nurturing to become noteworthy.  The original book, which came out in 1978 had a very low print run, and it has been hard to find ever since.  But now it's back on shelves, published by Pantheon and given a fancy presentation and a lengthy comics-format introduction.  However, anybody expecting to discover lost works of genius will be sorely disappointed.  If you think the works of, say, Chris Ware are trite and navel-gazing, prepare yourself for the types of experiments in pointlessness that will make Ware's work look like a James Bond film.
But before Breakdowns proper starts (it gets a nice cardstock cover bound within the pages of the hardcover book), we get an introduction in the form of a comic strip called "Portrait of the Artist as a Young [obscenity]!", which was originally serialized in the Virginia Quarterly.  This is almost certainly the best part of the book, since Spiegelman is actually trying to communicate something to the reader: a look at his history and influences, showing what led him to become a comics creator.  It's generally pretty interesting stuff, giving us a glimpse into his childhood and his formative years as an artist.  There's some good emotional moments that Spiegelman illustrates while looking back (and forward) at his life, including realizing a sudden pain at the thought of his mother's suicide, thirty-five years after the fact; or the "gift" to his son of a horrible monster that feeds on low self-esteem.  And the anecdotes about his career and developing artistic sensibility are interesting; I especially liked a pair of scenes in which he shows his original "Maus" story to his father and some relatives, then to some fellow cartoonists at a pornographic magazine.  The relatives recognize the stories, having experienced them firsthand, but they don't even seem to notice that the story features cats and mice.  The cartoonists, on the other hand, don't even seem to notice the story, but compliment Spiegelman on his mouse drawings.
It's a nice series of strips, making for some good reading that mixes Spiegelman's entertaining cartooning with genuine emotion, and covering his reactions to his history and his present.  Unfortunately, it turns into a portent of what is ahead in the volume, as it ends with some incongruous strips in which Spiegelman plays with a narrative involving a cheating husband with no seeming purpose.  This devolves further into a series of quotes about comics and storytelling placed in captions and word balloons and having nothing to do with the art, which itself is just "remixed" panels from earlier in the story (or later in Breakdowns):

It doesn't make a lot of sense when you first read it, but after getting through the collection, it seems that Spiegelman was trying to capture some of his earlier experimentation.  He needn't have bothered; there's plenty more of that to come.
Then we get to the actual reprint of the original collection.  It starts off strong, with the original three-page "Maus" story.  It's a very, very short version of what Spiegelman would eventually develop, but the power of his storytelling is evident even at this early stage.  Presented as a bedtime story told to a young Artie by his father, we get just a small glimpse of the horrors that were experienced during the Holocaust.  As an early version of the story, it's not as effective as the longer book to come; Spiegelman here seems to go a bit far with the cat-and-mouse metaphors, going so far as to have the mice work in a kitty litter factory and refer to the man who betrayed them as a rat.  But it still gives a look at what was to come:

The other good story at the beginning is "Prisoner on the Hell Planet", which depicts Spiegelman's reaction to his mother's suicide.  It was also included in the Maus graphic novel, so many readers are probably already familiar with it, but it is nice to see it at its original size here.  As Spiegelman says in the afterword, its scratchboard art was influenced by German expressionist art, and the detailed linework is definitely visible here.  But while it certainly looks unique, the emotional impact is the real focus, with Spiegelman's raw, intense emotion on full display: 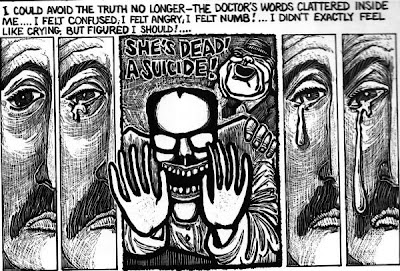 Unfortunately, the quality ends with that story; most of the rest of the book is concerned with inane noodling with the form of comics without actually doing anything very interesting.  Strips like "Little Signs of Passion" throw narrative out the window, choosing instead to focus randomly on little details in a scene.  That strip sets up a sort of narrative about a dwarf, a midget, and a gimp, but it just repeats the same three lines over and over in captions, alternating with a quotation about telling stories, with the imagery skipping between what seems to be illustrations of the story, close-ups of details from those illustrations, and pornographic pictures, with the dirty imagery ostensibly there because one character works at the box office of a porno theater.  Who knows what Spiegelman was going for here; my suspicion is that he was doing a lot of drugs.
"The Malpractice Suite" takes this non-narrative experimentation to the extreme, using panels from the Rex Morgan comic strip innovatively by putting them within a larger panel and extending their imagery outside of the panel to comment on it, or at least do something goofy with it: But while this is an interesting starting point, Spiegelman doesn't do anything with it aside from creating a series of increasingly wacky images.  There's no connectivity between panels; it's just a meaningless tableau of silliness.
There are some other stories that try to do something with this deconstructive approach, including "Don't Get Around Much Anymore", which tells a sort of story about an elderly shut-in by focusing on background details in their living space, or "As the Mind Reels", which messes around with soap opera tropes by switching between somebody watching a soap opera on TV and the soap opera itself, while maintaining the same melodramatic tone and simulating a fading signal.  These also play with some interesting ideas, but ultimately fail at the most important task: being interesting.  A one-pager called "A Day at the Circuits" also tries something unique, with arrows pointing to multiple other panels from many of the panels on the page, creating a "choose your own adventure" approach to the story.  It's an interesting idea, but the story is nothing more than two guys sitting at a bar drinking; maybe it could be interpreted as illustrating the go-nowhere life of the alcoholic, but that's a stretch.  It's more likely that Spiegelman thought of an idea but didn't have much of a story to plug into it.
Actually, the experimentation began with a one-page strip between the first two stories that is part of a series of Spiegelman's called "Zip-a-Tunes".  This one sees a skeleton do a somersault, leaving his Zip-A-Tone shadow behind halfway.  It's a kind of funny gag, although it's based in the intricacies of comics production that those outside the industry probably didn't know about even then and is obsolete now.  It's this kind of insular viewpoint that pretty much exemplifies most of the work here.
But not everything is bad here.  There are a few strips from a series called "Real Dream", which illustrate surreal dreams of Spiegelman's.  They're pretty effective at capturing freakish nocturnal imagery, and the artwork really sells the weirdness and dream logic of Spiegelman's subconscious.  A one-page bit about moving to New York, battling cockroaches in his apartment, and fighting depression works pretty well too.  And "Cracking Jokes", a comics-format essay about humor, isn't bad, dryly looking at the psychology behind a simple joke and illustrating how it doesn't work when certain basic details are changed.  It does seem especially non-humorous, but that's kind of a joke in itself.
Closing out the collection is the story "Ace Hole, Midget Detective".  It's still not great, but it's a step in the direction of trying to tell an actual story while using the deconstructive tropes explored in many of these stories.  It's a parody of hard-boiled detective fiction, with the titular character investigating a murder involving a cartoonist, an art dealer, and the dame who came between them.  Spiegelman illustrates this femme fatale with a full-on Picasso-style cubist look, making for some crazy panels, since it's hard to get a character like that to interact with more traditionally-depicted characters.  I especially like the way he depicts her going around a corner:

Of course, Spiegelman can't resist some weird experimentation, so he throws in some dream sequences that do some silly stuff that doesn't make sense (I do like the inclusion of imagery from Winsor McCay's Little Nemo though), but it mostly works in the context of the story.  It ends up being one of the better stories in the book, but only because so much of the material is so far below the bar.
So, I gotta say, I'm not seeing the genius here.  In the afterword, Spiegelman complains a bit that fellow creators at the time didn't seem especially interested in these stories, but he chalks it up to being ahead of his time.  I would say it's probably because it wasn't as interesting and revolutionary as he thought it was.  He definitely deserved all the acclaim he received for Maus, and arguably some other, later works, but this early material shows a developing talent that hadn't fully formed, and still had some distance to go.  Read it at your own risk, lest you get as annoyed as I did.
-----
Note: For more about the book, I recommend this interview with Spiegelman at Chris Mautner's blog.  It's a really interesting discussion about the book and Spiegelman's comics.  The second half gets into some "state of comics" talk and the requisite questions about what he's doing next, but that first half is some good reading, and very illuminating for someone like me who is still trying to process the damn thing.
Posted by Unknown at 7:49 PM