Fables: Where do we go from here?

Quick link:  Check out this excerpt of a cool-looking never-published adaptation of The Prisoner (the TV show) by Jack freaking Kirby!  Man, that's a match made in heaven; talk about one of those dream projects.  I guess we'll have to dream about what it would be like in toto.
Also, here's a free educational comic by such fine folks as Rick Veitch, Todd Klein, Lauren Weinstein, R. Kikuo Johnson, and Josh Neufeld, among others.  It's a tie-in with the PBS show Nature.  Nice.
Okay, to business:
Fables, volume 11: War and Pieces
Written by Bill Willingham
Art by Mark Buckingham (with Andrew Pepoy and Steve Leialoha) and Niko Henrichon 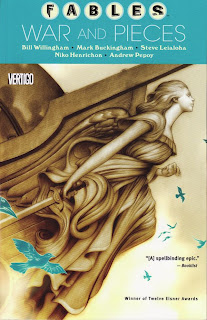 What to say about this series at this point?  If you're already on board for the series, you probably really dug this volume, and if you're new to the story, this is certainly no place to start.  It's still interesting to talk about it, but since this is from the perspective of a devoted fan, it might not be all that interesting to read, unless you're coming from a similar frame of mind.  Even so, this volume's big events merit some discussion, if only to gasp in awe at the developments.
And along those lines: whoa.  Wow.  This is big.  And so on.  The story goes that Bill Willingham had an endpoint in mind for the series when he started it, but he's enjoying the world he created so much that he doesn't want to quit doing the book.  But he decided to go ahead and write that ending storyline anyway, but keep going afterward.  Which is a pretty damn bold step, considering that the main plot of the series has almost entirely focused on Fabletown's conflict with the Adversary and his forces.  Removing that aspect of the book entirely upends things, adding an exciting status quo that could literally go anywhere.
But we're getting ahead of ourselves here; this volume sees the culmination of the storyline that has been steadily building pretty much since the beginning, but at least since volume four, March of the Wooden Soldiers.  The book kicks off with an enjoyable interlude based at The Farm, in which the animal fables are given the opportunity to move to the kingdom of Haven, which was established last volume.  But a lot of them don't know if they want to go, since they've gotten used to the technological conveniences of the mundane world: 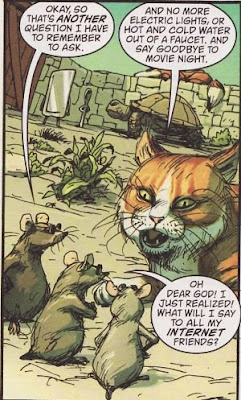 There's also some romantic developments (or undevelopments) between Boy Blue and Rose Red, and some planning for the upcoming war, but it's mostly a breather before the action starts.  And it's really nicely illustrated by Niko Henrichon, who gives it a scratchy, energetic feel that's an interesting departure from Mark Buckingham's usual style.
But things get moving, sort of, in the next story, which sees spy extraordinaire Cinderella embark on a mission to rescue a certain important "package" that arrived through the portal to another Fable world.  It's a two issue story, and it's an action-packed bit of business, with lots of gunplay and chases, ending in a dramatic, violent fight on the streets of New York.  I love Buckingham's art here, especially the way he sets off Cindy's scenes by having her logo run down the sides of the page and gives her a stylish James Bond (or maybe Emma Peel) wardrobe: 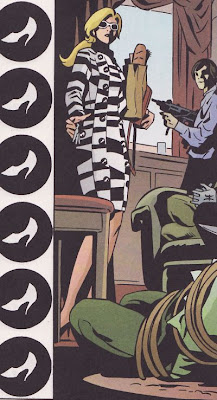 And the action is exciting and hard-edged too; for a story starring Cinderella, there's a whole lot of bloody gunshot wounds.
But it's not until the next chapter that the war kicks off in earnest, and the rest of the book is a doozy.  We've gotten a hint of the plans for the war, but seeing them put in action is something to behold.  Said plan involves a flying carpet-powered airship carrying makeshift bombs, a sort of sleep-causing magical suicide bomb, and a beanstalk-based exit strategy.  The entire thing is narrated by Boy Blue as he teleports from front to front, carrying messages and delivering supplies, and it's all matter-of-fact.  That's one of the things Willingham does so well in this series; he makes all the magic believable by describing it in down-to-earth terms.  But it's still fantastical enough to be exciting and dramatic, especially when we get huge, chaotic scenes of dragon attacks: 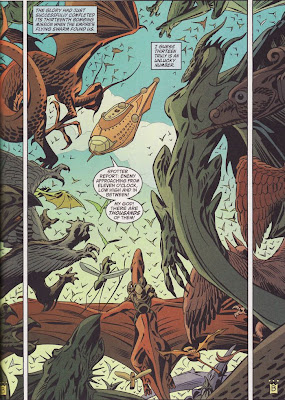 And a climactic scene in which thousands of monsters and magical animals meet on the battlefield is a thing to behold.  Not to mention a final duel between the Emperor and Bigby Wolf, which is powerful and awful to watch:

Wow; it's probably the sheer scale of what's going on here, but I'm damn impressed by how well Willingham brought this together and paid it off.  For fans of the series, it's some mighty impressive, awesome stuff.
And then it ends, and we're suddenly left with a brand new status quo (watch out for spoilers), in which Gepetto, the feared Adversary, has joined Fabletown and been absolved of any wrongdoing.  Who knows how that will work out.  And now the good guys have the run of all the Fable worlds again, which should offer myriad story opportunities.  I'm curious as to what happened to Briar Rose; she basically agreed to sacrifice herself to shut down the Adversary's capital, but she's still sleeping there with the possibility of being woken up.  And who would be the perfect candidate for an awakening kiss but Prince Charming, who seemed to die heroically, but could very well have survived.  And I'm sure there are plenty of other stories waiting to be told that I haven't even considered; that's how good Willingham is at this (end spoilers).
So yes, it's pretty much everything that it could be, actually delivering on the promise of what had been building.  That sort of thing is tough to pull off, but Willingham and company have done it just about perfectly.  Who knows where they're going to go next, but it's a big new world of possibility, and I for one can't wait to see what they've got planned.
Posted by Unknown at 8:16 PM