All right, it's time to see whether I can turn myself into a character from this manga through intensive exposure.  I've got eleven volumes to go, and only so much reserves of obsession.  Let's see how much I can deplete.
But first, a quick link: Neil Cohn is running a nifty, science-y comics-based survey at The Visual Linguist, so go participate.  You'll see what it's all about when you get there.
Monster, volume 8
By Naoki Urasawa 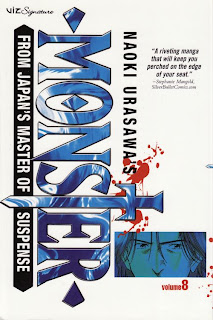 Even given the long gap between my reading of the previous volume and this subsequent one, I was able to jump right in and barely feel like I had to work to catch up.  Naoki Urasawa somehow continues to build the tension leading up to the showdown between Tenma and Johan that looks like it will take place around the series' halfway point (by volume number, at least).  But while we get scene after scene of characters having tense conversations, it never feels padded or extended beyond what is necessary.  In fact, the opposite is true, since the myriad of characters and plot threads all work to enrich the narrative, working together to weave a complex, fascinating tapestry.
In this volume alone, we see Tenma's plans to assassinate Johan and Nina(or is it Anna?)'s search for both of them, while allies of Tenma try to find him and stop him from destroying himself through violence, and Inspector Lunge continues to track the case mercilessly.  And we get some more face time with Johan, who manages to seem even more creepy when we see him in person than he was as an off-panel menace.  In an especially freaky bit, we see that his previous scenes in which he mingled with children weren't just there for horrific effect; he seems to be recruiting followers, trying to brainwash the kids into his Nazi-esque way of thinking through a suicidal game (I found it to be reminiscent of the Wheelchair Assassins' initiation in Infinite Jest, but I'm probably the only one).  And the image of a wounded child calls to mind the image of Johan as a child from the first volume: 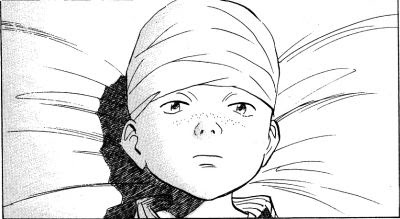 That actually kicks off an interesting chapter involving Tenma's "ward" Deiter, acting as a sort of contrast between Tenma's and Johan's ways of life.  But then we get back to Johan and his weird ways.  It looked like he was angling to gain financial and political power by getting close to the influential Herr Schuwald, but we learn here that as complex and layered a plan as that was, it was just a sort of game for him, as is his baiting of Tenma; he seems prepared to receive the assassin's bullet, but maybe his survival from a previous gunshot wound to the head makes him think he's invincible.  He's inscrutable, seeming to never react to anything with an emotion other than bemusement, so it's especially unnerving to see him freak out when he happens across a children's book that seems to have something to do with his murderous impulses: 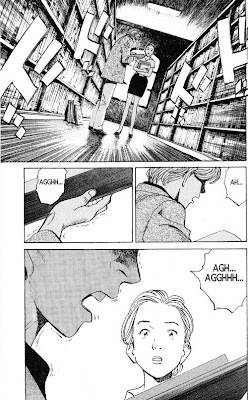 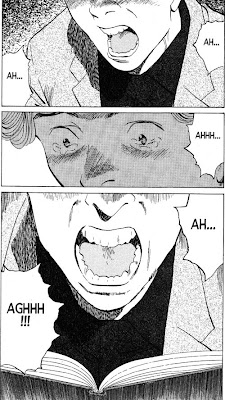 Urasawa stages that outburst especially well, seeming to pull back from a closeup, but never actually showing the full face.  The segmented view of his features make the scene especially creepy, not allowing us to actually relate to the character.
As always, it's an excellent installment of the series, building up to a confrontation in a way that compels the reader to keep turning the pages, while never sacrificing character.  It's fascinating to watch Urasawa work, but it's easy to ignore the fact that he is doing so, since he makes it so easy to get caught up in the story that you don't realize how well he's telling it.  Now I'm ready to blaze through the next volume and find out what is going on with the weird Czech book that turned Johan into a Monster.
Posted by Unknown at 8:00 PM