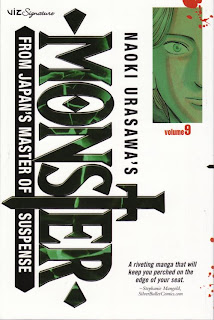 I worry that I might run out of interesting things to say as I blow through these volumes in quick succession, but that feeling doesn't last long whenever I read them; Naoki Urasawa is such an amazing storyteller, he always provides plenty of fodder for discussion.  This volume, for instance, consists almost completely of a big confrontation between Dr. Tenma and Johan, the fiend of the title, but there is so much going on around them that the story doesn't feel like it's padded to fill an entire volume.  Johan has some scheme going on with rich financier Schuwald; Johan's sister Nina seems to have discovered a key piece of their childhood; Dr. Reichwein and Deiter are trying to stop Tenma from doing something he'll regret; Inspector Lunge is pursuing Tenma while refusing to admit that Johan exists outside of Tenma's head; and Johan's creepy hired muscle gets involved, of course.  What is an already tense moment becomes even more so as all these characters and plots converge on the same point, making for some breathless storytelling.  As always, the reader is left astonished at the skill on display, if they even have time to stop and think as they are turning pages as fast as possible to find out what comes next.
It's incredible to watch, but Urasawa manages to continue to develop characters and insert striking moments in the midst of the action.  We get a chance to see the odd picture book that freaked Johan out in the last volume, and it's quite strange, but doesn't exactly explain his mindset (if such a thing can even be explicated).  Called The Nameless Monster, it's about, obviously, a monster, who roams the land consuming people and stealing their identities: 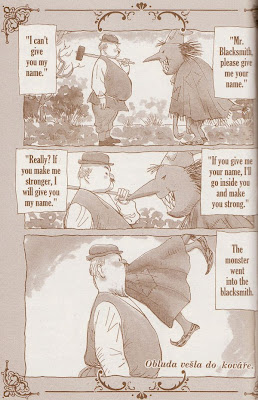 Urasawa presents the story in its entirety as a section of the book, setting it off by giving the pages a sepia tone.  It's a weird little tale, but while it's kind of creepy, it's only a slight clue, if even that.  Really, Johan is unexplainable, but Urasawa walks a fine line, making us think we can understand what might be going on in his head, but never revealing enough to ruin the mystique.  That's assuming he doesn't lay everything out in future volumes, but he's a good enough storyteller that he probably won't make that misstep, at least not without a good reason.
In the meantime, Tenma hides out in the library where Schuwald is donating his book collection, in hopes of shooting Johan with a sniper rifle at the official donation ceremony.  He's obviously conflicted about the act, since, as a doctor, he's supposed to preserve life, not take it, but he still feels responsible for having loosed Johan upon the world.  This leads to the expected tension when the moment for the assassination finally arrives, but Urasawa plays it well, and doesn't let it drag on too long, especially after the henchman shows up: 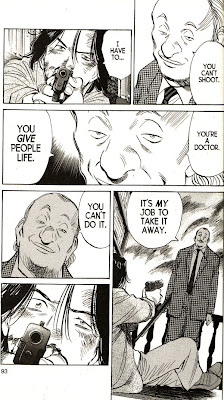 Instead, the situation gains an unexpected twist when a fire (planned, of course, by Johan, who became tired of trying to manipulate the economy through Schuwald and decided to just play with people's lives for the pure entertainment value) breaks out, causing all the spectators to run wild trying to escape.  And in the midst of it all, Johan watches passively, quietly delighted at the chaos he's caused: 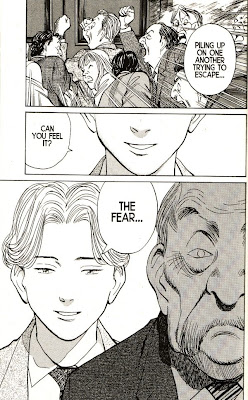 He also gets a supremely chilling moment with Schuwald: 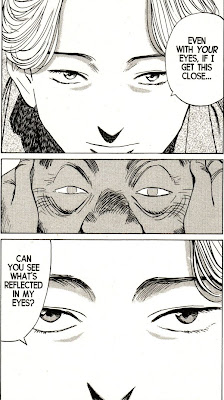 Scenes like this are amazing; Johan isn't an unknowable horror, but something that seems just barely outside the realm of understanding, and that makes him all the scarier.
There's plenty more going on in this volume, including a nice scene in which Lunge visit's Johan's former living quarters, and he appears to be stumped; his fingers, which are usually twitching non-stop as a cue for his mental note-taking, remain silent, since there is simply no data to be gathered: 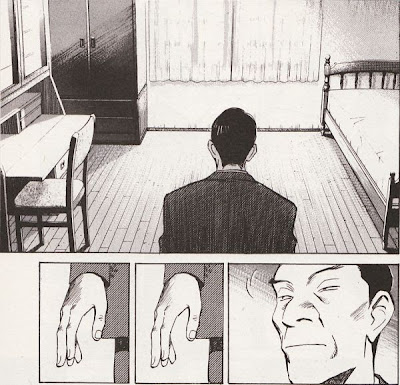 As a midpoint in the story, it's an excellent bit of action, with some elements that set up the continuing mystery that will evolve over further installments.  I am continually amazed at how gripping the series is, with each chapter making me near-frantic to read the next one, and this volume is no exception.  I'll be rushing through the next one as soon as possible.
Posted by Unknown at 9:00 PM