Still going strong, even though birthday celebrations slowed me down last week.  That's right, my daughter is one year old already.  Yikes.  Next thing I know, she'll be in high school.  Gotta distract myself from the aging process:
Wait, one link: Andrew Hickey started a fascinating discussion about adaptations in general, and Watchmen in specific, asking what the ideal movie adaptation of the comic would be like.  I liked his version, but the one Jog offers in the comments is pure genius.
Or two: while we're talking Watchmen and adaptations, Canada's National Post has a comic illustrated by Steve Murray (a.k.a. Chip Zdarsky) that details the circuitous path taken between the book being published and the film finally being made.  Hat tip: Chris Butcher.
Monster, volume 12
By Naoki Urasawa 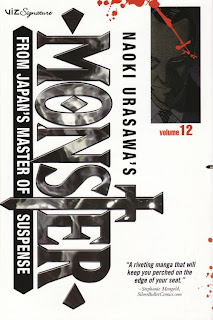 The mystery of Johan's origins deepens here, and some exciting new complications are added to the plot, making for an excellent volume, but the highlight here: Lunge on a vacation!  Nah, that's not really the best part, but it's kind of funny that he shows up in Prague, where the rest of the characters are already hanging out, and gets involved in the case again almost by accident.  He seems to be actually trying to relax, but he's also there to get a translation of the infamous picture book that has been a key to the series lately.  But when talking to the local police chief about the big case involving Detective Suk and Mr. Grimmer, he slips right back into his investigative habits, collecting data in his own unique fashion: 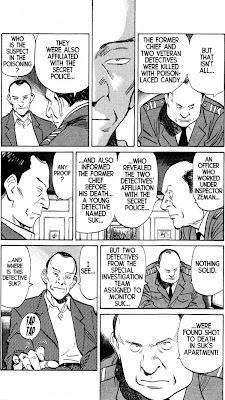 He also gets to investigate the writer of the creepy book, who we've learned is tangled up in Johan's past.  He definitely has some involvement with the Czech secret police, but could he also be Johan and Anna/Nina's father?  Lunge comes across some interesting clues, including some sketchbooks and a sealed room in an abandoned mansion.  As happens so often in this series, we're left hanging as to his conclusions or follow-ups to his findings, as the plot lurches elsewhere.  But we'll certainly return to this, even if Lunge gets distracted by what happens later.  But for now, we get some really well-done scenes, especially in the way Lunge's tension ratchets up as he finds himself drawn into the local intrigue: 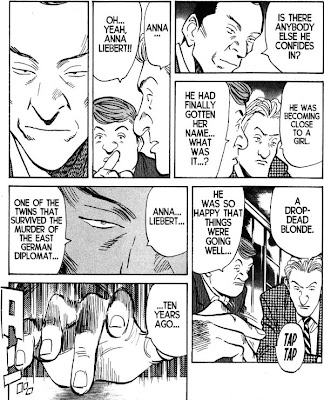 We saw him almost absentmindedly typing above, but here he's back into his usual data-collection methods, his hands working themselves into a fury, until he realizes there's no going back: 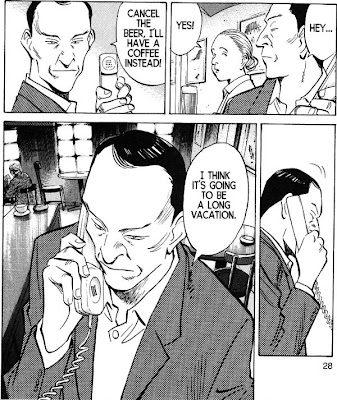 I love the way Urasawa paces this, especially since we're already familiar with Lunge's obsessiveness.  Once the case gets a hold of him, It's only a matter of time before he's in too deep to back out.
Urasawa's art is as great as always, with the sketchbooks looking especially nice.  They really appear to be artwork within the world of the comic, differentiating themselves from the linework that depicts the events that we are seeing, but still showing recognizable characters: 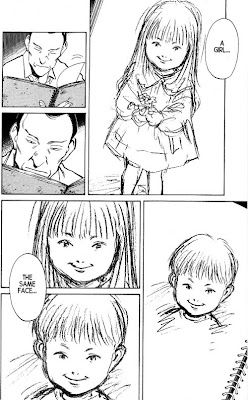 I think what seals the deal is the expressions on those kids; we've seen that before, and it's some creepy shit.
But Lunge's story is only a small part of the book.  Another highlight:  the return of Eva, Tenma's ex-fiancee!  She last showed up way back in volume 6, which saw her spiralling into alcohol-fueled despair.  Here, she pops back up again, demonstrating her old moxie, along with a possible hint of regret: 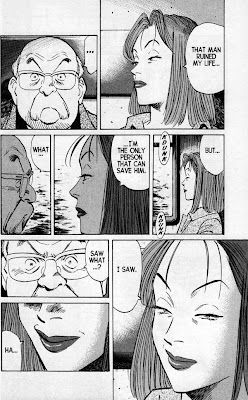 It's only a short appearance, but it's a promising one.  There's a major event that happens in this volume, but I'm sure will be a big focus in the next installment, so I'll reserve commentary until then.
No, the real centerpiece of this volume is another harrowing sequence involving Johan's manipulations.  We've seen him casually ruin lives before, but this one seems worse, because his victim is an abandoned child who just wants to find his mother.  Knowing that the boy was the son of a prostitute who left him at an orphanage, Johan (who is disguised as Nina, which somehow adds to the creepiness) sends the kid on a quest through the red light district to find her, exposing him to the cruel nature of the world in what seems to be an attempt to crush his spirits: 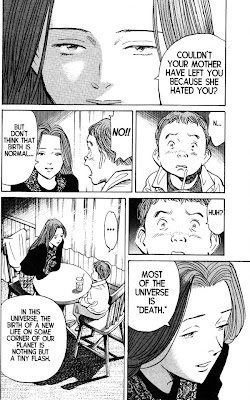 This sort of thing is like a hobby for Johan, and he's damn good at it.  The following sequence is hard to watch, since we know nothing good can come of the kid's search.  Tenma and Grimmer race to find the kid before the worst happens, but given Urasawa's track record, we feel like anything can happen; he's definitely heartless enough to off a kid if it's necessary.
It's another good volume, although I found one thing to complain about, that being Grimmer's continued anxiety about not knowing what he should feel.  He repeatedly asks Tenma what emotions he should be expressing, and it gets a bit tiresome.  This is probably a quirk of reading what was initially a serialized story in collected form, but it's surprising to see Urasawa strike a sour note when he seems to be in such perfect control the rest of the time.
Still, that's a minor quibble, and one of the very few that have popped up at all over the course of twelve volumes.  With all the rest of the intrigue and excellent storytelling, it's easy to ignore.  Instead, I can focus on the questions raised by scenes like the one in which a character remembers seeing Johan and Anna/Nina as children: 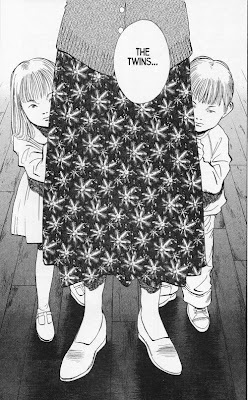 They seem near-identical there, both sporting that familiar malevolent smile.  What happened to turn Johan into a monster, while Anna escaped relatively unharmed?  Did the evil come from nature or nurture?  Will Urasawa define the "darkness" that characters keep referencing, or is it just a nebulous force of evil?  The thing is, these questions could very well be left up to the reader to decide, but I feel like Urasawa plans to answer them, at least partially.  I hope he doesn't let me down.
Posted by Unknown at 10:20 PM