Quick link: I love this picture from Sergio Aragones' museum exhibit. He's one of my comics heroes, and probably my top creator that I want to meet someday. I'd love to go to Ojai and see this thing.

Finally getting to this one:
Pluto, volume 4
By Naoki Urasawa 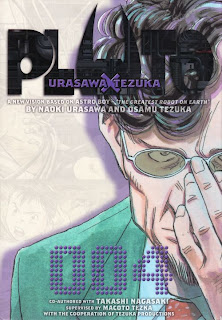 I worry sometimes that I overpraise Naoki Urasawa, since my reviews of his books are pretty much universally laudatory, falling all over myself to call the man a genius. But I really do think he deserves it, and this volume of his update/re-imagining of Osamu Tezuka's work has some great examples of why, starting with a surprisingly touching scene in the first chapter in which Professor Ochanomizu tries, and ultimately fails, to repair an obsolete robot dog that he found: 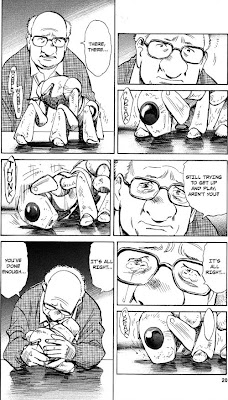 That page hits me so hard every time I read it, with the way the dog struggles to its feet and tries to soldier on, seeming like a sad old pet even with its inexpressive mechanical visage, and the tears slowly well up in the Professor's eyes. That takes skill, to wring tears from a reader with a scene about a guy unable to complete some repairs. But it also sets up what's coming wonderfully, as we see how Ochanomizu cares about the beings that he has helped create with his advancements in robot technology, believing that they are capable of so much and wanting to recognize them as living, breathing beings.
And that's where things get especially interesting, as a man shows up claiming to be the owner of the dog but turning out to be much more, a representative of the shadowy, sinister cabal that's behind the recent killings. He wants Ochanomizu to summon Atom to fight (or be destroyed by) Pluto, but the Professor refuses, and the two of them have one of those amazingly tense conversations that Urasawa does so well, debating whether robots can kill, and the way the attempts to make them more and more human conflict with the desire to suppress their lethality: 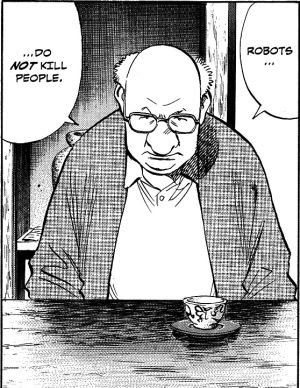 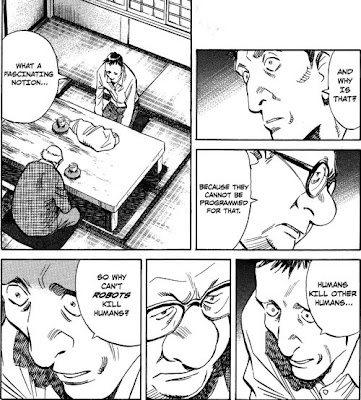 It's a fascinating idea, and one that seems to be growing into the core of the series, but just watching Urasawa set up the characters and play them off each other is fascinating as well. The emotion that comes through on their faces is perfect, like Ochanomizu's cold anger above. And the facial expressions of his verbal sparring partner are just wild-eyed and inhuman enough to betray his robotic nature. As always, it's gorgeous, gripping work, and that's just in this character interaction, not even taking the amazing high-tech scenery and glimpses of big action that fill the rest of the book.
Yes, Atom does end up fighting Pluto, and he doesn't seem to survive, which is an abrupt, shocking turn, and one that will surely prove to be a false demise, especially considering how it basically happens off-panel. But Urasawa does like to go for the unexpected, and that's what he does here, focusing instead on the reactions of other players, like Gesicht and the other remaining Greatest Robots on Earth. But he doesn't have much time to mourn, since he's busy protecting Adolf Haas, the man who has sworn to kill him. That's a source of juicy drama there, and Urasawa keeps the tension simmering throughout. But he also continues to reveal secrets in drips and drabs, with some revelations about the war that weighs so heavily on everyone's minds seeming especially important, and some discovered footage of the Saddam Hussein-like leader of "Persia" appearing to show him giving a chilling execution order for the group of scientists who have been recently dying. And we also get some hints of the underlying issue, as Atom's creator Dr. Tenma is shown to have been vehemently against further development of artificial intelligence, since to create a perfectly human robot would place powerful, possibly devastating technology in the control of an imperfect being that is slave to its emotions and human failings. And that seems to be exactly what has happened with Pluto himself; only future volumes will tell if the world survives it.
As always, it's exciting, dramatic, gripping work, full of stunning art and engaging storytelling. I wouldn't expect anything less from Urasawa, but somehow, he continues to astonish and amaze me. That's pretty exciting to experience, and considering that the series is only halfway through, there should be plenty more amazement to come.
Posted by Unknown at 8:00 PM