12 Things I learned from Supermen! 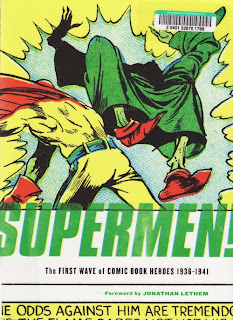 The Greg Sadowski-edited collection Supermen!: The First Wave of Comic Book Heroes 1936-1941 is quite nice, full of crazy Golden Age superhero stories from the dawn of the genre. Here's some stuff I found out while reading.
1. "Superhero" can be pretty loosely-defined
The early crime-fighters took several different tacks in their missions, not just limited to the spandex-wearing, power-having musclemen we're familiar with (or perhaps the scope of this book was widened to include some good stories in tangential genres or by famous creators). The heroes here include space-faring adventurers (who also often fight crime), occult-manipulating magicians, whatever the hell you call Fletcher Hanks' heroes, guys wearing masks, and one adventurer in a vast underground kingdom. That's a motley crew, but an entertaining one.
2. In these stories, disbelief must often not only be suspended, but strung up and mercilessly whipped, then drawn and quartered
That metaphor got away from me, but the point is that the stuff these creators came up with is pretty nuts, the kind of thing that anybody with any knowledge of the world would find ridiculously childish today. Maybe that's just an indication of the intended audience, or maybe the fact that people knew less about the world back then opened up more avenues for possible ideas that would just be too far-fetched today. For instance, in Will Eisner and Lou Fine's "The Flame", a gangster brings back a bunch of natives from "an unexplored section of the Gobi" who live for hundreds of years, have super-strength and skin so tough that they're impervious to bullets, sport skull-like visages, and are so childlike that they'll follow anybody's orders. That's just nuts. It does make for a good visual though: 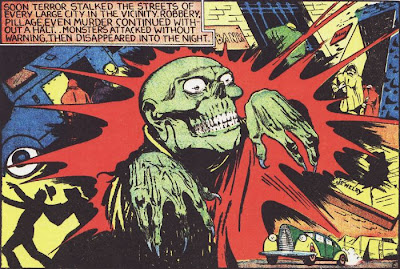 3. Will Eisner could draw great facial expressions and sexy dames as early as 1939

4. While Jack Kirby was never Leonardo Da Vinci, his grasp of human anatomy certainly got better when he was older
Just look at the freakish Cosmic Carson in this panel: 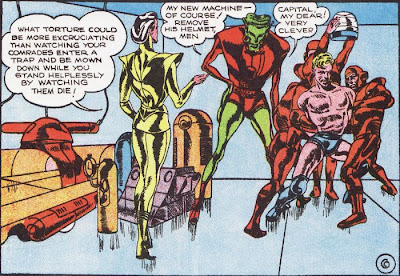 The story around it is fairly unreadable as well, but mostly due to a coloring job that sees Carson's spacesuit switch to a different hue each panel in the middle of a fight scene, making it impossible to tell what is happening.
5. The stories within comic books often don't match the covers, but I can't imagine not wanting to buy these and find out what's inside
Wow, check out this amazing piece of work by Will Eisner and Lou Fine: 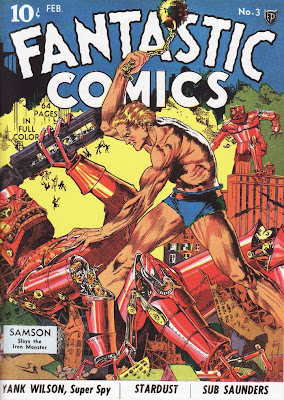 Holy crap! And this grotesque beaut by Jack Cole is arresting for a completely different reason: 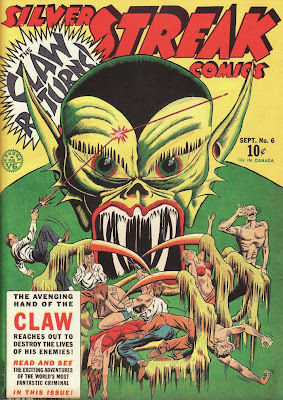 6. Yes, Fletcher Hanks was totally insane
Everybody knows this already, since the publication of I Shall Destroy All the Civilized Planets! and You Shall Die By Your Own Evil Creation!, but I'm late to the game, so the two Hanks stories presented here, featuring Stardust and Fantomah, are enough to convince me that his comics are worth reading for all their demented energy. I can't say they're actually good, but they're certainly something. I'm especially impressed by a moment where Stardust rescues a woman who's too frightened to go home, so he hits her with an anti-gravity ray and leaves her hanging in mid-air while he goes and kills a bunch of space vultures. What a bastard.
7. Marvelo, Monarch of Magicians, has the most convoluted plan for stopping crime ever
In this story by Gardner Fox and Fred Guardineer, Marvelo comes to America and only gets caught up in the crime-fighting game when some gangsters try to shove him out of the way and get in his taxi. So he turns them into pigs and raises the ire of the head gangster, Big Shot Bonnet. A few seconds later, Bonnet's guys do a drive-by on a rival, so Marvelo whips up a cyclone that deposits their car on top of a skyscraper. Big Shot then decides to rob the Treasury, but Marvelo finds out, so he stops the armored car on the way, making it fall apart and put itself back together to show off for the guards, then drives it up and has some skeletons get out to scare Big Shot, and turns the gold into gravestones bearing his name. Then he makes a statue of George Washington come alive and carry the goons off to jail, but lets Big Shot go to try to scare a confession out of him. He makes Big Shot think everything he touches turns to gold, prompting him to break out a pickaxe and start taking apart a subway platform. When he comes to his senses, he decides a rival gangster is causing the visions, so he goes to confront him, but when he gets there and they're about to shoot each other, Marvelo turns their guns "spongy", then whey they try to beat him up, he confuses their sense of direction, turns one's limbs rubbery, and makes the other melt into a puddle of liquid. So they decide to confess (to the robbery that only one of them was already caught committing, I guess), and that's the end of crime in the city!
Wow, that's a completely nonsensical story, a perfect example of "just make some shit up, we gotta fill pages" writing. It's hilarious in a "what the fuck?" way, but it's pretty goddamn awful overall.
8. Skyman has to be the most badass pilot in history
This story, by Gardner Fox and Ogden Whitney, is the same sort of thing, with our hero filling pages by fighting "foreign" invaders, but he's pretty awesome, singlehandedly shooting down at least two squadrons of enemy planes, swinging into an enemy plane in mid-flight via rope so he can interrogate the pilot, crashing, getting shot, and managing to shut down an "electrical belt" in the nick of time before it could destroy American planes. And look how buff he is, hauling bombs around so he can blast those dirty foreigners:

This is another one that doesn't make any sense, but it's pretty damn entertaining.
9. Jack Cole came up with some pretty crazy-ass viewing angles when drawing the Silver Streak
The Silver Streak is a speedster, which gave Cole some opportunities for dynamic running action. I love the way he places the readers' point of view at ground level in the following panels (which are non-sequential and also include an amusing bullet-dodging pose), staring straight up at the hero's crotch:

And I don't mean that as a "tee hee!" comment; it's a nice way of making the action move and appear fast and exciting. The story itself is pretty silly (although there's some good comedy that comes from a housewife constantly getting the hero's name wrong, calling him the Brass Streak, or the Lead Streak), but it's a good example of Cole's artistic chops.
10. Jack Cole was also racist (like most everyone else at the time), but that doesn't stop him from being ridiculously entertaining
The other Cole story here features the original Daredevil, fighting the giant, fanged Yellow Peril monster the Claw, who is some sort of war god from Tibet who has his minions tunnel underneath the Atlantic Ocean to attack New York. It's ridiculous as ever, but it's full of stupidly awesome action, with Daredevil taking out goons with a boomerang that appears to be two pieces of kindling nailed together at a right angle, getting out of a pit by running around the sides so fast that he comes right out the top, turning his own body into a boomerang when the Claw tries to fling him into the stratosphere, and then taking out the monster from the inside: 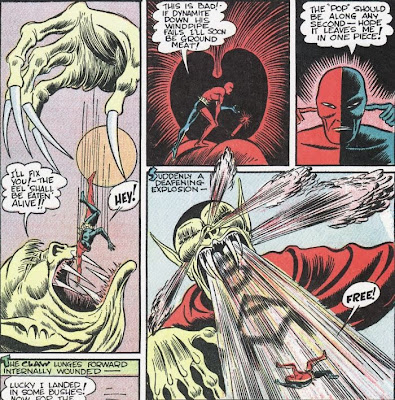 Damn. So racist, but so entertaining.
11. Basil Wolverton drew awesome monsters as early as 1940 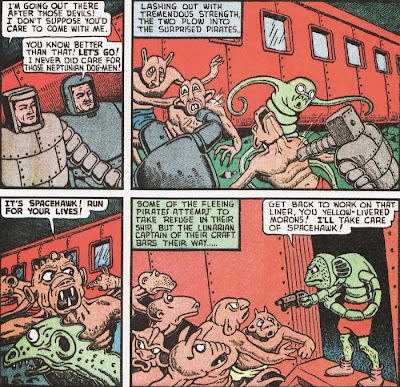 His spaceships and spacesuits were kinda clunky though.
12. Jack Kirby got better by 1941, but he still had a long way to go 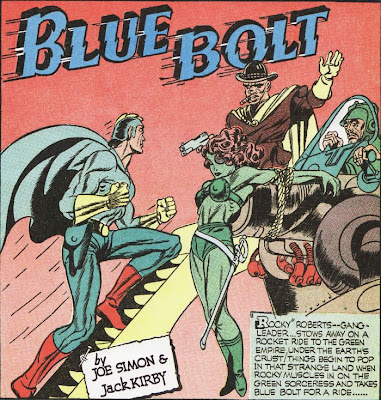 I can barely make heads or tails out of this Blue Bolt story by Kirby and Joe Simon, but it's got some nice art, like the sexy Green Sorceress and her riveted metal bra or the occasional dynamic action. It has something to do with a stereotypical gangster trying to take over an underground kingdom, but it doesn't make much sense at all and features some pretty poor panel layouts to boot. Considering how great Kirby would get, it's weird to see him at such an early stage in his development.
-----
There are plenty of other lessons to be gleaned from the book, and it's a pretty fascinating look at an early stage of comics' development, but I don't know if I could really recommend it as actual good comics. There's some really nice art, and a lot of the stories are enjoyable in their batshit insanity, but that doesn't necessarily make them very good. Depending on your tolerance for idiocy and interest in history, you might or might not like it. I did, for the most part, but it's definitely a mixed bag.
Posted by Unknown at 10:30 PM