Stitches: Not the type from laughter, presumably

Manga links: Kurutta, a blog that chronicles some interesting Japanese ephemera, has some images from Osamu Tezuka's adaptation of Crime and Punishment, which he did early in his career. Even at that young age, he was doing some pretty incredible stuff; check it out.
And I'm late getting to this, but the new book by classic yokai manga creator Shigeru Mizuki that's full of cutaway diagrams of monster anatomy looks pretty awesome. This blog has some excerpts. So, when is somebody going to get around to translating GeGeGe no Kitaro?
Stitches
By David Small 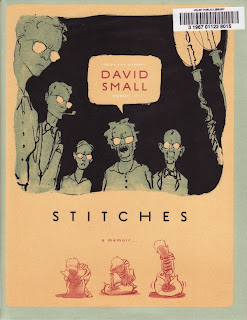 It's hard to know what to make of this book, and that's even setting aside the minor controversy that resulted from its nomination for a National Book Award, but only in the "young adult" category (a short response: it doesn't seem like a young adult book, especially considering its fairly sedate pace, but it's not inappropriate either; kids might be able to gain insights about the value of life and the difficulty of family relationships, but they probably won't be all that interested. It certainly seems like more of an adult book than a teen one). David Small is a popular illustrator of children's books, but he has set aside his cute, cheery style for a gloomy, oppressive one here, in a story detailing his troubled childhood, which was weighted down by a closed-off, uncommunicative family and the medical troubles whose results give the book its title. It's a pretty effective tale, and probably one that allowed Small some therapeutic release in its telling, but there are some strange choices, and, as goes the common complaint with so many modern autobio comics, one wonders what the ultimate message is, beyond "Here is what happened during a portion of my life."
Small certainly had a difficult childhood, and he attempts to chronicle that difficulty through showing his parents' strained relationship, his mother's description of her parents' shotgun marriage, his grandmother's poor treatment of him and his mother, and worst of all, the indifference they seemed to show toward him when he had medical problems. That's the hardest part of the book to read; when young David develops a growth on his neck, a doctor colleague of his X-ray technician father recommends having it surgically removed, but for some reason, his parents didn't do so for three and a half years. Early on, his mother gives him a reprimand, saying that they don't have a lot of money, but during that period between diagnosis and treatment, they went on a spending spree, buying cars, boats, furniture, and plenty of other possessions in an apparent attempt to keep up with their richer friends and fit into the materialistic lifestyle of the 1950s. It's a callous display of priorities, and you can't help but feel for poor David, especially as he was too young to really understand any of it. And when he finally does get his surgery, the problem turns out to be worse than expected, adding even more misery to his life. As he grows older and more independent, he turns rebellious and angry, an understandable response to the awful way he had been treated, but no less difficult to watch than anything else he went through. He eventually comes to terms with his life through the help of an empathetic psychologist, and as an adult he gains some understanding of his childhood circumstances, but it's obvious that even fifty years later, he still has plenty of scars.
So, yes, it's an interesting story, but there are plenty of loose ends that never get followed, and Small seems to vacillate between a factual retelling and an attempt to replicate his childhood emotions. He hints at deeper issues with the family and trying to understand his parents' reasons for what they did, but backs away in favor of exploring his own mental state. An afterword apologizes for this slightly, saying that if this had been his mother's story rather than his own, he would have examined her life more closely, but that seems like a cop-out and an excuse for solipsism.
But even in his own narrative, there are paths set up but never taken, including several allusions to Alice in Wonderland that are never fully explained. The first one is obvious, as Small shows how at the age of six, fascinated with Lewis Carroll's book, he would pretend to be Alice, tying a towel to his head in imitation of her long hair and gallivanting around the neighborhood. This led to bullying from other kids who accused him of homosexuality, but Small never explores how any of this affected him, other than prompting him to escape into his artistic creations. Later, he tells of recurring dreams that seem like something out of Alice, in which he explored tunnels in a destroyed church, but never gets around to an explanation or even speculation as to what they might mean; why include them? Finally, the aforementioned therapist is depicted as a huge white rabbit for some reason (maybe because he has a watch that tells when it's time to stop the sessions, or because he refers to Small's life as "curious"). Considering the mostly realistic nature of the rest of the imagery in the book, it's rather odd to drop something like this in and never explain it.
But while the book has its problems, it gets a lot right as well, delivering some impressively evocative imagery and poignant moments. Small's reaction to a harsh revelation in therapy is one of those, as is the scene when he discovers a major secret of his mother's. The artwork is also rather impressive throughout, rarely letting up in its ink-washed gloominess. An early scene in which Small stumbles across a preserved fetus when exploring the hospital where his father works is a great moment, effective evoking the childhood terror that can come from a runaway imagination: 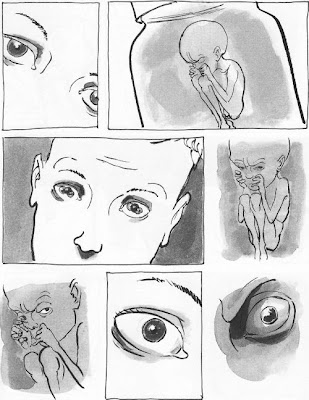 Small's style is especially effective when contrasting the cold, harsh treatment he received from his parents: 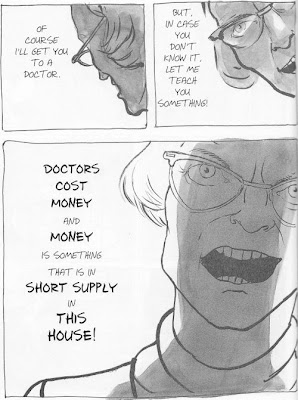 With their effusive joy at spending their money on more and more things: 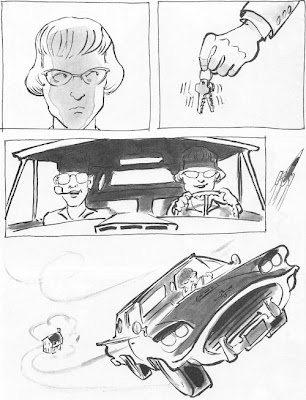 Small does occasionally attempt to depict the world around him during this time, and the occasional page of scenery is also rather arresting, as in this image that makes the signs and decorations on the street seem like ephemeral phantoms: 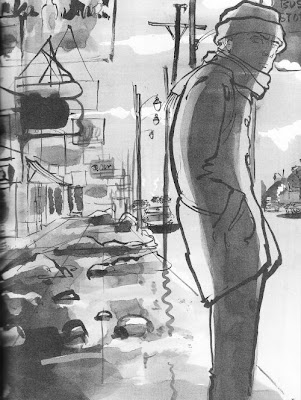 It's a fascinating contrast between Small's internal emotional state and the status-obsessed world around him, although it's hard to tell if this was the intent or not, since he never elaborates on it.
In the end, it's a dark, harrowing look at a painful childhood, but a positive one. Small managed to escape the multi-generational cycle of anger, inhibition, self-centeredness, and abuse, using his art as a force for good for both himself and others. While his telling of the story isn't perfect, it's still a fascinating tale, and one that's worth reading in hopes of learning from the sins of the past. It would be nice if avoiding those mistakes was easy, but anything that can help do so is something worthwhile, if you ask me.
Posted by Unknown at 12:00 PM