Footnotes in Gaza: This might be beyond my capabilities

Footnotes in Gaza
By Joe Sacco 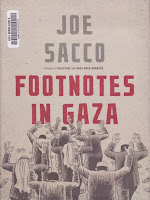 How does one even begin to approach the Israel/Palestine conflict, a notoriously complex situation that has been tangled with emotion and soaked in violence for more than 50 years?  With this book, Joe Sacco, who has established himself as the foremost journalist working in the comics form over the past two decades, takes the micro approach, choosing to examine two events that have nearly been forgotten by history, but were as traumatic to those who experienced them as any of the bursts of death and bloodshed that have struck the region.  During the Suez Crisis of 1956, Israel invaded the Gaza Strip, and in the cities of Khan Younis and Rafah, Israeli soldiers carried out a massacre of hundreds of Palestinian men who were of fighting age, with the former city seeing a chaotic gunning down of men in the streets and the latter a more planned affair in which men were gathered into a schoolyard and made to wait for hours before suspected militants were separated out to be killed or imprisoned. Laying out the specifics of these events is a narrow enough focus, and trying to work out exactly what happened from the various conflicting accounts must have been a headache.  You wouldn't be able to tell from Sacco's approach, though; aside from some material that sets up the geography and historical background of the Gaza Strip, he focuses almost completely on the personal accounts of the Palestinians who survived the ordeal, although he does regularly jump back to the present to show his own experiences as he tracked down the information.  It makes for an excellent look at the subject, making sure that the lesser-known tragedies of history have not been forgotten, but also relating them to the present day.  It might not be a perfect, all-encompassing summation of decades upon decades of history, but it's enough to give readers a picture of the past and present (or near-past, since Sacco's research was done in 2003) of the area, and a sense of how vast and eventful that history has been, even when focused on such a tiny piece of land.

In fact, the 400 pages of material that Sacco has put together here are all but overwhelming in the way they pile moments of violence and agony on top of each other.  Trying to get a handle on everything included herein is a difficult task in itself; perhaps the best way to do so is to emulate Sacco, discovering and highlighting the smaller details of his work to see how effectively he is able to paint a picture of the land and the people living there, both in the past and the present.

To start with, the detail Sacco brings to his scenes is fascinating, specific in the way every bit of dirt and rubble is noticeable, but just cartoony enough to make the people relatable, like someone the reader might know personally.  He works from photo reference, but it's not obvious, and the people fit right into their environments as fully-dimensional figures, whether in the past: 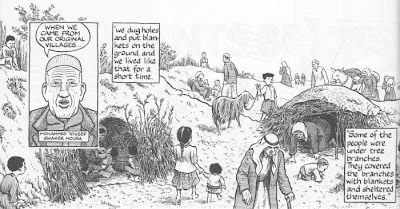 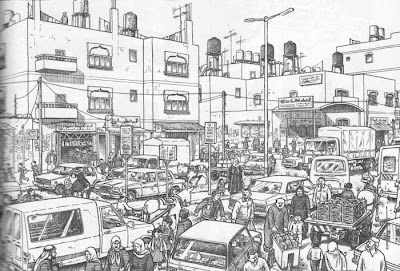 Sacco never lets you forget that this is real, however, whether by placing quotation marks around the captioned descriptions of his subjects, or by depicting them as talking heads, speaking directly to the reader, with their name included to remind us of their reality.  He also places himself right in the panels along with them, showing us that he was there and adding another reminder that he's not just copying images off the TV. It's intimate, and it's a beautiful portrait of humanity persisting, even in the worst and most disheartening of conditions.

And when it comes time to depict the awful events, Sacco can give it the air of utter chaos, as when Israel made their initial attack: 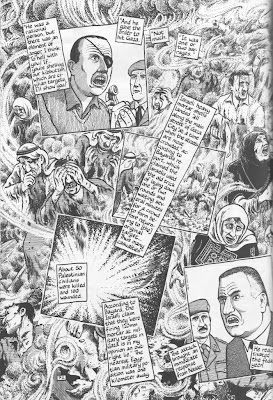 Or an unflinching, placement of death and violence right in front of our eyes, without being gratuitous but still making sure we know exactly what happened: 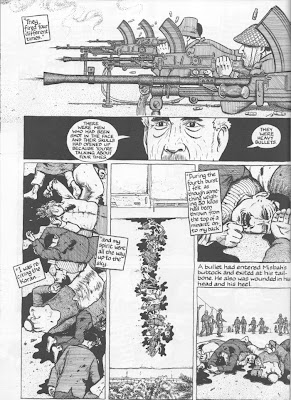 As matter-of-fact and striking as those scenes may be, the depictions of people's emotional reactions linger in the memory even more.  Sacco hits us hard when he shows the terror the people felt:

The humiliation they were subjected to: 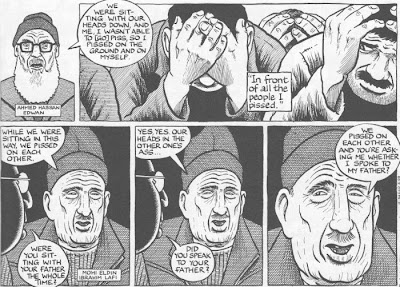 The anguish of watching loved ones die: 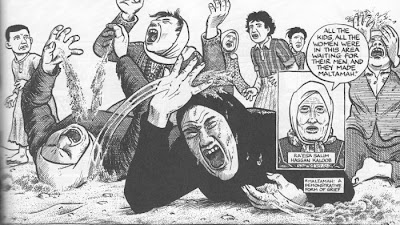 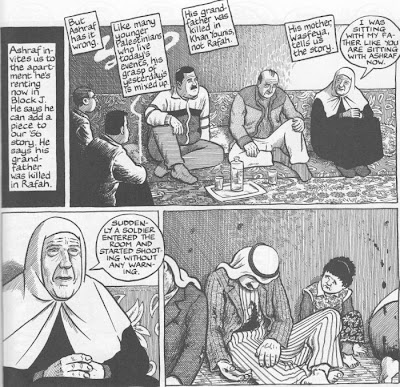 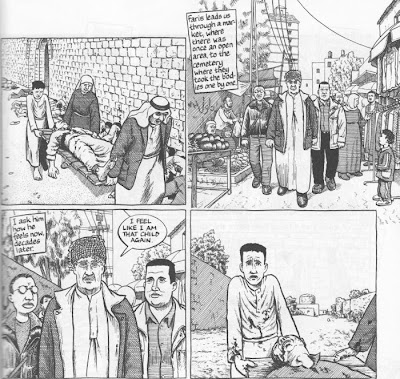 And the ever-persisting sadness of being powerless to even care for your loved ones' bodies after they have been slaughtered:

In fact, the present-day emotional reactions to the continuing situation are just as key as those from the past.  Seeing that the cycle of hatred and death is still going on is heartbreaking, whether it's in the grim sadness of funeral-goers for a killed child: 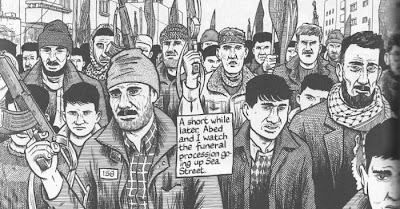 The frustration of a man who wants to protect his house from being demolished by Israeli bulldozers: 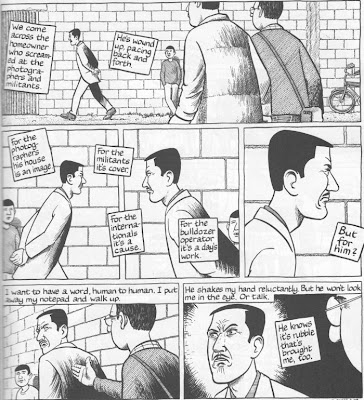 The anger of another man who sees his children being threatened: 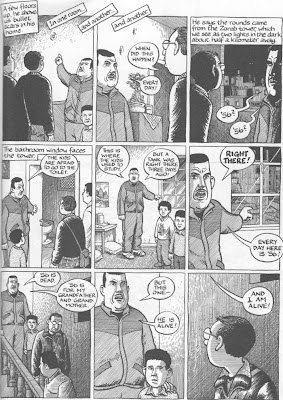 Or the misery of an old woman whose home was destroyed and has nowhere to go: 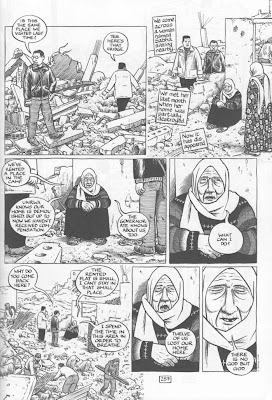 As sad and ugly as everything depicted here is, that fact, that the Palestinian people are still suffering and in constant fear, is the real tragedy of the story.  Early on, Sacco transcribes a surprisingly empathetic speech by Moshe Dayan, who was one of Israel's military leaders in 1956, as he attempted to describe the hatred the Palestians held toward his people.  In a striking line, Dayan says, "For eight years now, they have sat in the refugee camps of Gaza, and have watched how, before their very eyes, we have turned their lands and villages, where they and their forefathers previously dwelled, into our home."  Now add another fifty years onto that, and we can see how the tragedy has compounded, with decades passing and generations being raised while the violence continues.  It's a terrible story, and the fact that we're seeing only a small, nearly forgotten sliver of it multiplies its awfulness into incomprehensibility.

Sacco has created an important work here, one which strikes directly to the heart and refuses to let the reader forget the continuing situation.  And there's so much more within than the basics covered here; Sacco's struggles with the emotional distance that accumulates as his research turns people's experiences into mere facts and figures and the relationships he builds with people as he travels around Gaza and gets caught up in their lives are two more interesting aspects of the work among many others that are there to be found.  It's a rich, complex book, full of insights, recollections, experiences, encounters, and reactions, and it's something that will definitely stand the test of time as a major work of comics literature.
Posted by Unknown at 9:25 PM