The Squirrel Machine: It should be the girl machine, due to all the ladyparts

Elsewhere: I did what was probably an overly laudatory review of Avengers Vs. Atlas #1 over at Comics Bulletin, and nitpicked last week's Dollhouse at The Factual Opinion.

Link: I liked this look at all of Takehiko Inoue's covers to the collected volumes of Vagabond.  That's some nice art there.

And, if you're curious, I decided to forego the weekly preview thing, since I didn't feel like talking about whatever was on there.  I've been strapped for time lately, so we'll see if I keep it up or give it up entirely.  Sorry, any fans of my oft-tiresome blathering.  You'll have to settle for Jog, I guess.  Or Caleb.  Or somebody else, I'm sure.

The Squirrel Machine
By Hans Rickheit

Some comics (along with works in other mediums, of course) are near-impossible to describe, or even understand, really.  Or maybe that's just an easy way out: "I don't get it, so I'll just say it's too weird to understand!"  Hans Rickheit's The Squirrel Machine seems to lean in that direction, but as strange as it is, it's interesting and seemingly substantial enough to make examination worthwhile, even if a final summation will probably come up lacking.  The story, such as it is, involves two brothers who pursue weird experiments with technology and organic objects, mostly animal corpses, although to what end, or even what result, is mostly left up to readers to discern.  One could accuse it of being willfully obscure and an excuse to present an array of grotesquerie without much in the way of explanation, but there's more to it than that, and while a final answer is difficult to discern, it's a book that compels re-reading and attempts at interpretation.

One thing Rickheit does here to make the work so compelling is to present everything in a realistic style, full of minute, exhaustive detail: 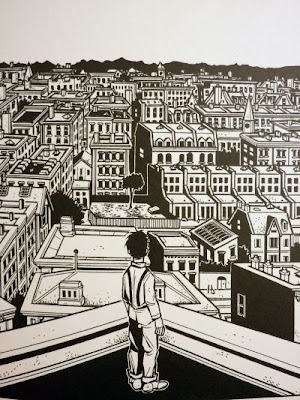 His settings seem fully realized, packed with grittiness and dirt, decay and collapse. The people move through it believably, fitting into what seems like a normal Victorian-era town on first glance, until more and more strange imagery is floated before our eyes and we get creeped out at the entire thing.  The two brothers, Edmund and William, don't present very good reader-identification figures, mostly approaching their world inexpressively, committing weird acts without much of a show of emotion at all.  But that in itself is a bit of a damper for all the weirdness; if they go about their actions without any indication that it is extraordinary, then one almost thinks of it as normal, to some extent.  But their creations are so inhumanly inexplicable, with intricate machinery (clockwork gears, pipes, tubes, tanks, light bulbs, and so on) connecting to bloated carcasses, aquariums full of dead things, or cages enclosing skeletal fauna.  And their laboratories themselves become increasingly impossible, cavernous rooms and tunnels whose walls are bursting with arcane mechanisms that stretch below their house that seem to connect to exits all over the town: 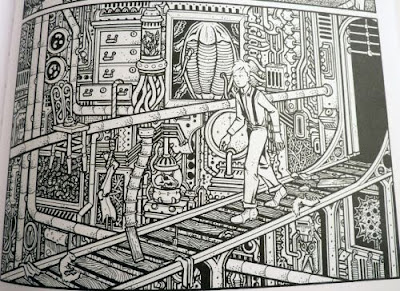 There's also a semi-feral young woman who raises pigs, a town populace increasingly hostile to the boys' creations, a mother who disapproves of their actions but can't seem to bring herself to do anything about it, and another young woman who takes up with Edmund without much of a reason outside of animalistic attraction.  And that's not even getting into the odd visions that periodically appear, the young girl who haunts the caverns, the rampant vaginal imagery, and the strange creatures that present themselves: 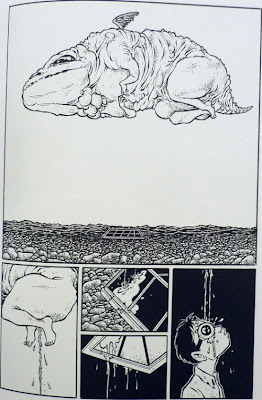 One could come up with any number of explanations for the imagery here, from the encroachment of technology on the 20th century and the perversions of nature that followed, to the awakening of sexuality in the adolescent and the fascination with organic processes like reproduction, birth, and death that can dwell in the mind.  Or maybe it's all a trip into Rickheit's subconscious, a slaved-over jaunt through the nightmares that haunt his waking mind.  Whatever the case, it's a compelling, fascinating journey through an often creepy and always striking world, one that's regularly quite hilarious, as when Edmund, having a sexual tryst with a young woman who willfully accompanied him back to his mad scientist's lair, turns a spigot to release hundreds of snails upon their contorting, commingling bodies.  What can one make of that sort of thing?  You might be able to attempt an interpretation, one that will be just as valid as any, but it's just as legitimate to go along for the ride and see where Rickheit takes you.  It won't be where you expect, that's for sure.
Posted by Unknown at 9:41 PM