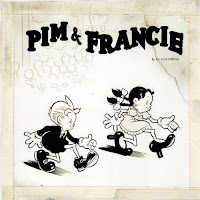 What the hell is going on here?  What is this book, anyway?  As presented, with nothing in the way of explanation (there's only a table of contents, or rather a list of "stories" without any page numbers, and the title page doesn't show up until 24 pages into the book), it's like the inexplicable artifact of a deranged mind, seeming to be the remnants of a destroyed sketchbook and half-finished art pages and animation cels, pieced together with tape, pencil marks and correction fluid often still visible.  Much of the content is just imagery, with the occasional series of pictures containing some sort of narrative, but mostly just presenting one disturbing scene after another.  And that's pretty much the entire book, just a non-stop barrage of weird, creepy, strange things happening to the titular pair of cartoony children. 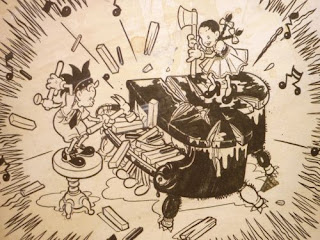 If you delve into Al Columbia's career, you'll find that he's done stories featuring these characters in various places, so some of the content here could be from those stories, or it could all be previously unseen material.  Taken on its own though, it's not completely satisfying; the barrage of weirdness is interesting, but there's little in the way of connective tissue.  It does, however, do a great job of presenting a disturbing mood of dread and decay, seeing the cute little waifs stumble into one horrifying situation after another, often dying gruesomely only to show up again a few pages later to repeat the process.  Columbia has a flair for the grotesque, which, when mixed with such cute cartooniness reminiscent of old-school Disney, makes for an especially creepy juxtaposition. 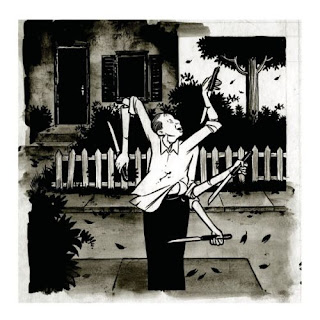 One can only imagine the actual stories surrounding the glimpses we see here: a multi-limbed man wielding a bunch of knives chases the pair; a rotund, bald man named Cinnamon Jack whose tongue hangs lasciviously out of his mouth collects children's heads from a tree or butchers and cooks kids for dinner; Francie apparently births a horrible, bloody monster of a baby; the kids come across a killer who looks like a mixture of Disney's Goofy and Basil Wolverton's Lena Hyena; a forest of cheery anthropomorphic trees decays into a group of trunks bearing bloody eye sockets and screaming mouths; the pair's benevolent grandparents rise from the dead and join a horde of shambling zombies.  And much, much more, some of which seems to make sense and some of which is just incomprehensible, creepy imagery.  It's a cascade of horror, page after page of mostly-unfinished nastiness, enough to stick in the mind and cause nightmares for weeks. 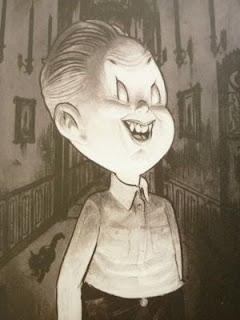 As an art book or collection of fragments from Columbia's career, it certainly shows what a good designer and cartoonist he is, and how effectively he can create disturbing imagery.  Those knobby-kneed, big-footed cartoons mix with the creepiness and gore well, suggesting a horrible perversion of innocence. The facial expressions are effective as well, with Pim and Francie often looking like inbred dimwits or aloof, disinterested spoiled brats, and the various antagonists bearing evil grins and mutilated, disjointed visages that are recognizable as "human" but altered enough to look wrong. 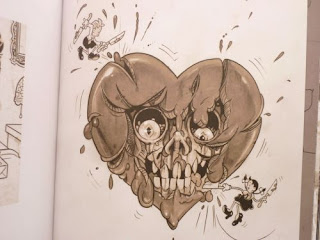 However, being devoid of any context, the book becomes little more than an accumulation of work, rather than a complete object.  Columbia has the artistic chops to craft some incredibly effective horror, but it loses some of that effectiveness when stripped of narrative.  Hopefully, he'll follow this up with something with an actual plot (or put together another collection of his previously-published stories), and we can see what he's really capable of.
Posted by Unknown at 11:54 AM