Athos in America: Jason in transition?

Athos in America
By Jason
Published by Fantagraphics 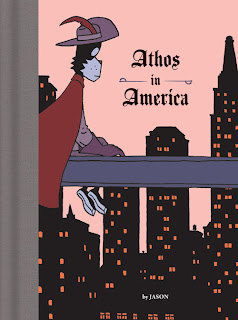 All six of the stories in this latest volume from Europe's eminent purveyor of deadpan, blank-eyed, funny animals are quite good, but two of them especially seem to stand out for me. The first (or last, according to how the book is ordered) is the title story, which sees the return of the main character from The Last Musketeer as he tells his story to a New York bartender, recounting his travels across our great country. It's one of those sort of romanticized portrayals of the United States that you occasionally see from Europe or England, a celebration of the openness of the land and the possibilities available here, while still acknowledging that it's not paradise, and the cruelty of life still reigns supreme. I love the gentlemanly tone of Athos' conversation with the bartender, and with a closing montage of the sights and sounds of America, it's a nicely subdued ending to the book, whose previous stories featured plenty of violence and stormy emotions. 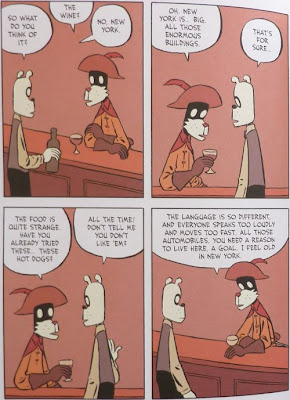 Of those stories, the one that really struck me as something interesting and different from Jason is "A Cat from Heaven", which I hope isn't autobiographical, even though it seems to be. In it, Jason portrays himself as an awful jerk, giving his girlfriend/wife a black eye during an argument, threatening to kill her, acting like a dick to his friends and fans, and just generally being an asshole. It's startlingly stark and emotional, making for a weird disconnect, since it's portrayed exactly the same as in all of Jason's other comics, populated with his minimalist animal characters. But just by giving the character his own name, it becomes raw and personal, like something out of an Adrian Tomine or Ivan Brunetti comic, the artist's soul being laid bare on the page. Maybe it's all an exercise, an attempt to add something a bit darker to his usual style, or maybe it's an anguished confession, but whatever the case, it proves that Jason isn't sitting on his laurels and cranking out repetitively quirky stories in his usual style; he's pushing himself to do new things and communicate through his art, and it's wonderful to watch. 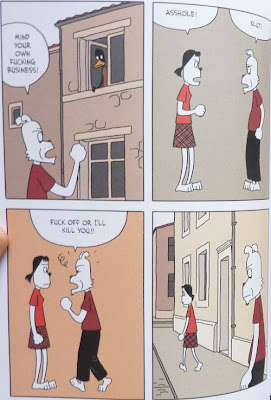