Sometimes I don't get comics (which isn't necessarily a bad thing)

Things You Carry
By Vincent Stall
Published by 2D Cloud 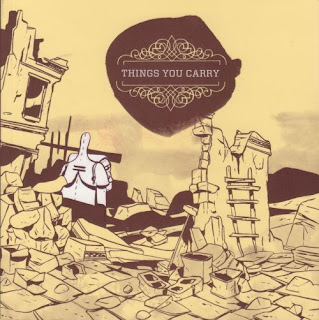 I'm not sure what's going on in this comic, but that doesn't matter, because it's a really cool looking, and it's interesting to try to tease out what plot there is amongst the cool visuals. Sometimes that's all you need: a nicely-illustrated journey through an artist's mind that might or might not be symbolic, if you want to try to wrap it in some sort of interpretation, or just enjoy it for what it is.

From what I can tell, the wordless story follows a character wandering through a garbage-strewn apocalyptic wasteland. He appears human, but he might be something else entirely, with the clothes covering him from head to toe (including a blank, eyeless hood covering his head) hiding whatever is underneath. He doesn't seem to have much purpose, just rummaging around in the rubble, at one point watching a procession of similarly-attired characters playing weird instruments, and then encountering an odd spacesuit-wearing figure in a cave who sends him on some sort of mystical journey (maybe? I'm really not sure what happens). It's weird stuff, but it's pretty gorgeously drawn, with chunky ink lines marking out all the jumbled details of wrecked buildings, clouds that seem to be alive billowing through the scenery, stacks of oddly orderly piles of papers, and what might be an even more apocalyptic ending. This is weird shit, but I dig it. Maybe someday somebody can explain it to me, but I'll be enjoying the mental imagery it provides whether that ever happens or not.
----- 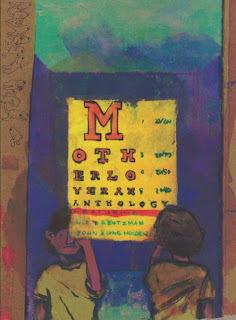 I'm not as keen on this short anthology, but I respect it for what it is. It's divided up into three stories, two by Nicholas Breutzman and one by John & Luke Holden. Breutzman's pages feature some nice, clean illustration, first with a story about a young man having a tryst with a girl and recalling a photo of his grandfather that he found that fascinated him since it looked so much like himself. There seems to be a theme of photography and the way some images really seem to capture a person's likeness while others don't really make much impact. In Breutzman's other story, he tells what might be an autobiographical tale of moving from New York back home to Minnesota, then hanging out with a friend after he arrives. They drink some beer, reminisce about childhood, and wander around a housing development, and that's about it. It's sort of an illustration of the aimlessness of a certain point in one's young adult life, I guess. 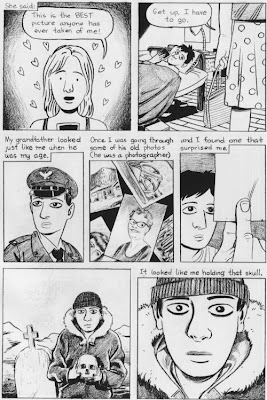 More interesting, even if it's not my preferred sort of style, is the Holden brothers' strange, ugly story about a kid hanging out with his friend and trying to get his hands on some pornography. There's a purposeful grotesquerie on display here, a kind of disparaging look at characters who could be described as "white trash", from the friend's mom who is depicted with a hideous, monstrous face and terrifyingly bra-less breasts swinging disturbingly under her shirt, to the narrator, who implores his friend to let him search his family's garage for porn because he "need[s] to see a pussy tonight." I'm not sure if this is meant to be a realistic (perhaps semi-autobiographical?) depiction of lower-class life, or if it's supposed to be an outrageous imagining of the way some people live. Whatever the case, it's pretty disturbing, ugly characters rolling randomly through a world devoid of any positivity toward a seemingly pointless future. The presentation adds to this feeling, with panel-less drawings hanging on the page accompanied by narration set down in childlike handwriting, the wavering lines giving everything a rough, sketchy quality and the colors (by Raighne Hogan), which consist of sickly greens and muddy purples, smeared onto the page for maximum grossness. It's a complete, consistent vision, but not a very pleasant one. 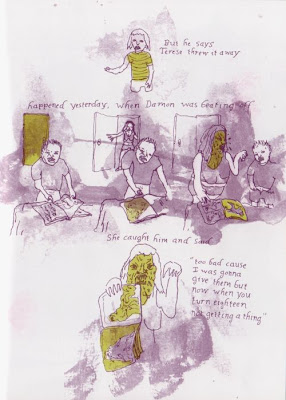 As a small, independently published anthology, this is a good example of these creators' work, and while it's not necessarily something I would seek out, I'm glad I read it, just to get a feel for what kind of comics they make. I'll definitely be interested in checking out their stuff in the future.
Posted by Unknown at 7:00 PM