Just when I think of giving up on this "project", this issue gives me some good Groo stuff. I expected more of the occasional appearances of the character hiding in the corners of the panels, like this one that opens the issue: 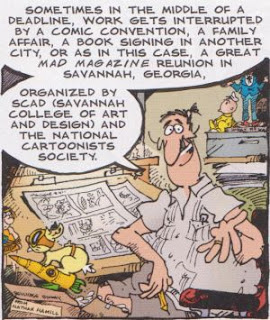 But a later story, whose punchline reveals that Sergio's work is being done by elves (or at least a Pacific-islander variant), gives a pretty great look at not just Groo, but everything that he does (oh yeah, spoilers, I guess?): 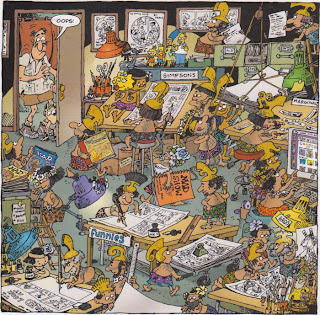 I love the detail in that panel/splash, not just of all the stuff Sergio is constantly working on (Groo, A MAD look at..., MAD marginals, Simpsons comics, this very comic, etc.), but the amount of work he puts into it, all measuring and ruling, researching, consulting model sheets, keeping track of everything. Even as a joke, it's a pretty great look into what he does.

Finally, there's a bonus appearance by Groo, although it isn't drawn by Sergio. Instead, it's on the letter page, a picture from the sidewalk outside what I assume is Halifax's Strange Adventures: 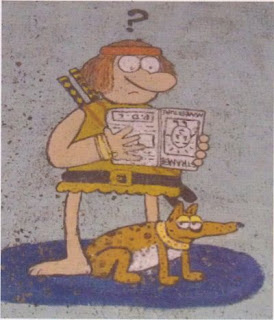