Fables: I Think I See Where This Is Going 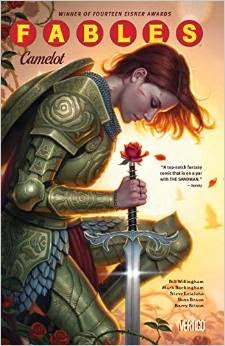 Over the past year, I took something of a hiatus from blogging, but I didn't remain completely silent. I guess I can't let my thoughts go unrecorded, so I regularly posted little "here's what I thought" blurbs on Goodreads about most of the books I read, including the last few volumes of Fables, a series that I used to like quite a bit but felt had been kind of floundering for the past couple years. I was especially down on the 19th volume, so I'll go ahead and repost what I wrote about it here (and if you want to see what I thought was a dumb comment and my somewhat-obnoxious reply, go check it out):


I think this volume confirms that I'm ready to stop buying this series (which means I'll still read it, of course, just to find out what happens to the various characters). It's just not really doing it for me, even though its events should be intriguing. There's just something about the nature of the threats that the characters face that seem kind of contrived, as if Bill Willingham is casting about for new stuff to cause them problems, but then also wrapping them up too quickly. Snow White having a secret "husband" that predated Prince Charming and Bigby Wolf should be a big deal, but we learn so little about the guy (except that he's a sexist jerk, so we can boo and hiss at him), how he got his magical powers, and what exactly he wants (to rape Snow, apparently; did I mention the booing and hissing?), that he seems more like a device to get the characters where Willingham wants them to be by the end of the volume. The early years of the series were characterized by a massive threat hanging over the characters, one that we only slowly learned about, so when the big confrontations came, they seemed epic. And even after that was over, other events took time to play out, rather than appearing, being confronted, and ending before we fully understand what is going on. At this point, Willingham seems like he's casting about for something to do with the world he's created, which doesn't bode well for its continued existence (which isn't lasting that much longer anyway, but this sort of thing makes me think that, like happens so often with long-running TV series, it's limping to a close rather than reaching anything resembling a planned conclusion).

Well, as of the next volume, I can see that there does seem to be a plan for the series' end, and an interesting one at that, but I'm not ready for a complete mea culpa; I still think that volume is pretty clunky, abruptly introducing a powerful threat, shuffling a major character off to the edges of the story until he can show up at the end for a big battle, and then killing him off in a way that all but guarantees a later return.

This next volume, however, makes some of that story make sense, at least as an awkward way of hammering the series into shape for the final few volumes. It's obvious in retrospect that it was meant to accomplish two things: remove Bigby Wolf from the series for the time being, and introduce something to drive a wedge between Snow White and Rose Red. It seems that Willingham has a big finale in mind for the series, but had to get some pieces into place in order to kick it off, and rather than spend a while building to it organically, he found a way to unceremoniously shove the characters into the spots he needed them.

So, it was kind of an ugly way of getting to this 20th volume, but now that we're here, I like where it's going. Rose Red has decided to take her place as an agent of the avatar of Hope, specifically as the Paladin of Second Chances. In order to do so, she decides to reestablish Camelot, recruiting knights in need of redemption who can go on quests for the betterment of Fables everywhere. But what she doesn't realize (or thinks she can control) is that establishing this paradigm will repeat the full story of Camelot, including its horrible fall.

That's pretty interesting stuff, especially seeing how the different characters fall into different roles (Rose as King Arthur, Morgan Le Fey as Merlin, and even Lancelot as Guinevere). But what I find especially intriguing is that Snow White is being set up as the new Morgan Le Fey, due to Rose's decision to give the evil Prince Brandish a chance at redemption. That's a really interesting conflict, and Willingham sells it pretty well, giving Snow a sort of villain speech in which she describes how cold and hard she can be when defending herself from threats. I'm really curious to see how this plays out over what I believe are the remaining two volumes of the series.

There's also a single-issue interlude that's one of the best stories the series has done in a long time, in which Bigby meets Boy Blue in the afterlife, and they discuss the new perspective that being dead brings, as well as contemplate the meaning of life and the afterlife. It's an interesting look at some of the grander themes of the series, and even gives a touch of humanity to the crazy, mystical world of the series, providing a nice bit of character exploration and ending on one of the more poignant scenes of the entire series. Bigby is certain to come back to life before the series is over, but this would work well as a last hurrah, even though we know it won't be.

The volume isn't all wine and roses; there are a few one- or two-issue stories that look at some of the series' minor characters that aren't very good (the Geppetto story is interesting, indicating that he's going to become a threat again, but I can't imagine he'll play into the finale too much, considering how the series has moved past him), and some moments are kind of distasteful, such as Dr. Swineheart's sexual advances toward the now-beautiful former Nurse Spratt. But overall, this installment is a definite improvement, and one that makes me hopeful for the upcoming end of the series. For now, at least, it looks like this is going to come to a satisfying conclusion rather than an indecisive close. We'll see if Willingham can stick the landing, but even though it's not going to be as good as the series' glory days (I would mark volumes such as March of the Wooden Soldiers and The Good Prince as high points), it looks like it's going to be better than I had been expected for the last few volumes. That's a pleasant surprise.
Posted by Unknown at 8:53 PM