Hopefully this will be something of a semi-regular feature around here... 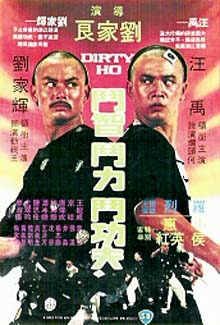 Well, this is the goofiest, yet most enjoyable, martial arts movie I've seen in a while. It's pretty nuts, starting out as what seems to be a rivalry between businessmen/jewel thieves and building, in that hard-to-follow way that old-school kung-fu movies often do, into a complex plot that has to do with the succession of the Chinese Emperor's heirs. Of the two rivals, the younger, Ho, gives the movie its name, since he's uncouth and uncultured compared to his counterpart, Wang, who likes to surround himself with art, music, and fine wines. The plot sees Wang, who is played by the great Gordon Liu, take Ho under his wing as he battles assassins for reasons that eventually become clear, and the two of them face off against ever-more-dangerous opponents on their way to the expected climactic fight.

What makes all this especially amusing is that Wang wants to keep his kung-fu skills secret, so for most of the movie, any fights he has are done surreptitiously, with him and his opponents kicking each other under the table while everyone else in the room is unaware or trading quick blows while people have their heads turned. This makes for some especially bizarre fight scenes, such as a bit in which Wang is sampling some nobleman's wine, but the nobleman and his servant keep attacking him in between pours and sips. It's hard to explain, and I wasn't even sure what was going on at first, but as the scene progressed, I became more and more delighted at the sheer oddness of a wine-tasting battle.

In another great bit, Ho breaks into Wang's house and attacks him, and Wang passes off a female musician as his bodyguard, then when Ho tries to fight her, he stands behind her, pushing her hands and feet to make her punch and kick him and making for a hilarious scene as she beats him up without understanding what is going on:

The move is definitely a comedy, full of goofy facial expressions and noises, and some of the silliness that would show up in kung-fu movies of the period. There's a fight with some beggars who are all pretending to be cripple, although it doesn't seem to give them much of an advantage, and an unfortunate bit in which a gang of effeminate men attack Ho and make him question his sexuality. But overall it's a lot of fun, with Liu especially seeming like he's having a great time acting completely oblivious while he fends off attackers without letting on that he knows what's going on.

The fights are impeccably choreographed, all leading up to a climactic scene in which Wang and Ho, sharing a long staff, face off against three foes, one of whom uses one of those spears with a big, sword-like blade on the end and another using what appears to be some sort of weighted chisel, and the whole thing is like an intricate dance, with each side switching weapons and positions, moving around each other and striking each other in close quarters. It's crazy and awesome, everything I would hope for in a Gordon Liu fight.

Occasional dumb jokes aside, this one is something special, one of the most unique and strange examples of the ways that kung-fu movies of the 70s would go to weird places and stretch themselves into nonsensical plots just to get in some good fights. You always hope for something like this when you watch one of the older martial arts movies, and this time that expectation paid off.

If this sounds like your idea of a good time, you can watch the whole movie on YouTube. I don't know if this is only temporarily available, since I don't know how much attention the rights holders to old kung-fu movies pay to YouTube, so just in case it gets taken down someday, here's the fight I took the gif above from, and here's the final battle. Enjoy!
Posted by Unknown at 2:00 PM