One Piece is Still Awesome as of September 2014

I've continued reading One Piece as it came out in digest form since the last time I wrote about it, but even aside from my near-complete lack of blogging since then, I haven't found much to write about. It's been enjoyable enough, but the story that lasted from that volume (67) all the way up through volume 71 got kind of draggy, acting mostly as setup for the next portion of the plot, which is finally kicking into gear as of the current volume, #72. But with all the craziness and stuff that's going on, I'm back on board, at least for now (we'll see how I feel in a few months, when the next volume comes out).

Want some examples of the stuff that's got me excited again? I would start with the plot, but as usual, it's way too complicated to explain in a way that makes much sense; it basically involves the Straw Hat Pirates infiltrating the kingdom of their current enemy, Don Quixote Doflamingo. They're supposed to do a prisoner swap with him while secretly planning to destroy a factory he's using to manufacture artificial devil fruits (the things that give people the crazy superpowers that almost everybody in the series has). Things immediately get sidetracked when Luffy gets distracted by a fighting tournament, in which the prize for the winner is the Flame-Flame fruit. This was the fruit that gave Luffy's brother Ace his powers, but now that he's dead, somebody else can claim it (that's apparently how things work in this world), and Luffy doesn't want anybody else (especially some vicious criminal) to have it. That gives the tournament some stakes, but that doesn't matter all that much (for now); you never need much of an excuse to throw a fighting tournament into a shonen manga series.

The previous volume featured some of the preliminary rounds of the tournament, but the bulk of this installment is dedicated to the round that Luffy participates in, and it's as awesome as one would hope. As with any big fight scene, Oda takes this chance to throw in a bunch of crazy characters, like this martial artist whose badassery is somewhat tempered by the frilly ruffed collar he wears: 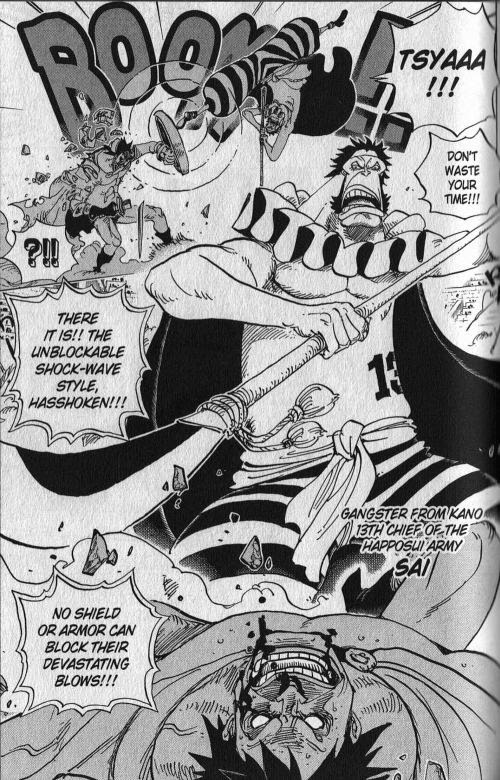 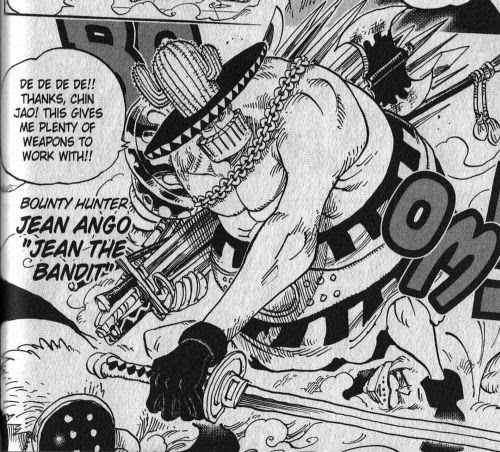 Or these brothers, one of whom has the bizarre power to be worn as a jacket: 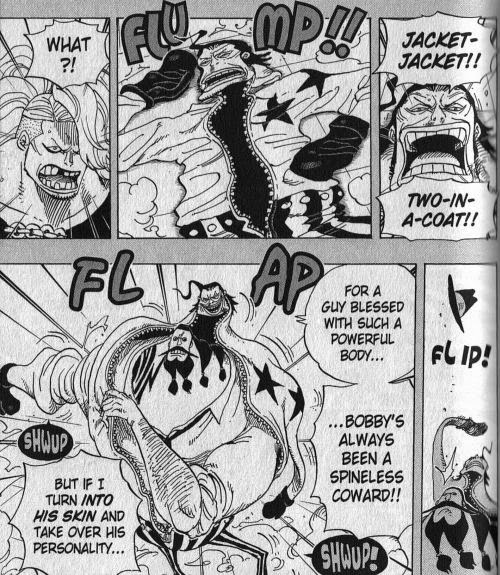 But while that's funny, we still get some awe-inspiring, grin-inducing action, like this moment in which Luffy comes up against a giant who had been wiping the floor with everybody: 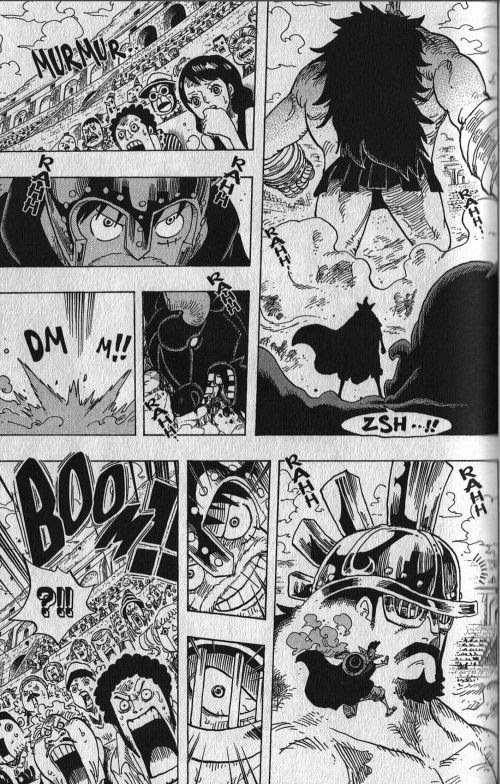 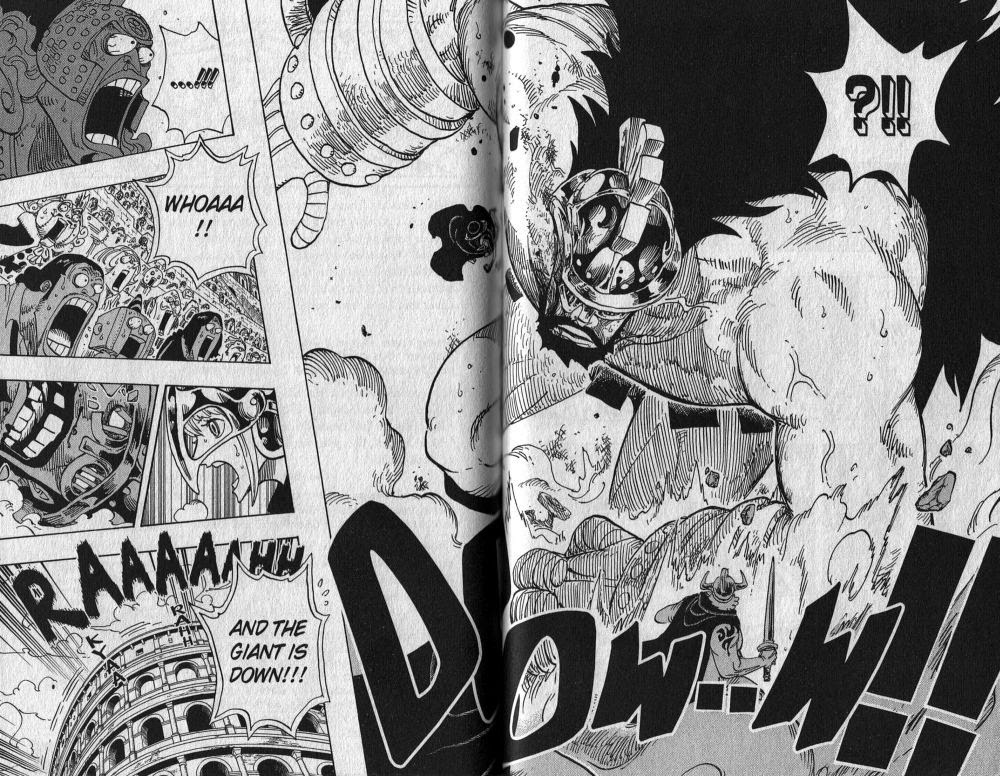 I love the reaction shots that Oda mixes in to the action there, especially the one at the end of the first page. We see Luffy winding up for a massive punch, but it actually happens off-panel, and we just see the crowd freaking out about it, before turning the page and seeing its immediate effects (and a further freak-out as the shock of what just happened continues to register).

Later, the battle comes down to Luffy and another powerful foe, and you can tell it's going to be awesome as soon as they throw their first punches: 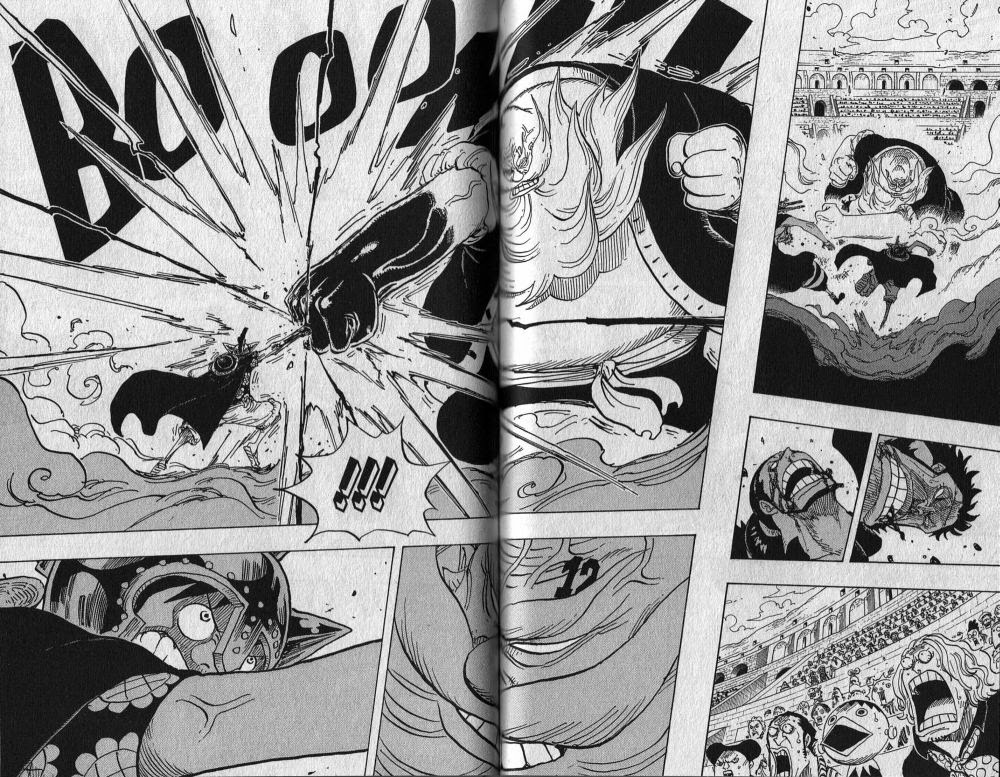 Their fight gets a bit of emotional stakes due to the revelation that he was a pirate whose life was ruined by Luffy's grandfather Garp (you see, he had hidden his pirate treasure beneath a glacier that only he could break open, due to his diamond pointed head, but Garp punched him on the head so hard, it wasn't pointy anymore), so he swore revenge on Garp's family. I won't spoil the resolution to the battle, but it's awesome and hilarious, and as the other competitors get fleshed out and their motivations come into focus and begin to tie into the rest of what's going on in the kingdom, I expect it's going to lead to some pretty amazing places.

But that's not all that's going on in this volume. There's also a bit in which Sanji starts to form a relationship with a lady who is working for the kingdom's organized crime family, and she has one of those powers that Oda occasionally uses that is based on the silly things that kids do (see also: CP9's finger pistols): 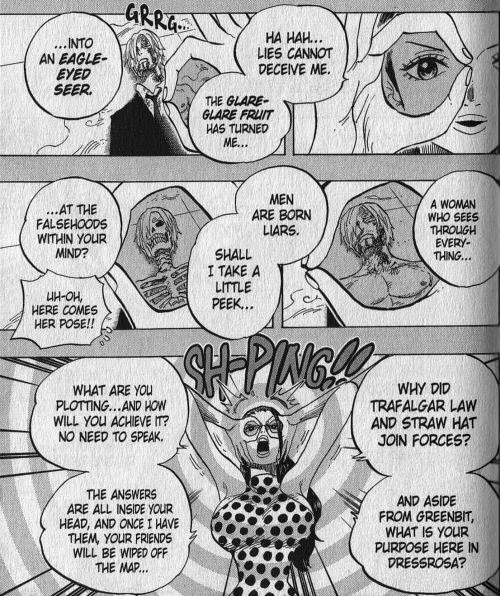 And she also has a pretty good kick-to-the-face move: 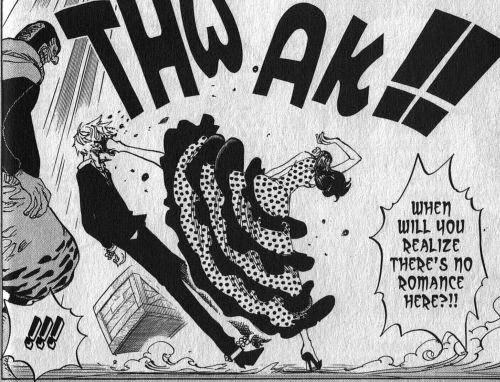 I also liked a scene in which Trafalgar Law, the Straw Hats' ally, is facing off against Joker/Doflamingo and a Navy General, when the latter apparently uses a power to call down a meteor strike: 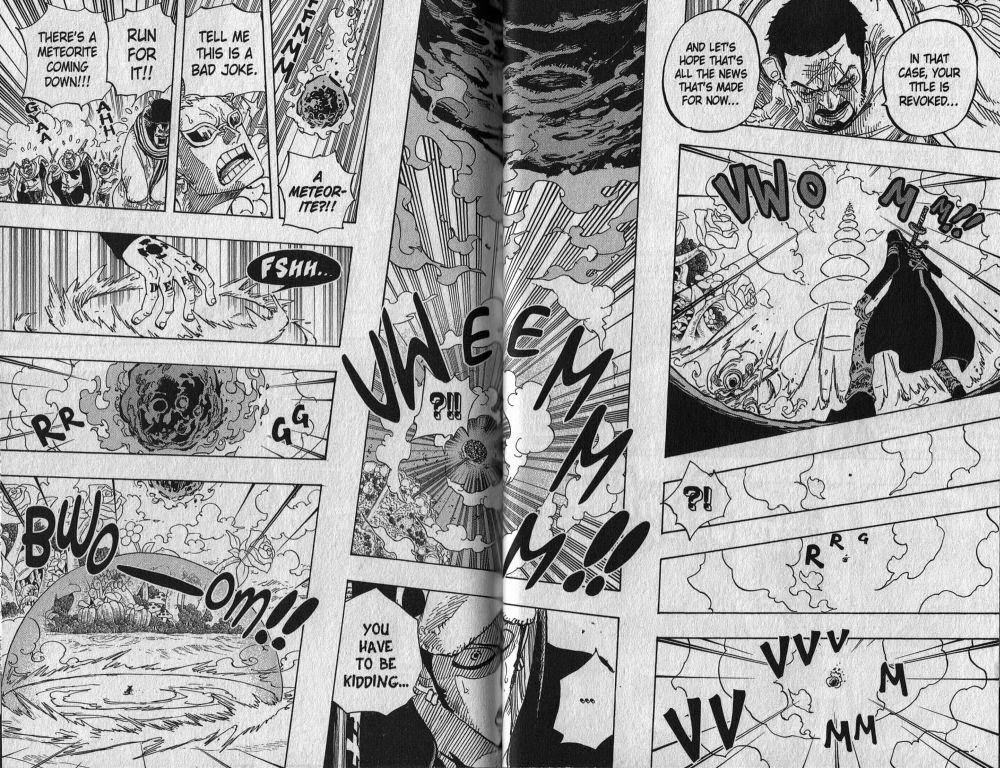 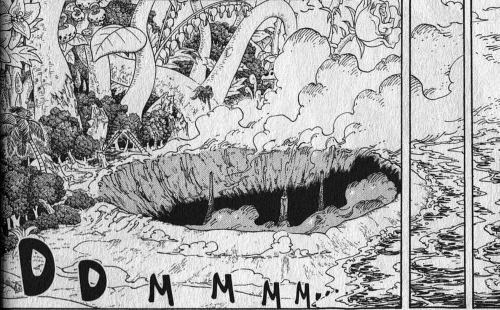 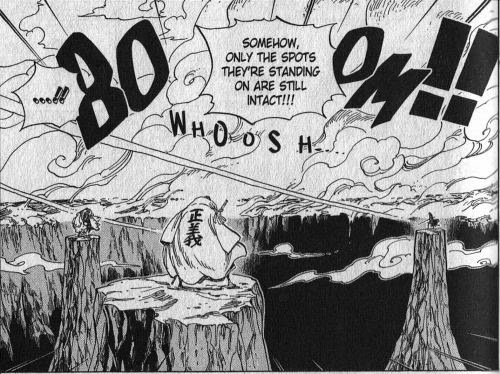 It's only a short scene, but it's a hint at an epic battle to come, demonstrating the immense powers that our heroes will have to face at some point. I can't wait to see how Oda deals with it, whether it's Luffy, Zolo, or any (or all) of the other characters that will have to come up with some way to battle literally world-shaking forces.

On a lighter note, there's a running subplot in which Nami, Brook, and Chopper get attacked by a lady who has the power to turn people and things into "art", which means they get transformed into the following forms: 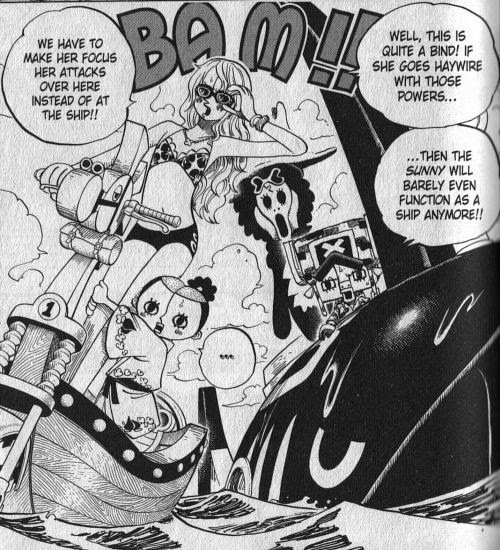 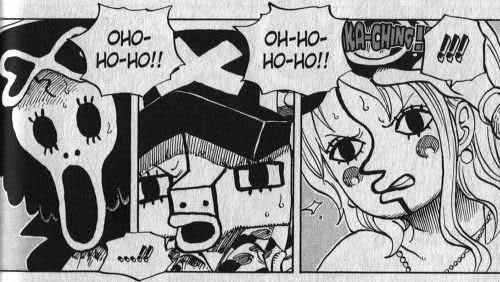 That's really weird, but I like the references to Munch and Picasso. This lady also lets Oda break out one of his classic gags, in which an ugly woman insists she is beautiful in a non-sequitur manner:

And I didn't even mention the other running subplots, in which there are some tiny people living underground in the kingdom planning on launching a rebellion, or that half of the country's population is living toys. The latter looks to be leading up to a classic emotional reveal, since there are hints that somebody with strange powers is turning people into toys, who then go on to secretly help out the families that think they are dead without revealing their true identities. That sounds silly, but if anybody can make it work, and even wring tears from it, it's Oda. I'm hoping he won't spend too many more volumes working it all out, but if the rest of this storyline is as enjoyable as this installment, I probably won't mind.
Posted by Unknown at 2:00 PM