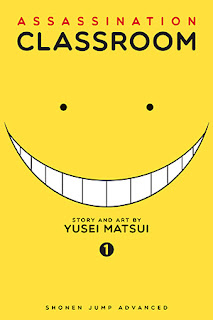 Well, this is certainly an odd manga, but one that's also pretty enjoyable. It sort of takes the form of an inspirational teacher-student story, but one with a skewed morality and a strange combination of hopefulness and menace. It's like a more sincere, less reference-laden Sayonara, Zetsubou-Sensei mixed with occasional action and tentacle imagery.

I suppose I should explain the premise: there's this alien who has destroyed most of the moon, and he plans to do the same to the earth in a year's time, but during that interval, he wants to be the teacher for the remedial class at a Japanese junior high school. Since he appears to be unkillable by the world's military forces, it's up to his students to assassinate him before the deadline is up, but in the meantime, he'll do his best to be a good teacher and connect with and inspire them. Yes, that's really weird, but it's a chance for lots of strange humor, as the kids try to enact gun- and knife-related violence (which is perfectly safe, since they use rubber knives and guns that shoot BBs which are deadly to him but harmless to humans) against a smiling creature that is continually taunting them and egging them on. 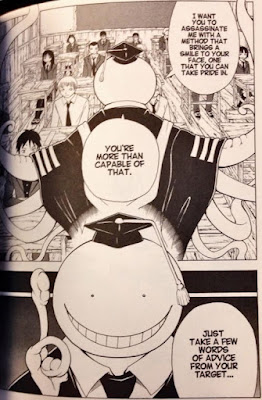 The cover of the volume (and future volumes) reflects the appearance of the teacher character (who is given the name Koro-Sensei, a play on a Japanese term meaning "hard to kill"): a grinning smiley face atop a mass of tentacles, usually clothed in a goofy mortarboard-cap-and-gown outfit. He's a bit of an enigma (we do get a vague hint at an origin that will probably be explored later), with no real motive for wanting to destroy the planet or inspire a bunch of schoolchildren, but as this first volume progresses, we actually get to know him a bit, seeing how he reacts to the kids as they attempt to kill him. While he easily escapes every assassination attempt (we're repeatedly told that he can move at mach 20, which gives him the chance to do things like style someone's hair while they're trying to stab him), they do occasionally manage to surprise and fluster him, revealing a personality that conflicts with the happy-go-lucky exterior he usually presents, one that's kind of petty and childish.

Most interestingly, and in what is probably the best source of the comic's humor, he seems to be trying to make a real connection with his students. When a kid tries to kill him by throwing an exploding baseball at him, he offers pointers on how to be a better pitcher. When a girl who is a whiz at chemistry but little else tries to poison him (by politely asking him to drink the poisons she made), he teaches her about the value of writing skills and the importance of communication. And most amusingly, he makes a genuine connection with a troubled student who is excited to get the opportunity to kill a teacher, showing him that there are authority figures who care about him (and also want to blow up the planet).

But in addition to all these positive effects he has on people's lives, Kuro-Sensei also manages to occasionally shed his happy exterior and become genuinely menacing. An early assassination attempt in which the ostensible main character of the book, a boy who has an incredibly improbable hairdo (even for a manga character), is bullied into trying to kill him via suicide bombing, makes Kuro-Sensei angry, at which point he exploits a loophole in his promise not to hurt his students, telling them that he has no compunctions against killing their families, friends, and anyone else he feels like if they displease him. He also gives a glimpse of what might be his true face, which is pretty horrifying: 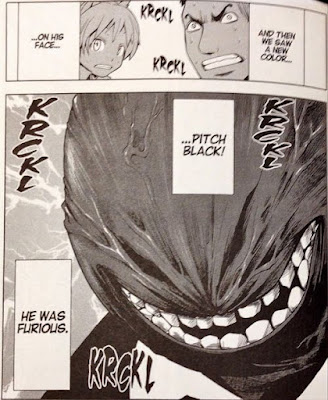 It's a canny choice on mangaka Yusei Matsui's part: there's plenty of silliness here, ranging from slapstick comedy and wordplay to wacky behavior and the cognitive dissonance of a teacher encouraging his students to murder him, but underlying it all is a sense of danger and a looming threat that will eventually have to be addressed. Manga series like this can often drift conceptually from where they start out, so I'm curious to see what happens in future volumes. Will we just get more stories about school-related inspiration and wacky attempted murders, or will plots develop in other directions? I'm definitely interested in finding out.
Posted by Unknown at 6:30 PM