Over the past several years that I've attended the Chicago Alternative Comics Expo (CAKE), I've made a point to stop by Kevin Czapiewski's table and pick up some comics by Liz Suburbia. He has plenty of other stuff that he distributes through Czap Books (including his new graphic novel Futchi Perf, which I'm eager to check out), but ever since he turned me on to Liz Suburbia, I can't get enough of her work, and since her comics take the form of small, photocopied minicomics, they usually only cost about one or two dollars a pop, which is a great value. Really, she should be much more widely recognized (which may be currently happening with the release of her new book Sacred Heart from Fantagraphics); she has a great eye for expressive characters, and one of the strongest cartooning styles out there.

But just what is it about her books that grabs me? It think it's that, among the many cheaply-printed minicomics I've read, hers may well be the best at quickly establishing interesting characters and situations in a way that immediately draws me in and gets me invested in whatever is happening to them, and the beautiful cartooning that does so much with simple black and white linework doesn't hurt either. 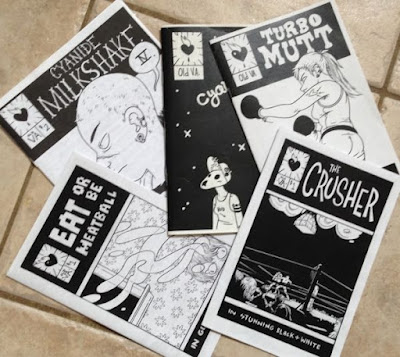 Some examples: in The Crusher, we get a simple, nearly wordless depiction of a boxing match and its aftermath, but the way Suburbia depicts it with alternating savagery and tenderness is beautiful. Turbo Mutt is a comic about sex in which all the intercourse is imagined (either through a bit of phone sex or just a fantasy about some strangers), but the way the acts are depicted as a jumble of body parts and orgasmic expressions splashed across the page communicates the universal appeal of sex and the strange way humans are affected by it. Eat or Be Meatball is a sort of sci-fi story in which some young people convicted of "an unspeakable crime" are sentenced to relive their lives, hoping to reconnect with each other at some point, which leads to a terrible sense of constant deja vu. It's a goofy/weird/cool idea, but one that also resonates with the human experience of isolation and the joy of finding someone to connect with.

Cyanide Milkshake is Suburbia's ongoing anthology series, and if the two issues I have (#4 and #6) are anything to go by, this is where she throws all her ideas at the wall, whether they be short comics about her dogs, fake ads for silly products, short autobiographical strips or illustrations, parts of a serial story about a couple surviving in a post-apocalyptic society, long, hand-lettered rants about punk philosophy, or whatever else she feels like doing. It's thrilling to see her work in this fashion, with funny observances, personal memories or observances, silly jokes, and fascinating stories all bumping up against each other and forming a beautiful, coherent whole.

I can't get enough of this stuff; just check out how well she conveys energy in something like this bit of feminist punk rock: 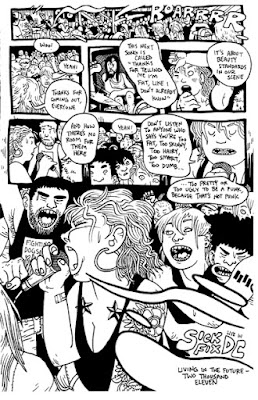 Or this bit of Jaime Hernandez-influenced musical enthusiasm: 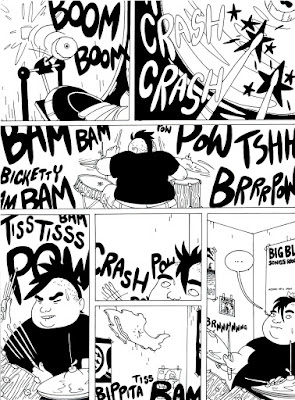 Or this example of her sense of humor: 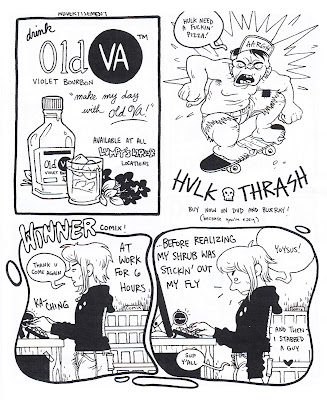 Her comics aren't all punk and attitude; there's plenty of room for quieter moments or jokes about human nature, but as cartoony as her figures are, they're true to life and expressive as hell. I think she's a talent that's incredibly underexposed, and I hope that her new book draws more attention to her incredible work. I, for one, can't wait to read more, wherever I can find it.
Posted by Unknown at 6:00 PM