Kung-Fu Klassix: The Kid With the Golden Arm

The Kid With the Golden Arm
Directed by Cheng Cheh
China, 1979 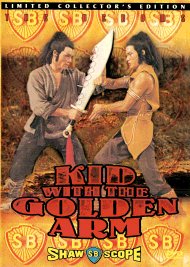 So, there's this honorable society that's tasked with escorting a shipment of gold to a region that has been hit by a famine, but there's also an evil gang that wants to steal the gold. That's enough of a plot for a kung fu movie, right? I guess so, because that's what happens in this classic film. It's pretty much non-stop action, with the good guys, led by Yang, who has one of those big swords that has rings attached to the blade (guys in old kung fu movies are pretty much defined by their weapons), trying to fend off the bad guys, let by the eponymous fellow, whose arms are apparently so strong, they can fend off anybody's blade:

The good guys also have two guys called Long Axe and Short Axe (which is something of a misnomer, since he carries two axes), who keep score of how many bad guys each of them has killed, Li Chin-Ming and Leng Feng, a pair of star-crossed lovers who regularly bicker about Li's sense of honor even when his life is in danger, and Hai Tao, a wild card who kind of wanders into the battle on his own as a drunken goofball (but not really a drunken-style fighter) who can kick everyone's ass.

On the bad guy's side, there's Silver Spear, Brass Head (who wears a helmet that makes his headbutts pretty deadly), and Iron Robe (who wears, yes, metal clothes as armor, but also carries a razor-sharp fan), as well as a group of guys called the Seven Deadly Hooks, although they get dispatched pretty quickly by the Axe brothers.

The plot seems pretty straightforward, with each side having a clear goal, but there are a surprising number of subplots that pop up related to things like Li Chin-Ming and Hai Tao's rivalry (when the former is poisoned with a "Sand Hand" attack, the latter sticks him in a furnace to burn the poison out of him) or what's really going on with Yang, who seems like a pretty crappy swordsman for a well-respected leader of upstanding individuals. The bad guys make various attacks and lay traps that take out a bunch of  the unnamed members of the team as the good guys try to complete their journey, and various members of both sides meet gory ends (a specialty of director Chang Cheh, who reunites the cast of Five Deadly Venoms here for quite satisfying results). It's a bunch of inevitable fights, but they're mostly pretty awesome, starting out kind of rote, with movements that aren't all that impressive, but the challenge and effort ramping up with each subsequent battle, leading up to a final showdown between Hai Tao and Golden Arms, with twists sure to reveal themselves as betrayers and double-crossers make themselves known.

Much of the action ends up being pretty great, with an early weapon-based battle between Hai Tao and Iron Robe being the point that the action really kicks into high gear:

After that, things get extra awesome, with a battle between the Axes and Silver Spear being nothing shot of epic and the final duel(s) involving Golden Arms, Li Chin-Ming, Hai Tao, and others all acting as gripping, Shakespearean drama full of moments like this:

For a movie that's little more than one fight scene after another, this one is pretty cool, full of great action and drama that makes sense among all the punching and stabbing. If you're looking for some cool old-school kung fu involving a bunch of different styles, some wacky weapons, and some amazingly choreographed battles, you can't go wrong here.
Posted by Unknown at 12:06 AM