The fifth annual Chicago Alternative Comics Expo (CAKE) took place last weekend, and it was a blast. I've gotten more and more involved in helping out with the festival over the past few years, and this year, once again, I handled the official CAKE social media accounts, so if you're interested in what I saw during the fest, I recommend heading over to the @CAKEChicago account on Twitter.

As for what I ended up bringing home, here's what ended up being a pretty massive pile of comics: 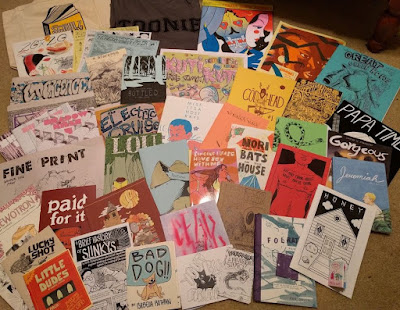 Let's see if I can detail all of this comics goodness:

Along the top row:

Next row:
Next row:
Next row (if it can be called that; this "row" sort of ends in the middle of the pile, just to the left of Nori and the Bats in the House):
Next row (what the hell, we'll just call this the last row):
And that appears to be everything. Whew! I'll be trying to get some more blogs about some of these cool comics up over the next few weeks, so stay tuned. And now we can start planning for CAKE 2017!
Posted by Unknown at 12:38 PM