Slices of CAKE: Jon Drawdoer does some cool drawings 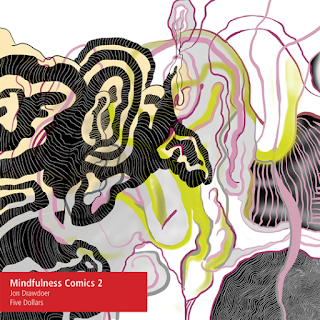 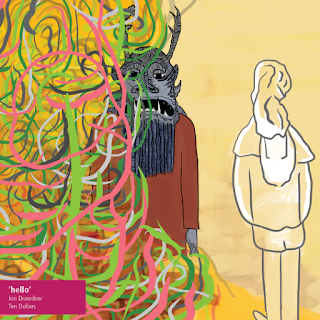 Jon Drawdoer is a fellow CAKE helper-outer and all around nice guy, and he's gifted me with several of the comics that he's made over the past few years, so it's about time I got around to writing about them. Jon is an interesting fellow, and I'm loving the way he is using the comics format to explore some of his inner thoughts in Mindfulness Comics. In this issue, he ruminates on his "second adolescence and interpersonal communication, but the bulk of the issue is taken up with a sort of visual essay about how he tries to consider the way his mind works as a function of his body's physical processes, and how looking at things this way is kind of liberating, since it allows him to refrain from getting too upset if his emotions get out of control or he becomes too self-critical. Since these are functions of his body's chemicals (or as he puts it, drugs going through tubes), taking their actions personally would be like getting angry over a sneeze.

As someone who has had my own struggles with depression and controlling my emotions, I find this to be fascinating, and the way Jon looks at things is definitely worthy of consideration. He details his own process of meditation, demonstrating the value of taking the time to understand why he feels the way he feels and thinks the way he thinks.

And since this is a comic, the visuals play as much of a part as the words here. Jon fills pages with intricate, near-abstract swirls of imagery that play off what he is saying beautifully, illustrating the snarl of the mind's inner workings and the attempts to begin to understand it, if not actually control it. It makes for a lovely, near-breathtaking illustration of a concept that's hard to wrap your head around. I'm really glad I read it, and it will continue to give me plenty to think about. 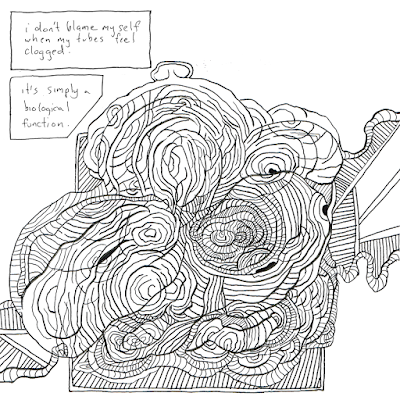 With Jon's newest comic, Hello, he seems to go in a more stream-of-consciousness direction, using mostly wordless imagery to depict all sorts of odd transformations and scene changes. It would probably make a cool animated short, with one odd tableau leading to another and lots of clever shifts between styles. It's in bright, striking color, and it appears to have been created digitally, making use of computer-created art alongside hand-drawn imagery (and maybe even some photo manipulation) to come together into a strange, fascinating whole. I dig it. 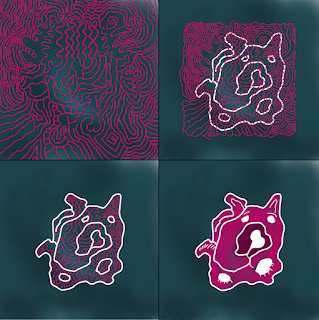 With these two releases, I feel like Jon has really come into his own as an artist to watch, and I'm excited to read more of his work.
Posted by Unknown at 12:30 PM