Slices of CAKE: Ben Passmore is smart, yet playful 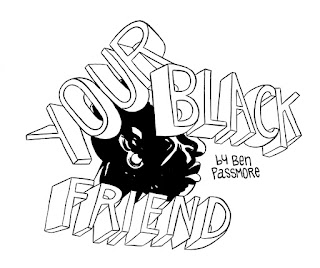 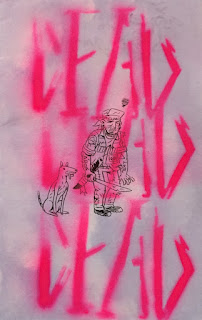 I discovered Ben Passmore a couple years ago at CAKE, and I've been excited to pick up some new comics from him each new year. He's got a great style that's full of expressive cartooning and dynamic action, and his writing is a mix of philosophy, goofy jokes, highly particular pop culture references, and cynicism about the world (there's a definite reason why so many of his comics take place in a post-apocalyptic wasteland) leavened with poking fun at himself.

Interestingly, his new minicomic Your Black Friend strays away from that template. It's more of a treatise on race in our society, and its incredibly instructive and insightful, taking the point of view of a black person who has friends who are white and liberal, yet still do plenty of clueless things that drive him crazy. I've seen plenty of essays about this subject over the past several years, and as a white person who tries (and probably regularly fails) to be aware of how easy my life is in comparison to those of other races, I'm glad to have regular reminders of the fine line that many African Americans have to walk in our society and the stupid attitudes that I need to adjust.

Passmore's version of this type of essay is a good one, looking at the subject from several angles, with his main character demonstrating anger over the casual racism that he sees every day, expressing frustration over how his friends act enlightened but still view him as a sort of exotic accessory and co-opt his identity without thinking, and even feeling somewhat distanced from other black people due to the way he acts and dresses. That's what really makes this work, I think: Passmore doesn't try to sell this as an example of the universal black experience; he looks at one person's experience and notes the difficulties that he faces every day, both from others and himself. And he does it in a manner that conveys anger, sadness, uncertainty, and even humor, offering some great insights for the reader. I think it's really something special.

With Dead, Dead, Dead, Passmore is back in his comfort zone, presenting a series of somewhat goofy stories in his usual post-apocalyptic hellscape and touching on religion, art, consumerism, and violence in an almost stream-of-consciousness manner. Most of the story follows his "Nolimitz" character, a drifter who keeps running into people who want to kill him, at which point he ends up beating them to death in action scenes that rival most any superhero smackdown.

There's plenty of symbolism/commentary going on here, with my favorite bit being a corporate executive offering food to the character, but having his goons literally take an arm and a leg first, then giving him a peg leg, saying that the company values their customers' sense of well being. It's a ghastly look at how the rich treat the poor, and the comeuppance the bad guys receive is enjoyably therapeutic.

I also liked a bit in which we come across Jesus hanging on the cross, arguing with God (who appears as a giant disembodied hand) about how antiquated and ridiculous the Christian religion is, before Nolimitz shows up and beats them both up. It's pretty funny, and I love the way Passmore depicts the action, with his character making crazy jumps and cutting people in half with his machete. This whole minicomic is full of that sort of thing, and it's a delight. I don't always fully understand what Passmore is saying, but I love his passion and how he seems to be having so much fun creating mayhem and destroying the various philosophical ideas he evokes. I'm always up for more of this sort of thing, so here's hoping he'll have more to offer at next year's CAKE.
Posted by Unknown at 9:58 AM