He's a Madman, man! I'm mad about Madman! And other related puns.

Oh, kick ass! This is some of the best news I've heard lately:

BERKELEY, CA -- This April, Michael Allred's pop classic MADMAN bolts back to stores from Image Comics! A modern masterpiece, MADMAN was Adult Swim before cartoons were cool. Now Image is taking the character to the next level with an all new series, and a hardcover collection of every MADMAN adventure! 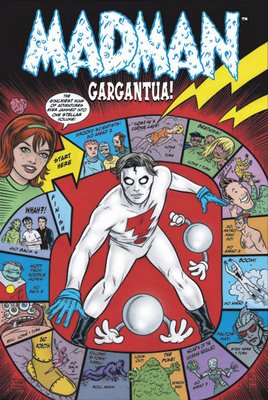 That's as awesome as news gets, baby! I've been meaning to do a Madman/Mike Allred retrospective post, so now I'll definitely have to get around to it. I'm currently squinting my way through The Vault of Michael Allred #2, and reading this "scrapbook" series has got me all excited about Madman and other Allred works. So now Madman is a book that I'm trying to collect all the issues of. Someday I'll even find Dead Air, Graphique Musique/Grafik Muzik, and Creatures of the Id. If I hadn't already found most of the issues, I would definitely be in line for this omnibus edition. Maybe I'll still get it anyway. And a new series! I had been wondering if Allred would return to Madman, since in many of the articles and interviews that are reprinted in Vault, he said that his intention was to do 102 issues of the Madman series, in an attempt to copy Kirby's run on Fantastic Four. If you count all the Madman series and The Atomics, he's done 41, I think, so he still has a quite a way to go. Like I said, I couldn't be more excited!
Posted by Unknown at 11:26 AM