In which deaths are noted 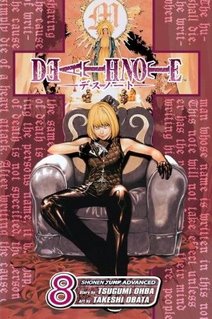 Somehow, Death Note keeps going strong, eight volumes into the story. It seems like something that could play itself out quickly, but writer Tsugumi Ohba manages to keeps the crazy plot twists flowing and changing up the conflicts regularly. For the uninitiated, here's the basic premise: Shinigami, the Japanese gods of death, regularly kill humans with the use of a notebook called a death note. Whomever's name is written in the notebook dies. On a lark, a Shinigami named Ryuk drops one of these death notes in the human world to see what a human would do with it. The notebook he drops is found by a high school student named Light Yagami, who proceeds to test the capabilities of the death note, then decides that he will use it to rid the earth of all crime, with the added benefit of eventually ruling the world. At least, that's his goal. As you can imagine, complications ensue. That's all you really need to know if you haven't read any of the series; it's much of the setup at the beginning of the first volume. So, if you want to go into the series fresh, watch out for SPOILERS throughout the rest of the review. However, I'll try not to spoil any of volume 8, so don't go away if you have yet to read that one.

After the setup, the series picks up speed and starts up with its trademark quality: crazy plot twists. Light quickly reveals himself to be quite the budding sociopath; he starts regularly killing criminals of all sorts, all around the globe; he quickly kills anybody who gets in his way, including policemen and FBI agents; and he uses his father's position in the Japanese police force to gain information and evade his pursuers. Soon a sort of cult springs up around the world, dedicated to Kira, the nickname given to the person or entity who is supernaturally executing criminals. The authorities bring in a detective named L, who turns out to present a great challenge to Light; the two are very closely matched in intellect and are equally crafty. Then Light's father asks him to join the investigation, which means Light and L will be working together directly, with Light obfuscating any police findings and L trying to pin evidence on Light, his prime suspect. It's crazily tense, and the struggle between them lasts for at least three volumes. There are some great scenes, such as when Light and L have a tennis match while trying to size each other up. Their struggle is complicated when another death note holder enters the game: Misa Amane, a young model/actress who idolizes Kira because he killed the criminal who murdered her parents. She does everything she can to find the identity of Kira, messing up Light's plans considerably. Eventually her bumbling leads to Light's downfall, and he takes a huge gamble by giving up ownership of the death note, which causes him to lose his memory of the entire experience. He ends up joining L, as they are tracking a third Kira, who appears to be killing people in order to further the financial interests of a large Japanese corporation. They spend the better part of three volumes of the series working together like this, until it is revealed that Light had set the whole memory loss thing up as part of an elaborate plan; he regains ownership of the death note, gets his memory back, and kills L, just like that. I'm amazed that the primary struggle in the series, between Light and L, ended so quickly; it's almost an afterthought. Maybe I'm too used to American superhero comics, in which Batman continually fights the likes of the Joker and keeps sending him back to Arkham Asylum, even after the Joker has murdered thousands. I guess when the prospect of open-ended storytelling is removed, writers can make huge changes to the status quo much more easily and with more finality. Anyway, after L is dispatched, Light pretty much goes on unopposed in his plans to take over the world. We get a brief glimpse of two kids named Mello and Near at a private academy (by the way, I should mention that Ohba seems to have trouble coming up with Western-sounding names, leading to humorous titles like Aiber and Wedy, and the aforementioned Wammy Academy. It's no big detriment to the book, but it amuses me whenever some American or European character pops up with an improbable moniker), but then the story jumps forward several years, and we see that Light is now working full time for the police, although (for some reason) they haven't made much progress in capturing Kira, and the world is really starting to change after several years of Kira's reign as executioner. However, Mello and Near show up again, and it turns out the academy they were attending was grooming possible replacements for L, in the event of his death. Mello is a rebellious sort, and he leaves the academy to pursue Kira by his own means. Near graduates and begins working with the FBI. The seventh volume ends when Mello's group (mostly mafia types) kidnaps Light's younger sister to try to get Light's father to give up the death note that is in possession of the Japanese police.

The action starts to ramp up again in the eighth volume, as Light tries to lead the Japanese police in recovering his younger sister. Light is also acting as L, since nobody outside of his group knows L is dead. He ends up trying to work with Near, who has convinced the President of the United States to form a group dedicated to stopping Kira. Near immediately figures out that Light is not L, and that Mello is behind the kidnapping. I won't give away how the kidnapping is resolved, but it's a pretty crazy scheme. Soon enough, the characters are locked in a three-way struggle, with Light, Near, and Mello each trying to outsmart each other and influence global affairs to bring down the others, even as a new Shinigami enters the scene to try to recover his lost notebook, which happens to be one of the notebooks the human characters are screwing around with. It's more of the old plot twists and struggles, and you get the sense that Light had gotten kind of bored without anybody to match wits with. He starts to really rise to the occasion and come up with imaginative uses of the death note to foil the others' plans, and he continues to go especially psychotic when dealing with Misa, who is still hanging on his every word and striving to get him to pay attention to her. Luckily, she has made a trade with the Shinigami: she gave up half her lifespan to get Shinigami eyes that will tell her someone's name and remaining lifespan upon looking at them. This makes her useful to Light, so he keeps her around, throwing a modicum of attention (but not really any affection) her way in return for the use of her abilities. At one point he even proposes to her (in the "sure, I'll marry you, now get me that information I asked for!" type of way) just to make sure she'll quit her acting job so she won't be an easy target for assassination, depriving him of her eyes. It's a highly exciting turn to the story, with the various struggles taking on more international consequences (at one point, the US President's life is threatened by at least one of the three factions). I can't wait to see where it goes and how Ohba will up the ante when this particular struggle is played out. I believe the series has gone on to at least 12 volumes in Japan; it might even still be ongoing. I do know that I'll be devouring each volume as it is made available in the US; volume 9 is scheduled to arrive in January.

I should also mention the art by Takeshi Obata, who also illustrates the popular Hikaru No Go. It's beautiful stuff, with great character design. I love how he demonstrates the eccentricities of L and his "heirs": L and Near sit in introverted, hunched over positions and arrange the things around them, like coffee creamers or dice, in elaborate patterns and towers. Near, being younger, seems to spend his deduction time playing with toys and throwing darts. Mello, on the other hand, is arrogant, sitting confidently upright, but still demonstrating weirdness by always eating chocolate bars, often leaving them hanging out of his mouth. Light is another great design, always confident, while the other detectives around him (including his father) often stare agape at the crazy plot twists or Light's amazing deductive powers. Light also does this hilarious pose where his face is lit from below as he contemplates his grand scheme for world domination (I call it the Kubrick look, since it's the type of stare that Malcolm McDowell or Jack Nicholson would give in Stanley Kubrick movies). And Misa is uniquely designed in that silly Japanese schoolgirl/gothic lolita style (never mind that she has to be about 22 or so by the time of this volume). Her facial expressions are priceless, especially the way she is so eager to please Light, but so disappointed when he ignores her.

So, it's a great series, and unless it takes a drastic turn for the worse, I'll be following it for as long as it continues. Please let me know if you agree/disagree, or have any thoughts to add.
Posted by Unknown at 10:23 PM