I appear to be slacking. Eh, sometimes the writing urge doesn't strike. But I do have a review of Atomic Robo: Dogs of War #2 up at Comics Bulletin. And also this: 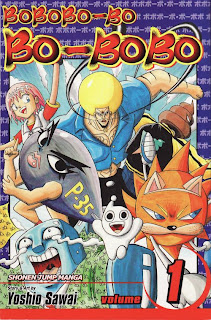 Sometimes you read a comic so bizarre and out-of-the-ordinary, that you feel like you mind has been permanently warped. This can be a good experience (as with some of Grant Morrison's more outre works) or a bad one (Tarot: Witch of the Black Rose springs to mind), but it's rare (for me at least) to be left with a feeling of babbling incomprehension, unsure what to make of the book, not knowing whether it was good or bad, and suspicious as to your own (not to mention the author's) sanity. Such is Yoshio Sawai's BoBoBo-Bo Bo-BoBo.

Or maybe it's just a case of material based on the intricacies of Japanese language and culture not surviving the translation. There's also the possibility that Sawai is just filling his work with intentionally stupid and nonsensical material in an attempt to satisfy the easily-entertained children's audience. Myself, I prefer to think of him as deranged, because that just makes the book seem funnier. And boy, is it funny. I laughed out loud at several points, if only because Sawai managed to hit the perfect combination of absurdity and surreality.

I don't know if it's worth it to explain the plot, but I'll give it a try. Viz certainly doesn't make it easy, since, according to Wikipedia, this "first" volume is actually the eleventh volume in the Japanese series. Viz gave it a try a couple years ago, putting out a different "first" volume that was actually the ninth volume. The result is kind of charming; with no buildup or backstory, it's seems as if Sawai has thrown readers into a world where weirdos constantly wage ridiculous battles with each other, for no apparent reason. Bo-BoBo is a blond-afroed muscleman who fights evil using his "Fist of the Nose Hair" technique (which probably made more sense in earlier volumes; at this point, he doesn't really use his nose hair much, choosing instead to transform into crazy forms and smash bad guys cartoonishly). He also has quite a posse joining him (they can all be seen on the cover): Beauty, a teenage (preteen?) girl, and the one "normal" person in the cast; Poppa Rocks, a sort of cartoon sun; Torpedo Girl, who is pretty much what her name describes; Softon, a guy with a pile of poop for a head; and my favorite, Jelly Jiggler, a sentient mass of human-shaped Jello. I mean, come on, that's a great name; just saying it makes me laugh. There's also another "normal"-seeming human boy named Gasser, who spends this volume in captivity, and the doughboy-esque Dengaku Man, who seems to be on Bo-BoBo's side, but mostly serves as a punchline for jokes.

As for the actual plot of the book, it's pretty much just a string of fights, with Bo-BoBo and pals battling a series of crazy villains who fight with techniques like the "Fist of the Gothic Font" or "Fist of the Objet d'Art." Hey, why not? These fights generally see one of the villains using some crazy attack, and the heroes repelling it in a silly nature. Then they counterattack, doing something silly, and other silliness ensues. Characters often get hit and spew blood out of their mouth. And through it all, Beauty just sits and watches, constantly reacting in bug-eyed disbelief at what she is seeing. In fact, some of the funniest moments probably come from her reactions: 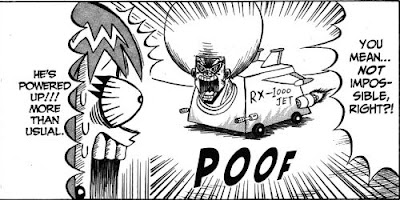 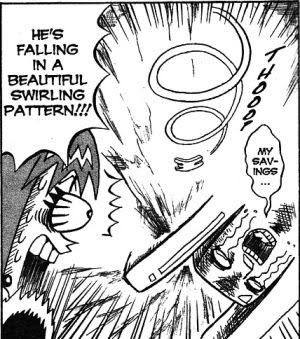 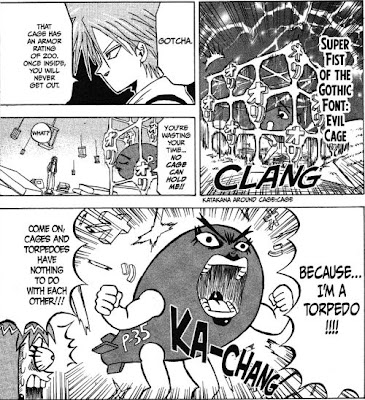 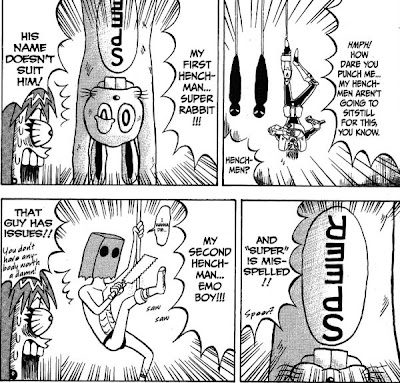 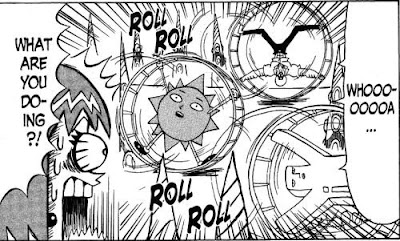 Really, those don't make much more sense in context than they do here. There's plenty of other weirdness and craziness though, sort of similar to a Tex Avery cartoon, in which characters suddenly turn into bizarre forms, or produce weapons and objects seemingly out of thin air: 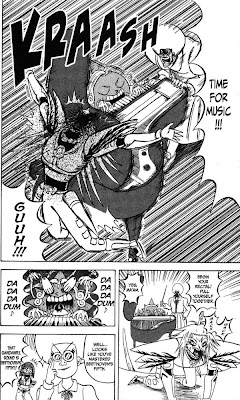 There are also some hilariously-timed moments, such as this scene during a fight in which all the participants are hanging over a pit with bungee cords connected to their legs, and Poppa Rocks and Jelly Jiggler have seemingly plummeted to their deaths: 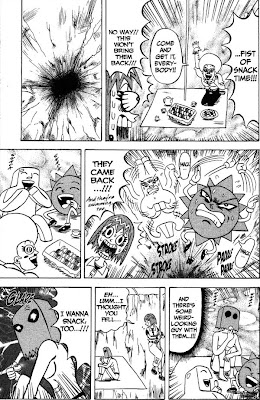 Or Bo-Bobo having a haiku contest with an opponent: 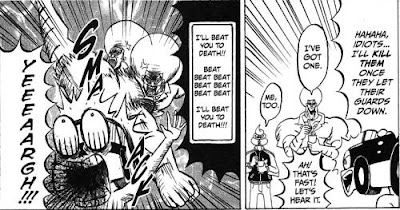 And some moments are just plain surreal, as in a scene in which a viewscreen bearing the chief villain's image appears on Poppa Rocks' crotch, and Bo-BoBo reacts to it: 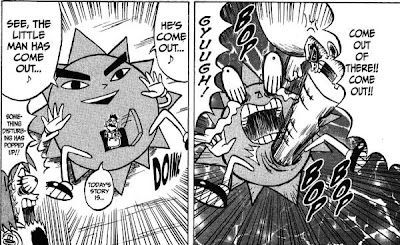 I don't even know what to say to that sort of thing.

So, I don't know whether this series is actually good or if I can really recommend it to anybody; it's so strange and weird that, while it does tickle my funny bone, it might just be annoying to others. But I will say that I enjoyed it, and upon finishing the volume, I often found myself chuckling when remembering some moment or other. Of course, my IQ might simply have lowered to the point at which I laugh uproariously at the likes of waterskiing squirrels or LOLcats. But by all means, give it a try, if you want to risk similar brain damage. I could use the company.

This review was based on a complimentary copy provided by the publisher.
Posted by Unknown at 8:39 PM