The Boy Who Made Silence: I don't fit that description

Hey, look at this!  I'm blogging!  It's been a while, but that's what happens when I stop reading comics for a couple weeks to plow through a long novel.  I was thinking of trying to write a review, but if I never get around to it, the short version is: Anathem is really good, especially if you like Neal Stephenson, science, and trying to comprehend made-up language.  Also, I feel like I should say something about David Foster Wallace, because he was one of my favorite writers, and I'm really sad about what happened to him, but I haven't taken the time to do some sort of post about him.  So if I never get to it, I'll just say that he was amazing, I loved reading his books, and he will be sorely missed.

But I was going to talk about comics today, so here:
The Boy Who Made Silence #6
By Joshua Hagler 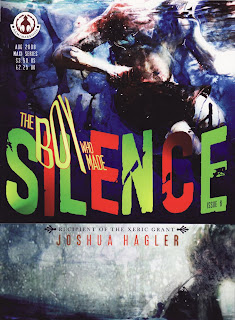 This is the last issue of the first volume of The Boy Who Made Silence; it might be some time before the second half of the story comes out, so there will be some time to reflect on the story and try to decipher all of Joshua Hagler's beautifully bizarre imagery.  It's a strange series, full of amazingly realistic character moments that swirl to the fore through a haze of surreality and near-abstract artwork.  And, as Hagler reveals here in an afterword, it's a deeply personal tale, with many moments taken straight from his childhood memories and interpreted into this weird story of a deaf boy who has some sort of people-connecting powers.
This issue sees all the townspeople who have featured in previous issues gathered together to witness the baptism of Nestor, the titular deaf boy, in hopes that he will once again create the "silence" that enabled them to experience each others' lives in such an intimate manner.  The preacher gives a stirring speech about faith and then performs the ceremony, which leads to a crazy remembered scene from Nestor's childhood and some disorienting storytelling that involves turning the comic upside down and sideways.
Is that a dull-sounding summary?  Maybe so; this series really has to be seen to understand what makes it so special.  Hagler's artwork is just gorgeous, with a combination of realistic and distorted imagery, evocative brushwork that fluidly matches the emotional intensity of the scenes, and colors that enhance the feel of the scene, from greens and browns to set the landscape, to the deep blues of the water during the baptism, to the near lack of color in Nestor's childhood flashback.  The character work is especially good, bringing out the bruised humanity in Pastor Buddy: 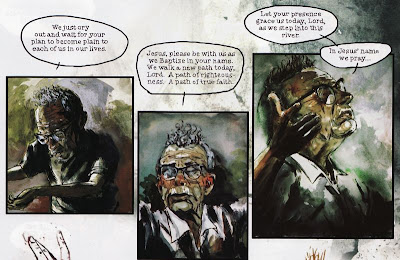 Or the distorted memories of how adults can look to a young child: 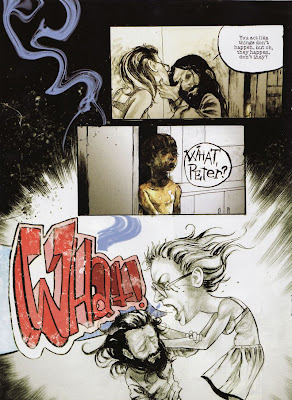 But the thing is, these all seem so real.  The pastor's crisis of faith in the face of terminal illness is exactly the sort of thing that happens every day, and it's made all the more fascinating with Hagler's revelation in the afterword that he grew up in a religious family but has since renounced his faith.  And the childhood memories of a father leaving his family (along with an imagined moment in which Nestor connects with his mom, who, as we've seen in previous issues, is not exactly a tender woman) are so incredibly raw, I found tears in my eyes while reading them.
I'm having trouble articulating what exactly it is that reaches out and grabs me by the throat, but I think it's Hagler's raw, unfiltered emotion, which pours off the page and refuses to be ignored.  As fascinating as it is to read Hagler's explanations of where some of the individual moments came from, they're not necessary to get the full effect of the story.  And even if it is sometimes difficult to understand how everything fits together or where Hagler is going, he still grounds everything in his down-to-earth characters, making you feel like you're experiencing these moments right along with them.
I'm probably not doing this book any justice, but it's such a fascinating, beautiful work, full of real emotion and humanity, that I can't keep quiet about it.  I urge everyone who has the chance to give it a try, since Hagler is a talent that shouldn't be wasted.  I hope to continue to read his amazingly heartbreaking comics for years to come.
Posted by Unknown at 8:52 PM