The Black Diamond: Bypassing everything else out there

In case I don't get around to mentioning it, some movies I saw recently: Burn After Reading is pretty entertaining, if not anywhere near the Coen brothers' best work. I did like the oddly distancing stylistic techniques, like the bombastic score that made it sound like everything was important and world-shaking, when in actuality it was pointless nonsense. Good times, even if it's not going to be winning any Oscars.
On the other hand, The Visitor might be my favorite movie of the year, with an affecting story of personal connection among unlikely people, and a heartbreaking examination of the effects of the U.S. immigration policy. Damn good movie; check it out if you get the chance.
Also, I've got a review of Criminal volume 2 #6 over at Comics Bulletin. That's a good series.
And to business:
The Black Diamond: Get in the Car and Go
Written by Larry Young
Art by Jon Proctor 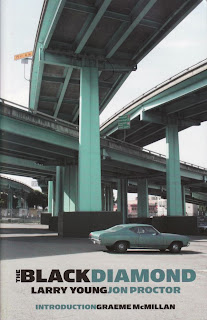 Damn that Graeme McMillan. His introduction to the collected version of The Black Diamond is so insightful, any attempt at critical analysis that I attempt could invite charges of plagiarism. It's a nice bit of preparation for the book, going over a lot of the themes and ideas, but not going too over the top with the praise. That's why he makes the big bucks, I guess.
But it helps to have somebody like McMillan to splash some water on you before you jump into the pool, because simply reading the back-cover summary won't prepare you for the story within. Larry Young seems to promise a "love-letter to the 1970s drive-in movie", but he delivers something much stranger, more of an examination of storytelling, full of misdirection as to where the plot is headed and what it's really all about.
But that main high-concept is a good one: 50 years in the future, the air travel industry has collapsed, and it has been replaced in the United States by the eponymous elevated intercontinental highway where miscreants and nonconformists can live away from the regular Joe Sixpacks. Dentist (orthodontist?) Don McLaughlin's wife is the daughter of the Black Diamond's designer, and when she is kidnapped from a conference in Baltimore, he has to race across the country from his home in San Francisco to save her. That's a great plot-starter, and while it's not like Young doesn't deliver some thrills related to "Doctor Don"'s quest, he also spends entire chapters ignoring it while characters have conversations that only occasionally involve the plot. It could be called Tarantino-esque, especially since the dialogue is quite mannered and not at all "realistic" (not that that's a problem; Young can write some pretty entertaining backs-and-forths), but this even takes a step beyond the film auteur's stylish postmodern revamping of old genres; these characters don't just discuss pop culture, but the mechanics of storytelling itself.
There's also the gradual encroachment of a larger conflict, as the government decides to end the lawlessness of the Black Diamond, sending the army to clean things up. This provides some interesting commentary about global politics and the U.S.'s reliance on oil (a fanciful notion; we're supposed to believe there will be any left in 50 years?), but it ends up providing an odd separate narrative that frankly isn't as interesting as the main one. And even that main "gotta save my wife" quest, which does have some great moments (see below), ends kind of abruptly. Overall, the story doesn't take as much of a narrative arc as a rising curve that just kind of stops. It's definitely an odd duck of a story, and while Young does acknowledge it with his "meta" ending (which even goes so far as to step out of the story and provide script excerpts and a sort of author insertion via captions, it's still kind of unsatisfying.
Or is it? As mentioned, Young is definitely participating in some misdirection, and he seems to delight in confounding expectations. He's busy describing the rules of how stories work, so why not blatantly break those rules? Whether this bothers you enough to be a dealbreaker probably depends on how adventurous you are in what you like to read, or at least what sort of tolerance you have for Young's shenanigans.
And of course, you might or might not like Jon Proctor's art, which has its own stylized appeal (or lack thereof). The character work in early chapters could charitably be described as awkward: 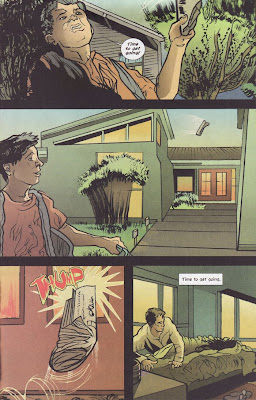 But he does noticeably improve on that front as the story progresses (even if we still occasionally have trouble telling characters apart). And even at those opening stages, the real appeal of his artwork begins to shine through: the dynamic design sense. The sleek lines of cool cars and the long stretches of roadways make for some excellent page design: 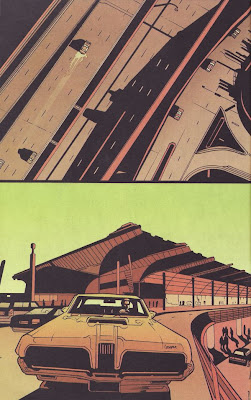 And his thick, ragged brush strokes provide some wild rubble and explosions, along with some expressive sound effects: 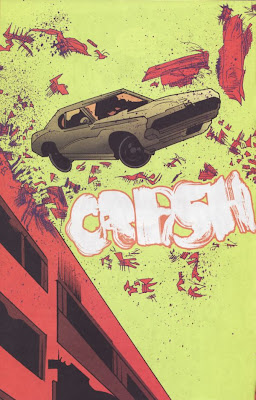 As the book progresses, Proctor's designs get more and more out there, eventually leading to crazy art-deco panel layouts filled with eye-searing washes of fluorescent color: 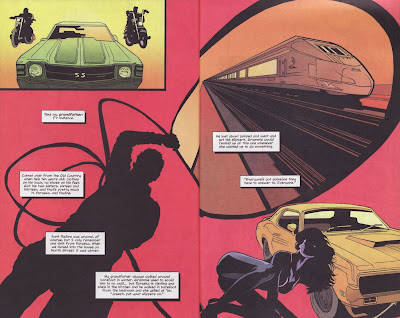 And in the finale, he turns the army's presence into repetetive, iconic imagery that calls to mind Soviet propaganda: 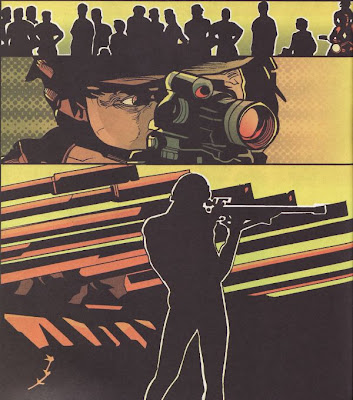 It's striking stuff, and a large part of the appeal of the book. Young's storytelling has a freewheeling quality that might lose the reader at times, but the book is rarely boring to look at.
Overall, I don't know if I could recommend this unreservedly; it's too quirky and strange for somebody expecting a bunch of car chases or something. But if you're willing to open your mind a bit and try to let Young's weird energy in, it's incredibly enjoyable, and unique enough of an experience to be pretty noteworthy. If that sounds like your kind of thing, well, you've probably already read it, but if you haven't, do check it out.
This review was based on a complimentary copy provided by the publisher.
Posted by Unknown at 9:55 PM