More movie talk below, but I also wanted to mention that I watched Exiled last night, and it was excellent.  It's a gangster/crime movie by Chinese director Johnnie To, and it's full of the sorts of stuff I love in movies like that, like brotherhood among criminals, bonding moments during downtime, and operatic shootouts.  The opening is incredible, in which four gangsters gather around a fifth who has gone into hiding with the intent of either killing or defending him; they have a shootout, and then stop, help him unload all his furniture from a moving truck, then sit down for dinner together.  I love it.  If you dig that sort of "honorable gangster" movie that's kind of a subgenre in Chinese and Japanese movies, be sure to check it out. 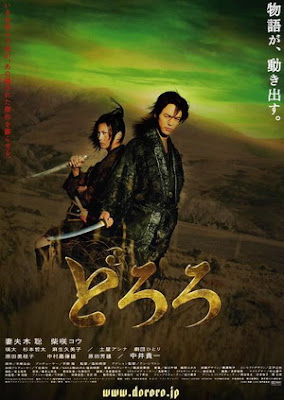 Since I'm such a nut for the manga, I figured I had to check out the recent live-action adaptation of Osamu Tezuka's weird/cool unfinished series.  And the verdict is: not as good as the source material.  Surprise, surprise.  Of course, that's kind of to be expected; doesn't everybody say "the book was better" about any movie adaptation?  And yes, taking an episodic series and turning it into a coherent two-hour story is not exactly easy, but this seems like an oddly piecemeal job.  It might have been better to take the concept and build a new story on it, but the writer(s) of this version took a few stories, changed some stuff around, and added their own elements wherever they felt like it.  It ends up being pretty unsatisfying as a movie, and especially so if you're familiar with the source material.
Although really, aside from the origin story (which has its own changes, including the odd choice to make Hyakkimaru's prostheses of somewhat magical origin) and the finale (which reworks the "wall" story from volume two, but more on that later), they really only convert one (1) of Tezuka's episodes to film.  That would be the one with the moth demon that married a rich guy and fathered a bunch of monster babies that ate the townspeople's children.  Outside of that encounter (which has some nice, creepy visuals, like caterpillar monster kids slithering all over the interior walls of a house), Hyakkimaru's quest to kill demons and regain his lost organs amounts to little more than a montage of him fighting monsters that combine the rubbery designs of Power Rangers bad guys and some silly-looking CGI.
Also puzzling is the casting for Dororo, which pretty much gives away a twist regarding the character's nature that crops up in the third volume of the manga.  I found that odd, along with the age of the character, who looks to be teenage or older here, but I thought was around ten years old in the original.  I guess working with a child actor would have been too difficult?
And then there's that finale.  That story involving two towns separated by a crumbling wall was one of my favorites in the whole series, but the movie elides the entirety of the interesting conflict (which involved demons spurring the people to senselessly kill each other out of regional pride so they could feed on the dead bodies) in the original story and makes it all about Hyakkimaru's showdown with his father and brother.  I do realize that father/son conflict is the basis of most Japanese movies, and it was certainly an aspect of the original story as well, but this version got pretty damn tiresome.
So, I wouldn't recommend the movie, even if you don't have experience with the manga.  Read the Tezuka instead; that will give you hours more entertainment than this silliness.
-----
If you're interested, you can check out the trailer to the movie here.  And here's a clip from the 1969 anime adaptation of the series, which lasted 26 episodes and actually came to a decisive conclusion (episode list here, if you're interested).  Finally, here's the opening cinematic from the 2004 PS2 game Blood Will Tell, another adaptation of the series.  Since I've become a Dororo connosieur, I'll have to check that one out sometime.
Posted by Unknown at 12:42 PM