Bluesman: Given the name of the blog, this seems right up my alley

In case anybody missed it, here's the funniest thing I've seen this week: Chip Zdarsky's notebook of Marvel Comics story ideas.  It's a milk-snortingly hilarious collection of sexual pairings between characters, lampooning the popular trend of "serious" attempts to make superhero comics "adult" while still obsessively making sure all the characters' powers are used correctly and whatnot.  Or maybe it's just funny because he says "fuck" a lot.  Whatever.
And, although I realize this is kind of old, I wanted to point out this article about Shigeru Mizuki's manga about war.  It's got some fascinating details about his experiences as a soldier in World War II and the manga he created about the subject.  There's even a translated story called "War and Japan" which deals directly with the atrocities committed by Japan and how the nation should deal with them instead of trying to ignore and forget them.  It finishes with a personal anecdote that I find amazingly emotional, dealing with themes like guilt and forgiveness.  Check it out if you haven't before.  And how about some translated Mizuki manga here in the West, please?
Bluesman
Written by Rob Vollmar
Art by Pablo G. Callejo 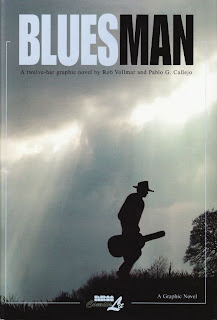 Who doesn't love the blues?  It's a quintessential American art form that makes for great listening today, but many of us probably don't stop to consider its true origins.  In our current, fairly enlightened times, it can be easy to forget some of the ugly racial history of the United States and how entire groups of people were treated as subhuman, even though the law had supposedly declared them equal.  Rob Vollmar and Pablo G. Callejo examine this culture in Bluesman, a story about a traveling musician in the 1920s, and it's a fascinating look into an era that few of us even realize took place.
While the story of Lem Taylor is fictional, it seems all too real, as we see him and his colleague Ironwood Malcott travel through Arkansas looking for work.  Lem plays guitar, and Ironwood piano; they end up in a small town called Hope, playing in a bar on the outskirts of town.  And even though they're lucky enough to be offered a chance to travel to Little Rock and record their music, circumstances soon transpire that dash their hopes forever.
Of course, if Ironwood, an older, more experienced man, had any restraint, all might have turned out okay.  But even though Lem begs him to do otherwise, he ends up chasing after a girl, getting involved in a lovers' quarrel, and causing a violent scene that leaves Lem on the run and afraid for his life.  This also drags in a local sheriff, who gets stuck in between trying to solve the mystery and trying to hold off a mob of angry white people who are aching to participate in a lynching.
It's a pretty engaging story that Vollmar weaves here, and Callejo does his best to bring it to life, but he makes the decision to use a "woodcut" style that might hamper the expressiveness a bit.  In the early chapters especially, the art often seems pretty awkward, with the thick lines perhaps causing some lost definition.  Still, Callejo does a fine job of making characters expressive, and I especially like the way he distinguishes them racially.  Black characters, who make up the majority of the cast, don't just have extra shading to make their skin darker, but their features seem more African, especially in the prominent, rounded cheekbones:

Callejo does seem to have some problems depicting hands, sometimes contorting them into odd shapes or making fingers look like disconnected ovals: 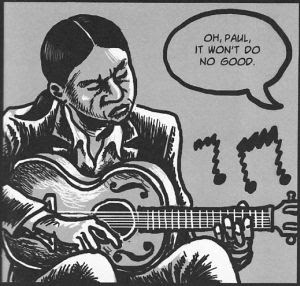 But he makes them look good in other scenes; I especially like the skeletal appearance of Ironwood's hands when he plays the piano:

The art does improve as the book progresses, and Callejo turns in some really nice work, using techniques that call to mind Thomas Ott's scratchboard art at times, and showing that when he puts in the time to use finer lines, the details really sing:

I do wonder at the effectiveness of the depiction of music, however.  While it's not a huge part of the story, some key scenes see Lem and Ironwood playing the blues, and Callejo usually depicts the music as notes running along the top of the panels: 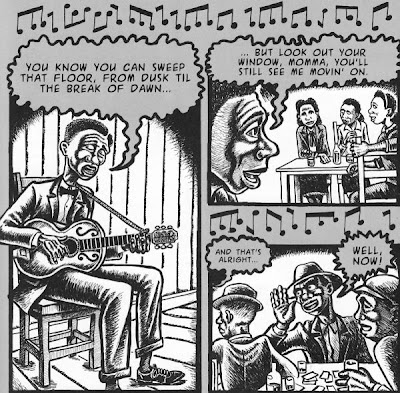 Not being a musical person, I don't know if these notes mean anything, or would sound anything like the actual tune being played; rather, they seem like a visual signifier for generic "music", and they don't seem to convey anything besides the fact that music is being played.  That's a difficult feeling to convey in comics, and artists have tried a variety of effects to that end, like crazily distorting the notes or showing them flowing through the artwork itself.  But the version used here isn't especially effective, seeming kind of stiff and at odds with the characters' reactions to the music.
The story takes several twists and turns, but it eventually leads to a big, satisfying climax, although it might be a little over the top with everything that happens.  It's nicely done though, and as a cap on the emotional arc of the story, it works beautifully.  And there's also a nice epilogue that immediately calls said climax into question.  It's a nicely-written book, and a great look at an era that wasn't all that long ago, even if it seems so far away.  Let's not forget the lessons of the past, all right?
This review was based on a complimentary copy provided by the publisher.
Posted by Unknown at 8:09 PM