Linkages: I'm sure plenty of people have linked to this Art Spiegelman piece about old editorial cartoons dealing with a ship full of Jewish refugees from 1939, and how that relates to the way cartoonists deal with issues today, but I wanted to make sure I pointed it out, since I found it quite interesting.
In other news, Fantagraphics is putting together a couple of collections of some of Jason's books, which is nice. First is Almost Silent, which will include You Can't Get There From Here, Tell Me Something, Meow, Baby!, and The Living and the Dead. The second, which is tentatively titled What I Did, contains The Iron Wagon, Sshhhh!, and Hey, Wait. I'll probably pick up the second one, but I already own most of the first volume, so I'll pass on that one. Still, good values, good production, great comics, don't miss out if you haven't read them. Jason is awesome.
I'm sure people have been talking about this, but I found it interesting and worth mentioning: Longbox, a digital comics platform that seems based on iTunes. I don't know if it will take off, but it seems like a good, multi-company solution for digital distribution, finally making online comics sales something that makes sense. I'll be watching and seeing how it plays out.
I don't know if this is new or not, but you can read Agents of Atlas #0 for free at Marvel's digital comics site; it's a nice prequel to the series that's currently running, filling in the gaps between the miniseries and the ongoing. Go Jeff Parker!
Also not all that new: the official American trailer for Hayao Miyazaki's Ponyo! I can't wait to see this.
And while I'm linking to videos, here's the latest episode of my main man Tucker Stone's show Advanced Common Sense. I saw some of the rough footage from this shoot when I was in New York, and it was quite hilarious. I encourage everyone to email Tucker and demand a release of the deleted scene in which he makes out with a fish.
Also, I reviewed Dark Reign: Zodiac #1 over at Comics Bulletin earlier in the week. That was a pretty good comic; Joe Casey and Nathan Fox!
Okay, actual content:
Detroit Metal City, volume 1
By Kiminori Wakasugi 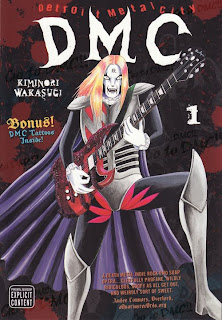 Ah, the rape joke. Such a classic form of comedy. Why, I remember the nights I would sit around the campfire with my family, aunts and uncles, grandparents and cousins, all relating our favorite rape jokes and laughing uproariously. Such grand times.
Wait, I'm mistaken. I've been informed that rape is a subject never to be broached in comis, much less in jest! How could anyone take it lightly? Only emotionless monsters would ever consider such an outrage!
Well, obviously the truth is somewhere between those extremes, but Detroit Metal City definitely skews toward the former, seeking to make comedy out of its outrageousness. It certainly does contain more uses of the word "rape" than I can ever remember seeing between two covers, but the key thing to note is that makes it really funny. It's got that Japanese style of humor, getting a lot of mileage out of awkward situations and over-the-top silliness. And while the art isn't anything to write home about, its bare-bones stiffness manages to make the goofy antics that much more strange and humorous.
The concept: meek, gentle Soichi Negishi wants to live a chic life in the big city (Tokyo), playing indie rock, hanging out in trendy locations, and meeting cute girls, but somehow he ended up as the lead singer of the titular "evil-core" metal band, going by the name of Johannes Krauser II and dressing in a ridiculous getup (my favorite part of the outfit are the oh-so-dainty ruffles on the wrists and neck) while screaming songs about murder, rape, blood, and mayhem. He hates the music that he plays, but he also happens to be really good at it when he gets into character, and his fans can't get enough of his antics. Each chapter sees some sort of conflict between Soichi's on-stage and off-stage lives, usually to incredibly humorous effect. It usually starts small and builds to a goofy climax that has the reader laughing out loud; for instance, one chapter sees him trying to sing his cute indie songs (which are as cheesily nice as DMC's are nasty) on the street, only to be drowned out by a DMC cover band. Annoyed, he decides to show the punks how it's done, getting into his costume and showing them up as Krauser II. But when the police come to break up the disturbance, he's mortified and tries to turn himself in, only to trip and accidentally brain a cop with his guitar, thus maintaining his reputation as a menace to society.
Other stories continue along those lines, with running gags like a girl Soichi has a crush on continually getting humiliated by DMC, or the band's ridiculous manager, a woman who is constantly urging them to make her panties wet with their rock and shouting lines like "I danced till my pants turned into a bowl of clam chowder." It can get a bit repetitious if read in a big bunch, but take a break between chapters and you'll find yourself laughing at the jokes over and over. I know I did.
As I mentioned above, the art is nothing too special, but it's effective for what it is. The characters are often quite stiff, and one might not realize what sort of ridiculous antics the band was up to if fans didn't provide commentary: 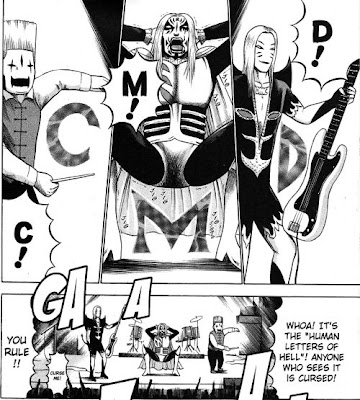 As for facial expressions, Soichi-as-Krauser only seems to have one, an open-mouthed maniacal scream. Without the makeup, Soichi has a couple, usually either a placid smile or a Krauser-esque look of shock and dismay: 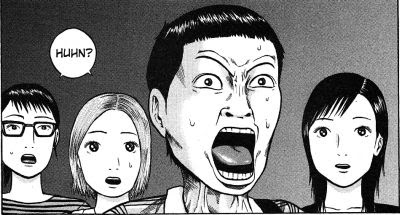 It works for the story though, kind of putting a minimalist style on things, tending toward something like Cromartie High School, but not quite reaching those levels of abstraction. The low levels of detail work to make the rock and roll scenes more comedic, since the fans are getting all worked up over what doesn't really seem to be that big of a deal. The goofy costumes and lyrics about "raping all women" are pretty stupid, so to hear a fan react to them by saying "It's like I'm being raped by the music!" just makes the whole thing funnier.
And another nice aspect of the comic is that over the course of the volume, Soichi seems to be growing into his Krauser persona, rather than always hating it and wanting to quit. He finds a few good off-stage uses for the character, and he even seems to be enjoying the release that the shows provide. At the same time, he's progressing in his relationship with his would-be girlfriend, which should provide plenty of humor in future stories, since she's sympatico with his metal-hating trendiness.
Even though this is only the first volume, the series is quite hilarious, always upping the ante on what sort of perversity you expect from the band and coming up with funny ways to mix Soichi's disparate worlds. It might be hard to keep raising the stakes; the antics could get predictable and tiresome, but that's certainly not the case here. I expect future volumes to only get funnier. 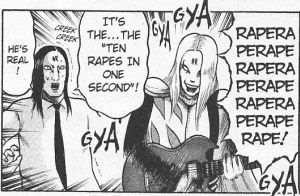