Elsewhere: I reviewed Agents of Atlas #6 at Comics Bulletin, and the first episode of Mike Judge's new cartoon The Goode Family at The Factual Opinion. In case you're not sick of me yet.
Hey, here's something I wasn't expecting: Naperville, Illinois (a town just a couple suburbs away from where I live) is planning to install a Dick Tracy statue in the downtown area. That should be a sight to see; I'll be sure to go check it out and post pictures when it goes up.
And: you can see a preview of Brian Fies' upcoming book, Whatever Happened to the World of Tomorrow? here; it looks interesting. I liked his book Mom's Cancer, so I'm curious to see his next project.
Ikigami: The Ultimate Limit, volume 1
By Motoro Mase 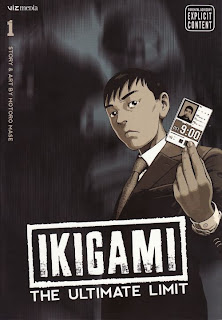 Seinen manga! That seems to be the mostly-unknown frontier in what has been translated into English. The reputation of the genre seems to indicate that it can be a place for mature, imaginative stories, but it also can seem like the equivalent of Hollywood action movies, full of gratuitous sex and violence. Not that that's a bad thing; you just have to be prepared for the occasional dose of nihilism. And that seems to be where Motoro Mase's Ikigami is headed, with a premise that promises lots of death and emotional anguish. In an alternate-universe version of Japan (or some other country that features Japanese character and place names), the government has instituted a program designed to encourage people to value life, in that you don't know when it might suddenly end. Everybody is injected with a vaccine as a child, and a random selection of the vaccines contain a "nanocapsule" that will burst and kill them at some specified piont between the ages of 18 and 24. Only one in 1,000 get the unlucky dose, but that's enough people that one person dies each day. Since you never know if you could be next, you're supposed to live life to its fullest or something. Of course, if you make it to 24 without dying, you're home free and can turn to gluttony and debauchery, but I suppose the idea is to get people trained in a certain way of life while they're in their formative stages.
The art is pretty suitable for the setting, giving a rounded, textured sheen to the characters that makes them seem more three-dimensional than manga characters often seem. That is, they don't sport the flat faces and huge eyes of a lot of manga, but rather a more realistic look, to the point that characters appear to be Japanese, although there is sometimes a difficulty telling them apart, as with these two men who appear nearly identical: 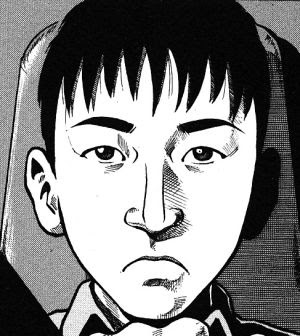 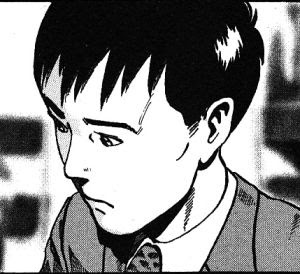 The detail certainly adds to the atmosphere, with lots of shadows to establish the mood of grimness and death: 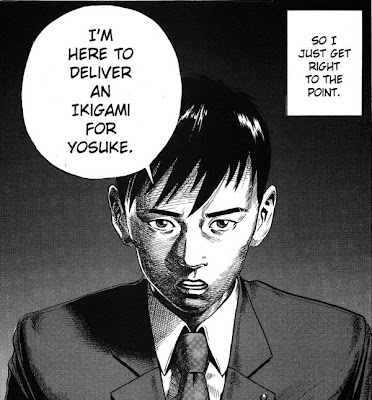 And on that tour of morbidity, our viewpoint character, of sorts, is Fujimoto, a young man who works delivering Ikigami, or "death papers" to people who are scheduled to die, giving them 24 hours notice so they can spend their last day doing whatever they feel necessary. But while he might develop into a more anchoring presence at some point, so far his main purpose seems to be to convey exposition about how the system works and shepherd the stories along to the people about to die. There are some hints that he might become more of a proactive protagonist in the future, since he's experiencing doubts about the effectiveness of the system, along with fears for his life if he ever speaks out against it.
But the real protagonists here are the victims, who get to run through the gamut of emotions that come with impending, unavoidable death and choose to react accordingly. It looks like there will be two such stories in each volume, at three chapters apiece; the first one that we encounter sees a young man who was mercilessly bullied by the popular kids at school, with them inflicting such verbal, physical, and even sexual torment on him that he ended up dropping out and suffering a mental breakdown. And now that he's picked himself up and is getting his life back together, he finds that he's going to die for no reason, prompting him to take violent revenge against his tormenters. It's a pretty dark situation, and the resulting actions he takes aren't very satisfying, either to him or to the readers. This is where the nihilism comes in; it's an ugly world full of awful things happening to people, and more death probably isn't going to help, but at least we can get some lurid entertainment out of it, right?
The promise of one nasty story after another seems exhausting, so it's a welcome change to see Mase go in the opposite direction for the second story. The victim of this tale is a street musician who was given the opportunity to make it big in the music business, but only if he left his partner behind and sang the sort of pre-fab pop that might make him famous but probably isn't very artistically satisfying. Needless to say, he jumped at the opportunity, but when he finds out that he's going to die, he regrets it, wishing that he hadn't sold out. The climax comes as he gets a chance to perform live on the radio just as his scheduled time of death is approaching, and in a kind of corny twist, his old partner is in a situation where hearing an old friend on the radio will make a difference. It's kind of contrived, but it works pretty well, giving the whole situation a heightened emotional resonance.
It's the other side of the coin from the first story. While Mase has set up a reprehensible fictional system here that would be easy to repeatedly criticize while glorying in violent results, it looks like he'll also take the chance to explore the positive side, showing why people would accept a system that oxymoronically celebrates life by killing people. He's got a pretty good story generator here, and it should be fascinating to see him explore it in future volumes.
Posted by Unknown at 7:50 PM