MoCCA 2009: I want to take comics behind the middle school and get it pregnant

I feel vitalized; my faith in comics is greater than it has ever been. Not that I was worried about the future of the medium or anything, since I don’t think anything short of worldwide apocalypse will wipe it out, but there’s nothing like being in huge room surrounded by more talent than the mind can fully comprehend to shore up one’s faith. And spending time with others that are as excited about comics as I am only increases the feeling. It’s pure sequential art euphoria.

But I’m getting ahead of myself. To fully explain: this past weekend saw the of and Cartoon Art Festival held in , and I was fortunate enough to make the trip from to be there. Held in the Lexington Avenue Armory, the show was a huge room packed with comics goodness, hundreds of cartoonists and publishers showing off their art. It was an amazing sight, and even more astonishing upon browsing the tables and seeing how high the level of quality is at a show like this. Having been to Wizard World Chicago the last two years, I’ve seen the kind of talent that congregates around the world of superheroes. Sure, there are some good artists there, but they’re diamonds in the rough; most of the space is taken by poor-to-mediocre drawings of Batman and Wolverine or hideous posters of scantily-clad superheroines. And that’s just in “artists’ alley”; don’t even get me started on the idiocy of the rest of the show floor. But MoCCA is different; it’s like the very best of the indie stuff has separated itself into its own organism, then multiplied to fill an equivalent space with greatness. I couldn’t get enough of it.

And that's good, because there was more there than I had time or energy for. I saw and talked to many creators, but missed a bunch more. It's hard to know where to start talking about it, but from a starting point, here's the pile of stuff I came home with: 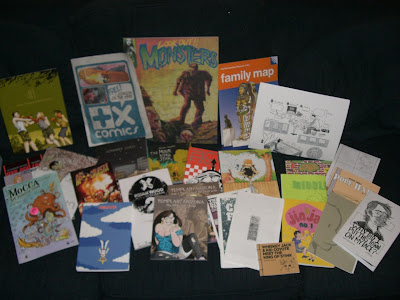 I'll be talking about a lot of that stuff over the next few days or weeks, but I do want to point out a couple items of interest. The poster/brochure in the upper right is a Kevin Huizenga strip promoting the Center for Cartoon Studies, which is doing the hard work of training the next generation of cartoonists; they're pretty awesome.

Just to the left of that is a free handout from the Metropolitan Museum of Art featuring an amazing fold-out poster (which you can see here) by John Kerschbaum that is packed full of detail and seeming to reproduce the entire contents of the museum. It's pretty incredible, and Kerschbaum suggests that you should go to the Met's site and email them to request that they sell it as a print in their gift shop. I've done so already.

Also, note the flyer for Transmission X, a great webcomics site that features work by creators like Cameron Stewart, Karl Kerschl, Michael Cho, Ramon Perez, and others. Give it a look; it's free!

Other people that I saw or talked to, mentioned as they occur to me:

John Meijas and the Paping people were pretty interesting. I probably would have spoken to Meijas more if I had realized he was the guy who did "The Teachers Edition", which I wrote about when I reviewed The Best American Comics 2008. Their anthologies are pretty awesome though, including the volume that is handmade with wood covers and bound with shoelace: 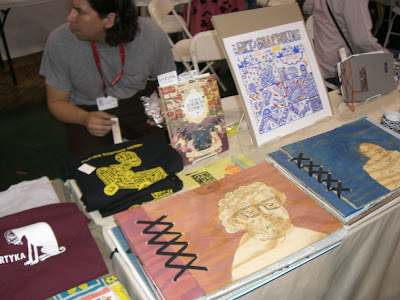 I ended up talking to Matt Weigle the most out of the group, and also Shawn Cheng (who also had a story in Best American).

I saw Becky Cloonan and Brian Wood at the Vertigo booth and got to look at the first issue of their upcoming second volume of Demo (which comes out in the fall), which I'm pretty excited about. Cloonan also has the collected Pixu book (which she worked on with Vasilis Lolos, Fabio Moon, and Gabriel Ba) coming out this fall from Dark Horse, and the preview copy of that volume she had looked great. And don't forget about her webcomic, KGB, which I mentioned yesterday!

Kevin Church and Benjamin Birdie were fun to talk to, and they had copies of their new collection of their webcomic The Rack. That's a great strip, and hopefully they'll have the book available to purchase online soon (if they do already and I missed it, sorry). you can purchase the book online here.

I was happy to meet Connor Willumsen, whom I happened across online a couple years ago and got excited about. I'm glad to report that he has only gotten better, as you can see from the art samples he posts on his blog. He had some pages from a graphic novel that he's working on (tentatively titled Everett) that were just mindblowingly good. If there's any justice in the world, this kid will be the next big thing.

That's the great thing about these conventions; stumbling on some undiscovered talent. Joshua Ray Stephens is another guy that I met, and I really regret not purchasing his book The Moth or the Flame; it looks incredible. Hopefully, I'll be able to remedy that mistake in the future.

I was also happy to meet Dean Haspiel and see his enthusiasm for the stuff going on at Act-I-Vate, especially their print anthology that's coming out this fall. They had a preview copy of the book, and it looks gorgeous, full of great work by the talents that are constantly making new comics available at the site.

And speaking of previews, Fantagraphics had a copy of their upcoming Abstract Comics, and that book also looks incredible. I'll have to seek it out when it comes out; here's an article all about it if you want to know more.

And I also missed meeting a bunch of people who were there, like Ryan Dunlavey, Lilli Carre, Jog, Sean T. Collins, Kiel Phegley, Tim Callahan, Geoff Grogan (although I did buy his book Look Out! Monsters), Brian Ralph (I wanted to buy Daybreak, but ran out of money), Michael Kupperman, Adrian Tomine, Seth, and Gabrielle Bell.

I do want to give a shout out to fellow blogger Sandy Bilius; he and I met up, browsed through a bunch of tables, and attended a panel together, and I'm pleased to report that he's a great guy, not at all stunted by any affection for Rob Liefeld.

And I also want to send enormous thanks to my generous hosts Tucker and Nina Stone, who let me crash on their couch and shepherded me around the big city; I would probably have been in way over my head without them. It was wonderful getting to spend a buch of time with online friends and finding out that they're cool and fun in real life as well.

Like I said above, it was an incredible weekend, and I don't think I could have had a better time. This is what comics conventions should be all about. I should have more posts up within the next few days, including reviews of stuff that I picked up and possibly coverage of the panels I attended. So keep reading!

Edit: I've posted photos here; don't miss the ones of Tucker bringing the karaoke house down with "Smells Like Teen Spirit".