20th Century Boys: I'm probably too young to be counted among their ranks

Elsewhere: I reviewed Dark Reign: The Sinister Spider-Man #2 over at Comics Bulletin.

Also: Lucy Knisley has returned from a trip to France, and she's serializing the comics journal that she made here. It's like French Milk, in miniature!
20th Century Boys, volume 2 and 3
By Naoki Urasawa 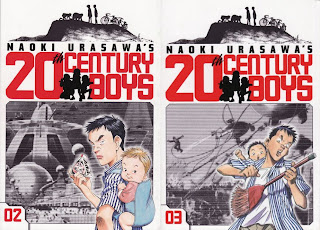 I'm finding it hard to find a whole lot to say about this series, although I'm not sure why that is. I think it might be because it's a little bit different from, and possibly more expansive than the other Naoki Urasawa series that I expended so much language on, Monster. After the introductions of the first volume, Urasawa is spending time piling on the creepiness and sense of dread, as more weird details about the "Friend" cult are revealed, and occurrences keep happening that match up with the story that Kenji and friends made up about a league of evil attacking the world so they could be the heroes that saved everybody.
That seems the be the driving hook of the story at this point, as Kenji tries to remember the kind of stuff that he and his pals talked about as kids, or who might have been involved. Several new characters get introduced, including Yukiji, a girl who was the toughest kid in school and the only one to stand up against the bullies, and a weird kid who always wore a mask and didn't have any friends (at this point, signs are pointing toward him being Friend, the leader of the cult, but I'm sure there will be more twists to come). But the compelling theme here seems to be the way childhood dreams kind of melt away as we grow up. Kenji and his friends have moved on, starting families or taking over family businesses, but Friend seems hung up on their childhood fantasies, to the point that he's willing to kill and manipulate thousands of people to make them come true. And to what end? All his actions seem to be in the pursuit of evil; is he trying to bring about the heroism that the boys aspired to?
But the other notable quality is that the childish stories seem pretty dumb when viewed through adult eyes; only somebody who doesn't have a very good grasp of reality would want them to come true, right? Kenji seems to be the closest to Friend in terms of idealism, but even he matured in his fantasies, going from wanting to be a superhero to trying to become a rock star. But even that eventually faded, and he became focused on his family, ending up in charge of their liquor store and his niece Kanna. But the spark hasn't fully faded; one of the most exciting moments in these two volumes comes when he discovers the guitar that his sister bought him, then plugs it in and rocks out, waking up the whole neighborhood: 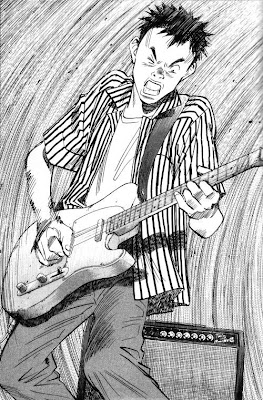 I expect more of this background will eventually be revealed, so we'll surely get to see what happened as the kids all grew up and drifted away from their youthful ideas and ideals. And given what we see here, it should be a great experience. Urasawa gives us plenty of classic moments, including a pair of chapters that features one of his signature techniques, in which he quickly introduces readers to a new minor character and immediately conveys their emotional state and situation, getting us interested in them without it feeling like he's dumping information to us. I'm always amazed when he does this, and this instance is better still, since he uses it to hide what could have been a dreary infodump about the police investigation into the Friend cult. We see an officer who is near retirement passing the information about the case on to a junior detective, but their conversation keeps getting interrupted by phone calls from his family, as they try to convince him to come to his grandson's birthday party. He explains that he doesn't get along with his daughter because he was so involved with work that he never had time for family. Then his daughter calls him and asks him to come, and the subtle effectiveness of his reaction is astonishing: 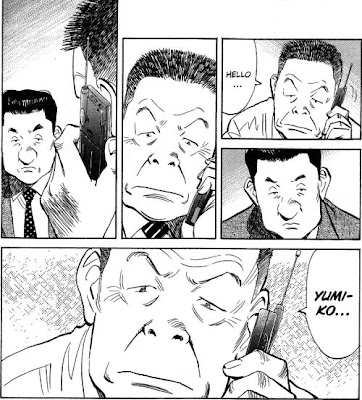 It's amazing that Urasawa can convey such a small shift, with his features softening and his eyes opening ever so slightly, yet make it devastatingly moving. Moments like this are why he is considered a master.
And I don't want to dwell on the shocking ending to the detective's story, but it's enough to make you cry. Instead, I'll mention that in addition to subtlely expositing information, the chapter mirrors Kenji's own conflict, as at the same time, Yukiji is trying to get him to help with a survivor's group that is trying to find out what is going on with their relatives who have been caught up in the cult. But Kenji is caught up in trying to manage his family's store and take care of his niece; it's the opposite of the detective's dilemma, but what he's missing out on are world-shaking events.
But when Kenji does start trying to figure out what is going on, Urasawa really dials up the menacing creepiness. One scene sees Kenji infiltrate a concert that the cult is putting on, and it's just bizarre, with comedians that don't really make sense but still cause the crowd to burst out into gales of laughter, and a rock band that just doesn't seem to be doing things right, even though everyone seems to think they're awesome. It's all just slightly off, and the fact that Kenji is the only one that can recognize that among thousands is just wierd and strange. And when Friend himself shows up, things get taken to a whole new level.
But then the really intense scene comes, as a group of cult members, who have been informed that Kanna is Friend's daughter (which might or might not be true), decide to take her away from Kenji's family and deliver her to Friend. It's a perfectly-paced scene, as we learn what their plan is as they start to congregate in the store, but Kenji's mother is blissfully unaware and happy to have all the business (Kenji is elsewhere, having found out about the plan and racing to get there as soon as he can). The images of the creepy, shifty-eyed cultists are as scary as hell: 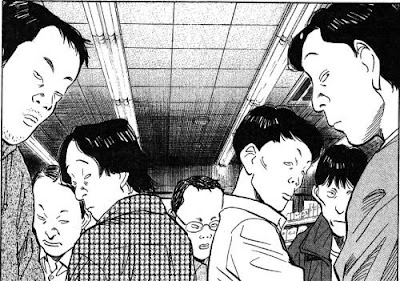 It's the kind of thing that would have viewers yelling at the characters on the screen if this were a movie; Urasawa is just amazingly good at ratcheting up the tension, and then delivering on the promised action.
And there's plenty more going on in these volumes, including details about Kenji's older sister, who took such good care of him as a kid, and then abruptly disappeared, leaving Kanna in his and their mother's care. Was she kidnapped by the cult due to her knowledge of microbiology (that is, bioweapons)? And the developing relationship between Kenji and Yukiji is one to watch as well; after a childhood incident in which he came to her aid, she seems to think of him as a hero, and he's not exactly living up to her expectations. She's a nice character too, abrasive and direct, and it's nice to see her play off the others. And don't forget the various supernatural hints, including a psychic homeless man who seems to be able to tell people's future. And there's probably more that doesn't immediately spring to mind.
Yes, there's a heck of a lot going on in this manga, which makes for a page-turning read that leaves you desperately wanting to find out what happens next after every chapter. And the beautiful thing is, it's all up in the air; who knows what Urasawa is up to and what he'll spring on the reader at any time. It's virtuoso storytelling, excelling on every level, from art, to dialogue, to pacing, to character development. Monster seemed like it would be impossible to top, but Urasawa might just be on his way to doing so here.
Posted by Unknown at 9:30 PM