News: Here's the big story that I've seen out of San Diego so far: Jeff Smith is going to be doing more Bone comics! It'll be stuff along the lines of legends told by Smiley Bone's cub scouts (or whatever they were called) and various stories from within the valley, and Smith won't be writing (although I'm sure they'll be from his stories), just doing the art. Tom Sniegoski will script, which is cool, because his previous Bone comic, Stupid, Stupid Rat Tails, was great. I'm excited about this one.
Other linkiness: This "animated audition" for an adaptation of Little Nemo in Slumberland by Studio Ghibli is breathtaking. Makes you wonder what could have been.
Brian Clevinger and Scott Wegener, the creative team behind Atomic Robo, are putting together a live-action web series called Emerson Wild: Monster Hunter. It looks pretty cool; that should be one to watch when it comes out.
Hey, what the hell is this? I just stumbled across it on Amazon, maybe it was an SDCC announcement I hadn't heard about. It's a new graphic novel by Gilbert Hernandez called The High, Soft Lisp, and it's apparently the story of his character Fritz. Cool.
Okay, real content:
Having started reading the third volume of Jack Kirby's Fourth World Omnibus, that means it's time for another not-exactly-daily round of Fourth World Panels! Here's the first one, from Forever People #7: 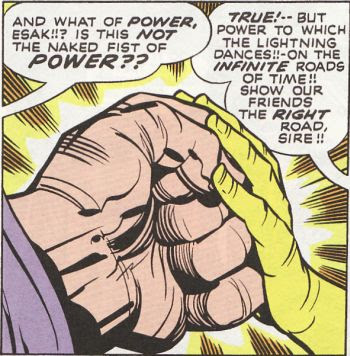 I love the contrast in that panel between the sheer power of Highfather's fist and the gentleness of the child who is trying to convince him to save the Forever People (who were Omega Beamed by Darkseid in the last issue and are now scattered throughout the past). Knowing Kirby's Jewish heritage, it seems like there's an Old Testament influence here, as in the various prophets who managed to calm down God when he was ready to go on a divine murder spree. I love this stuff, the way Kirby was using a sort of mythological style of dialogue and storytelling, with ultra-powerful characters deciding everyone's fate. Hell yeah.
And since I can never limit myself to one panel per issue, here are some more, in a couple scenes that fall under the heading of Don't Fuck With a New God: 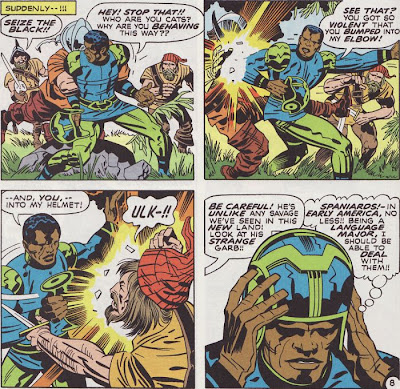 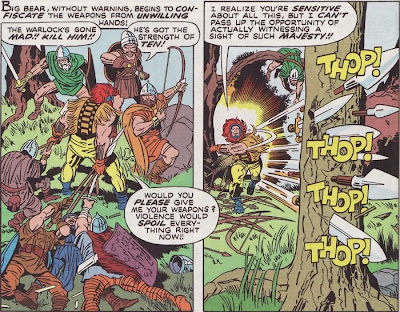 There's plenty of other great moments, including a nod toward Arthurian legend that might have got Kirby on the road to The Demon, the cool scene from which I took this post's title, and a bonus two-pager that sees an awesome New Genesis battle horse named Thunderer. Also, having just read Final Crisis, I recognize why Grant Morrison had to have the Sonny Sumo in that story make a comment about not being the "real" Sonny Sumo, coming instead from a parallel universe. You've gotta love the respect for some obscure, nearly forty-year-old continuity.
Bonus! Kirby Lincoln:

Next up: "The Pact!" I can't wait! Or not. There's a Jimmy Olson first. Damn it Kirby, keeping me in suspense!
Posted by Unknown at 10:45 PM