"If I am Izaya the Inheritor--what is my inheritance!?"

Holy shit, the source of today's Fourth World panel, New Gods #7, is absolutely amazing, full of Kirby's straight-up mythmaking. It's an origin story of sorts, for both Orion and Mister Miracle, but also for Highfather and Darkseid, to an extent. We learn how Darkseid came to power, of the devastating war between New Genesis and Apokolips, and of the pact that gave the story its title, in which the children of the two planets' leaders were swapped in an attempt to provide peace. Kirby just blows readers away with his depiction of the cosmic war, but the key moment, I think, is the one that gives the day's panel: 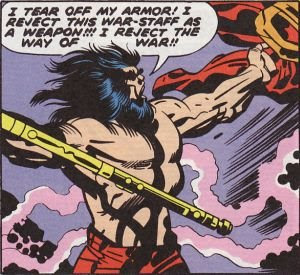 Although, to cheat, I'll also include the page surrounding it, since it lends more weight to the scene: 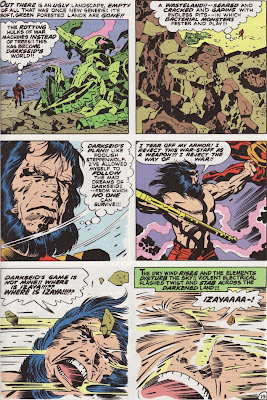 That's Izaya, the leader of New Genesis, despairing at the destruction the war has wrought. It's powerful stuff, but it wouldn't be nearly so moving if we hadn't seen the opening splash page of the story: 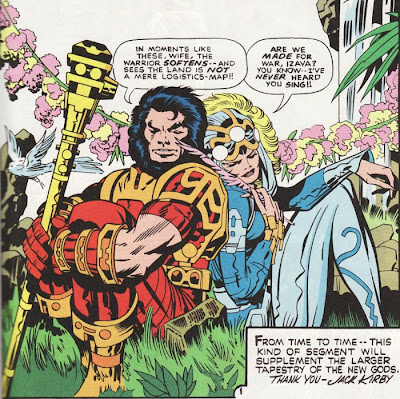 He may be a warrior, but he is content to relish in the beauty of his surroundings and the love of his wife. But manipulator Darkseid, who has not yet become ruler of Apokalips, isn't so happy, and he manages to move all the pieces into place to allow him to rise to power. It's scary to watch, since he seems to lurk in the background until he's able to quietly rise to the throne after arranging for the deaths of his uncle Steppenwolf and his hideous mother Heggra.
The whole thing is fascinating to watch, with Kirby believably painting a cosmic, god-scale war, in which suns are harnessed to fire beams of planet-destroying energy, and machines blow up entire stars. There's one moment that seems quite noteworthy, coming from a World War II vet: 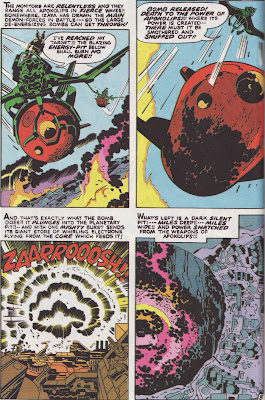 But unlike the atom bomb, this destruction only signals the beginning of an ever-escalating war, one that can't be ended by more and more violence, but by peaceful agreements. And even those are destined to fail, when a schemer like Darkseid is involved.
Like I said, it's fascinating to see Kirby's wartime experiences writ large, making violence and death a thing of galactic spectacle rather than something that we read about in newspapers after they happen on the other side of the globe. And that first scene above, in which Izaya starts to question his actions and his very being, gives me chills; it's like Kirby is trying to make man himself examine his own violent ways.
And on the level of "just plain awesome", there's plenty of that in this issue, with the following bit of Kirbytech being especially striking: 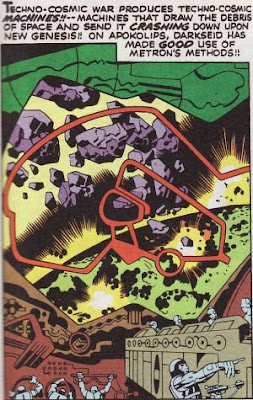 I love the way he throws seemingly random details into scenes; why would a giant viewscreen have a crazy shape like that on it? It seems to be Kirby's way of making it be beyond human understanding; we can't even begin to fathom the workings of this cosmic technology. And then there's stuff like these dragon tanks, and the "destructi-poles" that are used to fight them: 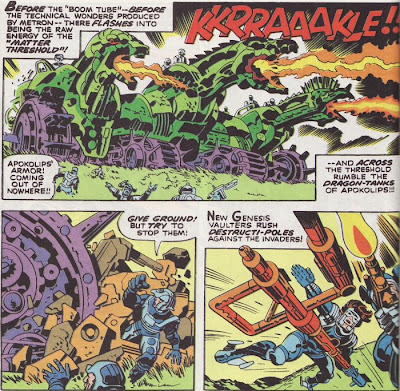 And Apokoliptian warriors (including Steppenwolf, in his goofy pointed hat) charging into battle riding giant dogs: 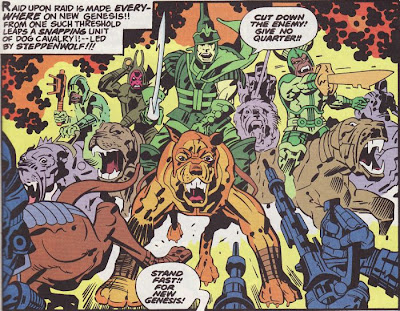 That's definitely not anything Grant Morrison dreamed up; Kirby was there first!
God, I'm loving this. Next up: Mister Miracle on Apokolips!
Posted by Unknown at 3:50 PM