Links: Abhay Khosla's Bram Stoker's Dracula. That should be all the information you need to know to click on that link.

Vertigo has a glimpse of Matt Kindt's upcoming graphic novel Revolver. I can't wait for that one.
Cullen Bunn and Brian Hurtt's new series, The 6th Gun, is looking pretty awesome. Robot 6 has a few preview images, and Bunn posted one more.
Jog caught the only manga announcement of much interest out of SDCC: CMX is publishing Usamaru Furuya's 51 Ways to Save Her. I bet that will be good.
And here's the long-awaited look at the end of one of my all-time faves. All the usual qualifiers apply, including the fact that I'm ridiculously fannish about this series and probably not capable of being very objective, and also that you should expect SPOILERS, of course.
100 Bullets, volume 13: Wilt
Written by Brian Azzarello
Art by Eduardo Risso 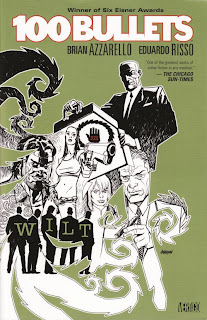 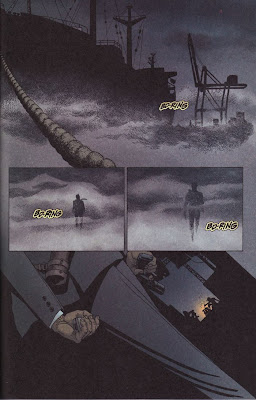 Or a striking depiction of flaming death: 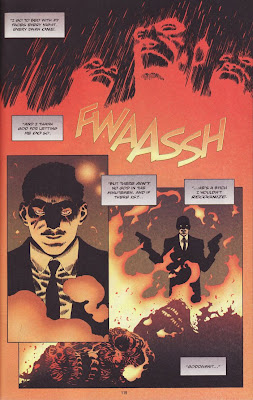 And action scenes are always exciting, often using innovative techniques to impart information, like the way he places the viewing angle high above the street here, foregrounding the bomb that is about to be set off: 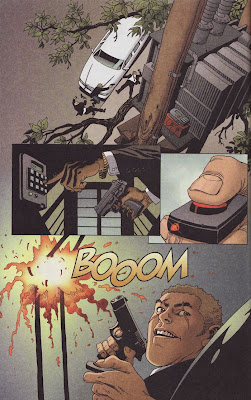 And the emotion is always clear and readable; I especially liked this scene, in which Graves has discovered that the man who made his "game" possible has been killed: 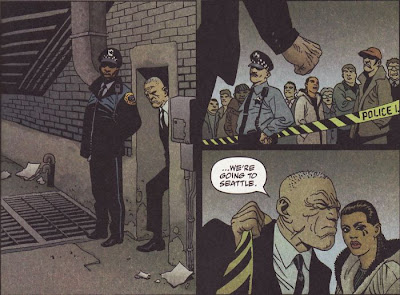 You can read the anger written on his face like a neon sign. And the violence! Azzarello comes up with some pretty awful, nasty stuff in these stories, and Risso never backs down when depicting it. Some of the bits that I found most effective included Mr. Slaughter blowing a guy's leg off with a shotgun: 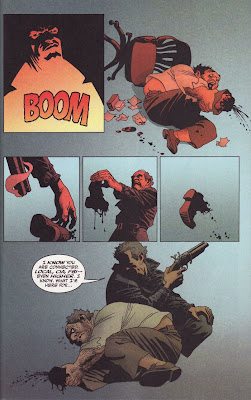 Remi's hands getting blown off: 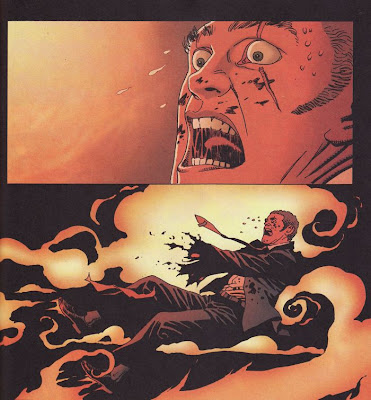 And Benito suddenly shooting Lono in the face: 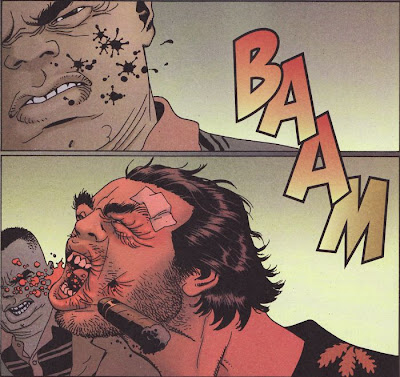 Those are definitely not the only examples of blood and mayhem in the book, and Risso really renders the gory fuck out of each and every one of them, often making them sudden and unexpected, like a slap in the face. It's pretty goddamn masterful work.
Yes, I can't say enough good things about this series, and this ending, which just blew my mind with how satisfying it was, considering the complexity of everything that had come before. Azzarello and Risso had a lot to live up to here, and they did not disappoint. I'm still not sure if there was much going on here in the way of a deeper meaning (greed and lust for power are bad? Power leads to corruption? Placing your life in the hands of someone else, even if they seem trustworthy, might turn out to be a bad idea?), but the fact that the story was so rich and compelling will leave me considering it for much longer than most other books I read. Yes, it's great comics that I can't lavish enough praise on, and I'm sure I'll be able to continue to pull out the various volumes and enjoy them even more in the years to come. I can't think of much higher praise than that.
Posted by Unknown at 11:00 PM