Far Arden: Not too far, thankfully

Links: I might have to go to this horror-themed gallery show the next time I'm in Portland. Tom Neely (recreating classic horror comics covers) and Hellen Jo (drawing freaky Asian ghosts and monsters) have some images of their included works.
David Brothers posted the anime version of Osamu Tezuka's "The Greatest Robot in the World", the story that Naoki Urasawa's Pluto is based on. I still haven't read the original manga story, but this looks like a good, free alternative.
I was going to talk about stuff I got at Wizard Chicago, but this has to go back to the library, so I gotta write about it:
Far Arden
By Kevin Cannon 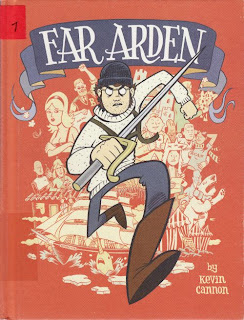 Wow, now this was a treat. With this thick little brick of a book, Kevin Cannon has seemingly come out of nowhere and leapt into the ranks of young creators to keep an eye on. Sure, he was around already, collaborating with his not-brother Zander and Jim Ottaviani on various educational comics, but here he steps out on his own, and does it assuredly, demonstrating a great grasp of character and a talent for fast-moving, exciting, funny storytelling. Who knew he had it in him?
In Far Arden (which originally started as a dare, with Cannon attempting to complete one 24-hour comic chapter each month for a year, but that only lasted for four chapters), Cannon builds a wonderfully-detailed world in the North Canadian Arctic, populating it with explorers and fishermen, not to mention a traveling circus and a university. Our hero, the grizzled old sailor Army Shanks, gets drawn into a crazy adventure when he attempts to steal back his ship, the Areopagitica, from some enemies, and use it to finally set out to reach the fabled lost island of the title, which is supposed to be a tropical paradise heated by volcanic vents. Along the way, he ends up taking on an orphan sidekick, reuniting with an old flame, recalling friendships that had fallen by the wayside, getting involved in politics, and both alienating allies and finally attaining long-held goals. That might seem like a lot to fit into one book, but it's all in there and more, and it's a delight to be along for the ride.
As with so many enjoyable works of fiction, the real power here is not in the wild action or goofy jokes, but the characterization. A deep cast of characters (just look at that packed cover!) springs up around Army pretty quickly, including an orphan who seems to randomly stumble into the story early on but turns out to be connected to several others, a couple of college students who might or might not have devious motives for tagging along, and a fractured group of Army's old pals, all of whom have some motive for finding Far Arden. They all get their moments to shine in the story, and we learn about their various backstories and connections, really bringing the fantastical world to life.
And that helps, because it's a pretty silly, unbelievable setting, with everything taking place far north of any realistically habitable land, plenty of silly feats of action, and a cartoony art style that exaggerates movements, giving characters elongated limbs and wacky, funny movements: 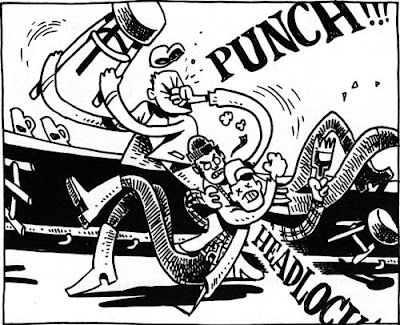 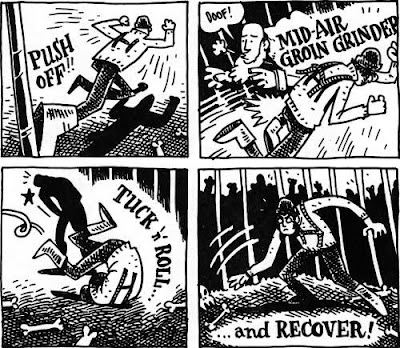 Not to mention things like the way Army's pipe seems to float next to his head while he's smoking, or the manga-style streams of tears that often flow down characters' faces. It all makes for a rollicking good time, and Cannon's funny dialogue and great sense of timing turns it all into a great ride. And the art style, which has a good, textured use of dense cross-hatched shading, works wonderfully to bring the barren land- and seascape to life, often leading to some nicely wistful images: 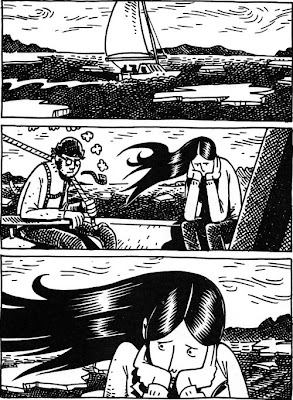 But the fascinating thing is the way the goofy adventure gradually morphs into something more serious, a meditation on friendships that grow apart and turn against each other as time goes on, on the way that people can drift apart and end up at odds with those they once cared about, on how romantic relationships can cause other relationships to suffer. Distant, probably hopeless dreams can provide sustenance for a time, but when one becomes obsessive, it can lead to tragedy and alienation, turning the pursuit of happiness into something that obliterates the happiness that already exists. Heavy stuff? Probably more so than is in the actual book, but it's fascinating the way that Cannon takes what starts out as a goofy romp and weaves serious threads in until he gets to a devastatingly emotional conclusion.
And that's what makes this book so special. Cannon gives us an enjoyable good time, but sneaks in some weighty content in a way that readers don't see it coming. It's effective stuff, and an announcement of an exciting talent to the comics scene. It's enough to make one giddy at the prospects of what might come next, although as we've learned from Shanks, it's best to temper expectations and be happy what we have. And when what we have is this good, we shouldn't complain.
Posted by Unknown at 8:30 PM