Pamphleteering, of the harder-to-obtain variety

Elsewhere:  in the past week or so, I reviewed Neil Young's Greendale and Billy Hazelnuts and the Crazy Bird for IndiePulp, so read those if you can't get enough of me.

Link: this posthumous comic by Harvey Pekar is pretty poignant.

And here are reviews of stuff you don't necessarily find lying around your local comic shop: 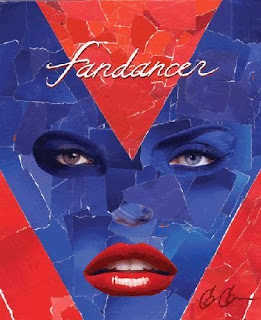 There are some comics that I don't understand but still find pretty fascinating, and this is a prime example.  As with Look Out!! Monsters, Geoff Grogan is doing some really interesting combinations of styles, contrasting deep subjects with simplistic imagery.  Here, the story (as it were) sees two superwomen fighting as they fall out of the sky, followed by an extended bit in which a naked woman tries to survive alone in a wilderness before meeting a man who first aids her, then turns into some sort of demon/goat monster that rapes her, impregnates her, and (apparently) steals her unborn child.  All this is tightly drawn and precisely colored with what appear to be crayons, aside from an opening page that uses Grogan's "torn up newspaper" backgrounds.  Then the story takes a strange turn, becoming a collage comic that combines old fashion photographs; trippy images of space, the moon, stars, and desert landscapes; characters and cars from old romance comics; and word balloons and captions that alternate between those romance comics and Silver Age superhero comics.  It all seems to be an attempt to combine these parts into a narrative of cosmic/magical revenge by the woman against her attacker, perhaps as an insanity-induced fantasy.  It's striking and weird, requiring a lot of work from the reader to put everything together and interpret what Grogan is going for.  What that goal is exactly is pretty indistinct, but it might be an attempt to demonstrate the emotional pain and chaos that comes from victimhood, as the woman (a sort of archetypical character, with nothing to define her beyond her gender) first imagines her attacker/abuser to be monstrous, then herself to be a magically-powered avenger.  But she's still wrapped up in emotional turmoil, trying to understand what happened, so her thoughts of heroic wish-fulfillment ("You already possess the means to defeat your foes!  Power is not the only answer!  Events have occurred which require a key...and wisdom is that key!") get mixed up with thoughts of love, acceptance, and rejection ("I can't live without him! I--can't--give up!").  Does that make sense?  I can barely follow it, so I'm really not sure if it's what Grogan was trying to do, but it's still something that draws the reader in, a gorgeous object that makes one want to understand it.  Grogan's comics are really like nothing else out there, and their large size and eye-catching artwork really makes them something to behold.  If you're interested in stretching your mind a little bit and being wowed by something totally unique, do check it out.
----- 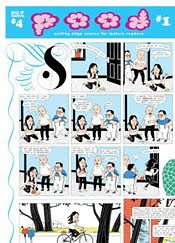 It might have been Kramers Ergot #7, or maybe it was Wednesday Comics, but really big comics seem to be a trend these days, and it's neat to see different creators trying their hand at coming up with ways to use huge pages.  Newsprint is a good way to present them too, making it seem like the comics section of a Sunday newspaper and delivering a good amount of content without being too expensive.  This latest entry in the burgeoning "medium genre" is like an independent version of Wednesday Comics, offering creators both known and unknown a chance to experiment with big layouts and participate in a cool project.  And like any anthology, it has its ups and downs, but there's plenty of good art and neat ideas on hand to make the experience an overall positive.

On the down side:  Kevin Mutch's "Super Love People" is an odd bit of surreality in which a deformed naked blue woman wanders a desert and gets eaten by a rock monster; I don't get it.  "Nevertheless Alive", by Henrik Rehr is an abstract comic, a mass of non-representational imagery covering a whole page with boxes drawn here and there to highlight a close-up of the mass of abstraction; it's not terrible, but abstract stuff doesn't necessarily fit in with everything else.  Mark Sunshine's "Work Projection Administration" is a bunch of small, nonsensical figures cluttered all over a page; there's a ton of text, but damned if I can figure out what any of it means.

On the up side, everything else is at least readable, if not great.  Sara Edward-Corbett's front-page strip "Babysitters" makes for a good "face" for the project, seeing a bunch of panels clustered around the winding image of a snake and following the goofy adventures of various kids plotting against each other in a scheme to make money at the titular job.  In the "cool layout" department, Tobias Tak's "Don't Forget to Remember Not to Forget" uses a cool circular layout to follow a character wandering through a symbolic dreamscape, and Bishakh Som's "Sunita" takes a cool futuristic building and weaves a story about its inhabitants through inset images, text boxes, and arrows.  Taking a more straightforward approach, "Cloverleaf", by Adam McGovern and Paolo Leandri, is an interesting sort of ghost story of a paved-over neighborhood done in a Silver Age style.  Jim Rugg and Brian Maruca's "USApe" is a funny spoof of an over-the-top pro-America bit of propaganda, done in a more simple, cartoony style than Rugg usually uses.  Connor Willumsen's "Fiddle Song" is a Western tale of revenge done in a series of small-ish panels cascading down the page, managing to be dynamic without featuring much motion and demonstrate emptiness without using really large panels.  And Joe Infurnari uses a cool technique in "Rammy & Soupy in: Dreams of Flight" in which a story about a couple of train-riding hobos' conversation is interrupted by a colorful memory that bursts through the page.

It's a pretty great package overall, and you can really see the artists flexing their creative muscles to come up with something cool.  Hopefully this will be an ongoing series, and we'll get to see even more development along those lines.
----- 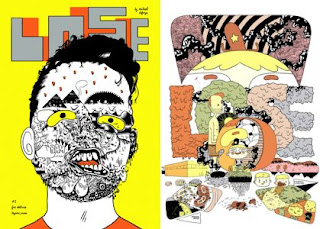 Wow, no wonder Michael DeForge is a rising talent.  These two issues of his personal "do whatever I feel like" series are quite impressive, packed full of weird, detailed imagery, such that it's only a matter of time before he's a recognizable figure in the independent comics community.  He has a flair for cute cartooniness, but also grotesquerie, especially making things look wet and slimy, dripping with sweat, ooze, and mucous. It's nightmarish stuff, but fascinating, the kind of pictures that really stick in one's head, with well-defined characters and interesting, if truncated, plots to boot.

The bulk of the first issue sees a fairy creature named Nesbit cast into hell for mouthing off to his creator (a gross, tentacled monster), leading to various adventures with monstrous creeps as he tries to contact the person in charge and explain that he's only there by mistake.  There are also cameos by all manner of recognizable comics and animation characters, from Bullwinkle and Astro Boy to Jimbo and Sof' Boy, adding a bit of self-commentary about the life of a cartoonist to the mix.  There are also a few shorter strips, like the gag-panel series "Dogs in College" ("Lately, I don't even know if I enjoy walks"), and a "group of teenage assholes" take on superheroes in "Young Green Lantern".  It's really cool stuff, an assault on the senses that leaves you wanting more.

The second issue calms down a bit, spending most of its pages on a couple of simpler stories, one of which is a creepy-as-hell horror tale about a kid who makes a pet of a giant spider/maggot that carries around a decaying horse head.  It's very gross, but also engrossing (see what I did there?).  The other bit is a sequel/continuation/alternate version of "Cave Adventure", a strip that DeForge did for Top Shelf 2.0.  It seems like a spoof of dungeon-crawling adventures, but it manages to work in some uncomfortable business involving violence and cannibalism.  It's grotesque, striking stuff, tons of fun.

These are some highly enjoyable comics, hurt only by their mostly unfinished nature; it's like we're only seeing fragments of what DeForge is capable of.  Hopefully he'll get a chance to do a longer graphic novel or some full-length stories in some anthology or other, but I'll try to get my hands on whatever he does, because this is some great material, even if it does keep me up at night.
----- Colleen Frakes is another rising star, able to weave compelling stories in an effective, cartoony style.  These latest issues of her minicomics series are enjoyable, although #8, "Revenge!", is a pretty simple little story about a man and a woman, both super-spies, who are trying to kill each other.  #9 is more substantial, containing the first part of Frakes' latest long-form work, "Basket Ogress", which looks to be a neat story about stories.  Two girls at a sleepover tell each other ghost stories, but when one relates the tale of the Basket Ogress, a giant woman carrying a basket made of snakes who catches and eats bad kids, the ogress herself shows up, smashes a hole in the house, and carries off one of the girls.  The girl left behind sets out on a quest to save her friend (accompanied by her suddenly-talking cat), who manages to stall getting eaten by telling more stories to the ogress, all seeming to come from (or at least are inspired by) Native American mythology.  It ends on a cliffhanger, which is enough whet appetites for the upcoming tenth issue, but what's here is quite exemplary, full of simply-defined characters that come to life through Frakes' gorgeous brushwork and some really neat details, like the basket woven of snakes, the empty eyes of the ogress, and the inclusion of Native American-style artwork in the stories.  I can't wait to read more.

There's also a short, wordless story called "The Hunt", which was inspired by Frank Frazetta, and it follows a jungle girl as she chases a tiger through the jungle, then comes across a book and imagines herself in other types of stories, before continuing with her regular activities (i.e. running from the tiger when it's his turn to hunt her).  It's a cute little series of pages, notable especially for the way a female cartoonists approaches a sexy, scantily-clad female figure, giving her wide hips and normal-sized breasts, and focusing on athleticism rather than provocative poses.

So, yes, Frakes is another exciting talent to watch rise, although she has already established a track record of complete stories (see my review of her book Tragic Relief here).  She's still constantly getting better though, and her love of making comics is obvious; I'm excited to see what else she can do.
-----

Hmm, that was long.  Well, more minicomics to come soon, along with whatever I pick up at Wizard World Chicago this weekend (yes, it turns out I'm going), and continuing reviews for IndiePulp.  I'm a writin' machine!
Posted by Unknown at 10:56 PM