Collection catchup: Gods and suicides and lesbians, oh my

Elsewhere: I reviewed the second volume of Demo at IndiePulp; it's really good (and hopefully the review isn't bad either).

Links:  This Sophia Wiedeman (The Deformitory) comic at Top Shelf 2.0 is quite good.

This partly animated comic by Vincent Giard is also pretty great, a cool example of the way animation can be used effectively in comics rather than as a distraction.  I've got to check out more of this guy's work.

which is available in English for the Kindle (or really any platform, since Kindle books can be read on Iphone, PC, etc.).  It got attention because Shintaro Kago has some comics in it, which makes it his first officially available English work, but from what I understand, it's only a few gag strips, but he'll have a longer-format story in the second issue.  I dunno, maybe I'll get a subscription or something. 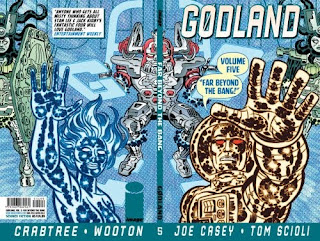 Some comics hit my buttons just right that I love them intensely while having trouble expressing the reasons for doing so beyond "Wow, that's awesome!"  The Jack Kirby riff that Joe Casey and Tom Scioli do here is a perpetual winner, and they manage to nail the feel of the King's cosmic bombast perfectly, with the shouted proclamations and the world/galaxy/universe-shaking implications of the fights made perfectly clear.  They keep things going at a breakneck pace, with hero Adam Archer dragged into interstellar cosmic battle with forces he barely understands, while back on Earth the villainous Friedrich Nickelhead launches a political takeover for the super-criminal set.  There's some weird social/political commentary going on, but Casey never sits still long enough to make it seem didactic, and the gigantic action and bizarre character designs by Scioli constantly dazzle the eye and grab hold of the mind.  It's the almost-too-big-to-comprehend Kirby-style godly morality that I dig most though, as in a scene in which an evil being prepares to influence the evolution of two warring species on some distant planet, declaring "Eventualism now!", before being attacked by two other baroquely attired space-farers who declare, "We bring forth the anti-pillage! Prepare to defend your religion!" before being sent 12,000 years into the future (taking them to our present) to face the results of the evolutionary shepherding that was inflicted on the winners of the species war.  It's totally nuts, and also totally awesome.  I can't get enough of this madness; it's the closest anyone has come to recreating Kirby, and it comes from understanding that you can't just keep trotting out the New Gods or the Fantastic Four and running them through the same old adventures; you've got to push the limits, explore new frontiers, come up with your own exciting ideas.  That's exactly what Casey and Scioli are doing here, and it's glorious to behold.  I wish it would never end.
-----

The second volume of a manga series is often the place where the series really gels, and that seems to be the case here.  The first book was mostly focused on introducing the cast, including the ostensible main character, a suicidal teacher who exudes despair and hopelessness, trying to convince everyone he meets of the pointlessness of life.  The focus often turns to his wacky students though, who include his opposite number, a girl who is so optimistic that she can find a bright side to everything, as well as an ultra-precise neat freak, a shut-in, a boyfriend-obsessed stalker, a panty-flashing immigrant who threatens to sue everyone for sexual harassment, a refugee who barely speaks Japanese, and a girl who tries to stand out, but ends up being completely ordinary.  Having spent the first volume introducing all these goofballs, mangaka Koji Kumeta, who is apparently well-known as a satirist, can now just have goofy stuff happen and see how everyone reacts.  Sometimes a theme is established early on, like when Zetsubou-Sensei refuses to list grades on students' report cards, since life is better when you're ignorant of bad news, or when the Tanabata Festival, in which people write down wishes and hang them from trees, sees everyone sharing their wishes (and culminating in the teacher hanging himself from a tree).  This lets Kumeta riff on a theme, throwing out jokes left and right, having each character do something goofy that fits their personality, and always filling at least one panel with a list of examples of whatever the topic of the day is, usually making obscure references to Japanese culture that have to be explained in the footnotes.  Other times, something bizarre happens, making for a bunch of strange jokes, like a chapter in which a character claiming to be Admiral Matthew Perry (who forcibly opened Japan up to trade with the United States in 1854) shows up and goes around opening everything he sees, including a boy's zipper, the school's pool, and (in a failed attempt) Zetsubou-Sensei's heart.  Another story sees everyone travel back to the teacher's hometown, where his family apparently has an arranged-marriage custom in which anyone who looks into someone else's eyes has to marry them, which leads to all sorts of hijinx.  It's a totally ridiculous comic, but it's frequently really funny, even in the comedy that actually translates.  And that's a qualifier that must be made, since so many of the jokes are based on obscurities of Japanese language and culture, or pop culture and events that nobody on this side of the Pacific knows much about.  The extensive translator's notes do their best to explain things, but even with that resource, one gets the feeling that a lot of material is going right over their head.  But that's okay, since it just seems surreal and strange, and what does work, like the running jokes about things like a line of stalkers or a balding student that everyone ignores, is often laugh-out-loud funny.  It's that brand of odd, deadpan Japanese humor that you see in four-panel strips and the like, mixed with the loud proclamations and elaborate setups of other manga, ending up being a delightfully quirky collection of goofiness that makes just enough sense to be enjoyable.
-----

I'm just about the last person on the internet to say this, but this is a pretty damn good comic.  If more superhero books were like this one, the genre wouldn't be a tiresome slog of soap opera plot developments and gratuitous violence.  This is a pretty simple deal about a crime fighter who stops a city-threatening scheme while balancing a private life and discovering a connection to a villain, while making some nods to a larger continuity that seems interesting enough to seek out more information or ignore as suits your purposes.  There's also an origin flashback and hints toward future plots that may or may not get around to happening, but that doesn't matter, because as an introduction to the character, this collected version works really well, telling a rousing story and quickly and memorably defining the characters.  It's really solid storytelling, although I must say that my favorite moment is when a fight between Batwoman and her arch-nemesis, a crazy lady who only speaks in quotes from Alice in Wonderland, is interrupted by a bunch of beast-men that just come rampaging through and start tearing into everybody.  It ends up being explained, but when it happens, it's a crazy "what the fuck?" moment, the kind of thing that can only happen in superhero comics.

But of course, the thing to talk about here is the art, by best-of-his-generation artist J.H. Williams III.  Without him, this would be an above-average exercise in Batman emulation, but he raises it to the level of the sublime, giving people realistic human motions and expressions and filling pages with dazzling layouts that propel the action excitingly across the page while highlighting the heightened-reality nature of superheroics with an art deco flair.  The great thing about it is that he does all this, encapsulating small actions in lightning-bolt-shaped panels, tilting frames and enclosing them in bat-themed shapes, turning panel borders into curlicued swirls of psychedelia when Batwoman is dosed with a hallucinogen, while still making all the action and movement perfectly clear.  During the flashback/origin story, he manages to transform his art into an imitation of David Mazzuchielli's work on Batman: Year One, but as the story progresses toward the present, it subtly metamorphoses into Williams' style, with a bit of Tim Sale or Sean Phillips.  It's pretty gorgeous work, worth all the acclaim it's received.  If the story ever gets finished, I'll try to read it as well, which is more than I can say for most Batman-related nonsense.
-----

Cinderella: From Fabletown with Love
Written by Chris Roberson
Art by Shawn McManus 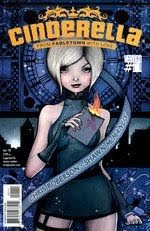 The Fables franchise must be a tough one to get right, since what seems like a fairly easy story to handle (Cinderella as a spy, working with Aladdin to uncover a magical threat to the "mundane" world) comes off as fairly rote here, with little in the way of suspense or surprise, no real action to write home about, and some especially tiresome attempts to smoosh together fairy tale stuff with the real world.  Maybe it's the first-person narration, which constantly hangs over the proceedings, working in as many fairy tale references as possible, without much wit or humor.  It could be the fast-moving plot, which never sits still long enough to gather any sense of import, or the occasional shoehorning of a dumb moral into things.  The tiresome subplot about Cinderella's shoe-store employee screwing things up by selling magical shoes (like the ones from that fairy tale, you know, the one with the shoes that never stopped dancing) certainly doesn't help.  Whatever the case, writer Chris Roberson just doesn't have the feel for the Fables world that Bill Willingham and Matt Sturges do, as if he's managing to take things both too seriously and not seriously enough.  Artist Shawn McManus does his best to make it work though, turning his style into a reasonable facsimile of Mark Buckingham's distinctive work on the main Fables title, with some nice, thick lines, big expressions, and nicely anthropomorphic animals and monsters.  If it wasn't for him, this would probably be eminently skippable, but as it is, it's worth a look for Fables completists, but far, far from essential.
Posted by Unknown at 10:50 PM