One link: HBO has a comic by Jonathan Ames and Dean Haspiel called The Birth of Super Ray available for free download as a promotion for their show Bored to Death.  Looks good; I always enjoy me some Haspiel.

Is there much to say about this final volume in one of the best comics series of the 21st century?  Everything that could be (and has been) said about the first five volumes holds true here, from the goofy comedy and likeable characters to the video game references and fun action.  There's a nice conclusion to the love story that works as a shutting of the door on this portion of Scott and Ramona's relationship as they embark on the grand adventure of their future together, a nicely hopeful and romantic send-off that should warm the heart of anybody who has ever been in a long-term relationship.  Scott makes the rounds of his ex-girlfriends as he gathers his energy for the final showdown with Gideon, he fights his a doppelganger that represents the mistakes that he wants to forget before realizing that it's part of him, and does more of the growing up that's been nice to see over the last few volumes.  It's good times all around.

So, since that's not much of a critical analysis, here are a few of the things present in this volume that I've really enjoyed about the series: 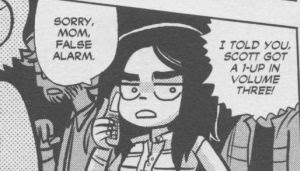 I love the way the characters just casually mention that they're characters, or remember stuff that happened in previous volumes.  It fits right in with the acceptance of video game tropes and wacky fantastical ideas as if there's nothing strange about them.  The world of the series is a heightened version of reality, where people have recognizable characteristics and personality traits, but exhibit outsized emotions, break out into fights or songs, and treat it all as perfectly normal.  That's awesome. 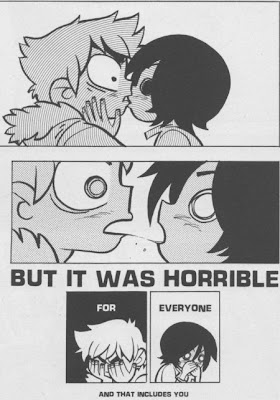 The fourth-wall-breaking even goes so far as to draw the reader into the story, as if we are affecting the plot and characters just by observing them.  It's a fascinating idea, a sort of communication directly between the author and the reader, and it's an element of that metafiction that isn't used all that often, entwining all involved with the comic, fictional and real, together.  It's a good example of the inclusiveness that makes the series so enjoyable, rather than a part of a hipster/gamer/comics/manga subculture.  Everyone can get something out of it! 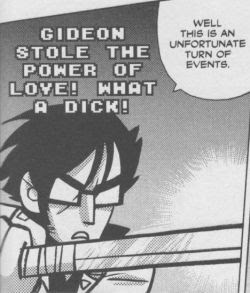 This is a subset of "metafiction", but I've always loved the goofy captions (if you can call them that; maybe "on-panel text" would work better, since they're often more like descriptive subtitles or non-onomatopoeic sound effects), which seem like part of the video game references but don't always fit into that idiom (unless they're meant to represent a narrator shouting out things like "Scott wins!").  They're another entertaining layer of communication between O'Malley and the reader, even in scene transitions like "Anyway" or "Soonish". 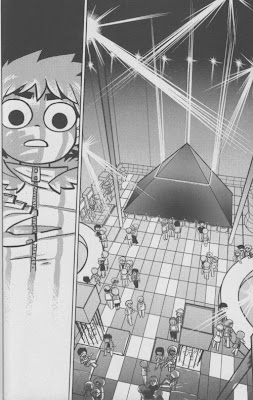 O'Malley's art is always described as "manga-influenced", but that's only part of it.  His characters do have big eyes, but they're different from most of those you see in manga, more round, with thicker outlines and smaller irises.  The face and body shapes are different too, with chins usually being round rather than pointed, and bodies more squat, with thicker feet.  The style is unique to O'Malley, and he draws from all sorts of influences.  That said, there's one moment in this volume reminiscent of fighting manga like Dragonball Z or Fist of the North Star that was pretty great.  The use of bursts of lines (sometimes for speed, but also for energy or emphasis) and lighting effects are really nice here too, as seen in the image above.  It should be fascinating to see what O'Malley will do next now that he's free from the chains of a long-running series and able to go in any direction he chooses.

So, is that it for this volume?  A few notices of neat stuff and a general good vibe?  I hope that's not all that comes across, since I really do love this series, and it's been one of the highlights of the 2000s so far in terms of comics.  As fun as all the fighting and video games and funny lines are, it's the grounding in character that has made it all work, the way the people populating this goofy world, their friendships and relationships with each other, seem real, giving readers an anchor to hold on to in the midst of all the craziness.  Seeing Scott holding down a job and being responsible, having a great time playing music with his band, spending quality time with his friends, and embarking into the unknown with a serious girlfriend is a great jumping off point in a wild journey that, for all its over-the-top fighting and silliness, is a recognizable symbol of the tumultuous years of our youth.  One can only hope that we can all look back so fondly on that time in our lives, remembering the highs and learning from the lows.  Whether we collect coins and extra lives or just hang out in bars and make jokes with our friends while trying to win over our dream girl, we're all human.
Posted by Unknown at 8:39 PM