I wasn't originally going to go to Wizard's Chicago show this year; the lineup of guests and such interested me very little.  But sometimes fate, or certain disreputable individuals, conspire to lure one in.  Apparently, when I described the show as "increasingly irrelevant" in my C2E2 roundup, that rankled the Wizard folks, so they invited me to come interview their CEO, Gareb Shamus.  I guess that's an opportunity I couldn't pass up, so I got to go listen to him give his spiel about how great the show was and ask him why the hell Rod Blagojevich was a special guest.  You can read the results over at IndiePulp, along with my thoughts on the convention proper, which can be summed up as "I don't think I ever need to go again."

As much as celebrity, pop culture, and other such nonsense dominated the con, I was determined to find some good comics, and while the artist alley section, which is usually my favorite place at these shows, was dominated by crappy pin-up artists (and zombies.  So many fucking zombies.  When will that fad ever end, goddammit?), I managed to find a few artists that I liked, or at least had an art style that caught my eye in the midst of the various Jim Lee and Mike Deodato wannabes.  Mike White has an appealingly cute style on his comic Amity Blamity (formerly Pigtails & Potbellies), which is coming out in print next year from SLG, but is being serialized online now.  The humor isn't anything to write home about, but that little girl and pig are pretty adorable.  Adam Fotos' Dragon and Goat seems kind of similar, with cute characters and nice coloring, but pretty rote, newspaper comic strip style humor.  Jason Week's Billy the Dunce, on the other hand, is quite nicely illustrated and fairly funny, from what I can tell.  The current storyline features a cool fight scene, so that's always nice.

Matt Chicorel was the only creator I actually bought anything from, that being the first two issues of his minicomic Buzzpop.  He has an appealing style full of characters with long, thin limbs, sort of like a less-cluttered Jim Mahfood, and he appears to be weaving together a sort of narrative about various slacker crime-fighter characters that mostly just hang around and talk.  It's enjoyable, and while much of the two issues were filled with concert posters and the like, the quality of the comics themselves showed a marked increase over the course of a few years of work.  I'm curious to see how he developed after that, but I can always read what he has posted online and try to acquire the next two issues.  The first issue was also shared with Travis T., whose Drop Dead Dumb isn't bad, but hopefully he is able to do something besides imitate Daniel Clowes.

But aside from the mainstream guys who usually make it to these shows (I always like to talk to Chris Burnham, and Geof Darrow is nice to see, although I don't think he's put out any comics in about five years.  Not much interest in the likes of Billy Tucci, J. Scott Campbell, Joe Maduriera, Greg Horn, and Arthur Suydam though), there just wasn't much to see. So, determined to come home with some sort of comics, I scoured the dealer stalls for deals, and came home with the following pile of stuff: 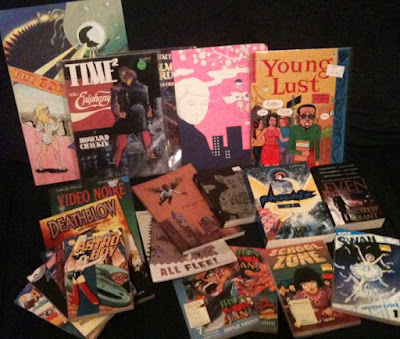 You can see Lauren Weinstein's The Goddess of War, both issues (or are there more?) of Howard Chaykin's Time^2, a book called Epoxeye by John Pham, Young Lust #8 (featuring a bitchin' Daniel Clowes cover), Video Noire by Eduardo Risso and Carlos Trillo, the collection of the Brian Azzarello-written Deathblow series, Farel Dalrymple's Pop Gun War, All Flee! by Gavin Burrows and Simon Gane, Mat Brinkman's Teratoid Heights (which was only two dollars!), volume 6 of Osamu Tezuka's Phoenix, four volumes of Astro Boy, two volumes of Iron Wok Jan!, and one volume each of School Zone and Swan (all the manga volumes were also two bucks.  Score!).  Oh, and a free crime novel by Andrew Grant called Even that came with the purchase of Deathblow from the Crimespree booth.  Not a bad haul.

So I didn't come away too unhappy, and those are some quality additions to the collection, if I ever get around to reading them along with everything else I have yet to get to.  So there you go: comics could actually be found at the Chicago Comic Con, if you knew where to look.  But next year, I'm not going to bother looking.
Posted by Unknown at 9:54 PM