A Bride’s Story: Thanks for the mammaries 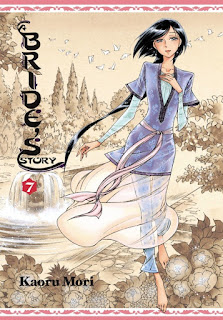 Wow, I never expected a female centered comic like this to contain so much nudity. Naked bodies have shown up in this series before, but never to this extent. I’m not sure exactly which genre this manga fits into in Japan (that is, whether it is published in a magazine aimed at men or women), but based on the subject matter, I’ve always considered it to be a josei (women’s) series. The emphasis on naked women here, and especially large, shapely breasts, has me wondering though.

The large increase in nudity in this volume comes from a plot centering around women’s bathhouses. Since portions of the series follow the English journalist Mr. Smith as he travels back home, Kaoru Mori uses this conceit to have him meet various women along the way and explore their stories, making for a rich look at the various cultures in Central Asia and the Middle East in the 19th century.
Actually, Mr. Smith never meets the main character of this volume, even though he spends a month staying in her house. The culture in this area (part of Turkey, I think) hides women away from public sight, with them wearing head-to-toe coverings in public and only removing them in the presence of their husband or other women. We meet Anis, who is married to a rich man and living what she supposes is a happy life, but she’s very lonely, with only her baby boy and his nursemaid to keep her company.

The plot kicks in when Anis learns of the concept of “avowed sisters”, women who pledge themselves to each other as best friends and confidants for life, taking vows that seem to be as serious as marriage. She resolves to go to the public baths to try to meet someone who could be her avowed sister, and that’s where we get lots and lots of nudity. These scenes have so much flesh on display, with such pointed emphasis on sexual characteristics, that there must be at least some intent to attract male readers. The combination of this copious nudity with a plot emphasizing mutual female yearning even lends a lesbian subtext to things, which can’t be accidental.

However, this is still very much a women-centered story, focusing on the characters’ feelings and desires, and it even takes a bit of a melodramatic turn when tragedy strikes almost immediately after Anis befriends a woman named Sherine and achieves her goal of finding a lifelong friend/partner. It’s a good combination of heartfelt yearning and drama, and while it doesn’t reach the satisfying heights of previous volumes in the series (possibly due to its complete lack of questioning the way women are treated in this society), it’s still quite good.

Much of that comes from Mori’s skill, both at weaving good drama and at creating a fully-realized environment for her characters to move through. Her attention to detail is incredible, whether she’s drawing an opulent mansion or a dirty hovel, and whether she’s filling pages with naked bodies of varied shapes and sizes or demonstrating emotions by cramming panels with flower petals or intricate designs. I especially like the little details of human or animal interaction she always includes, like the way Anis’ cat alternately craves and rebuffs affection: 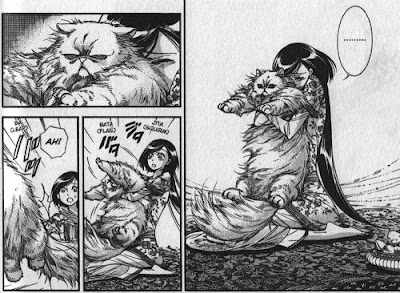 So, if you’re new to this series, I’d recommend reading the other volumes first (that’s the way numbers work), but if you like what you see there, you’ll be glad to know that the series continues to delight. I’m looking forward to the next volume, which promises to return focus to its original characters, and hopefully find a suitable match for young Pariya. If the seven extant volumes of the series have led me to expect anything, it’ll be full of good, moving drama, and hopefully an ending that will make me happy.
Posted by Unknown at 12:13 PM