Fragments of Horror: Junji Ito Is a Weirdo

Fragments of Horror
By Junji Ito
Published by Viz Media 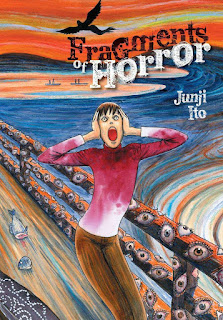 It's not exactly news that Japanese horror can get pretty weird, but if you're looking for another example to reinforce that stereotype, here's a new collection of short stories by Junji Ito, who has created lots of strange, creepy manga like Uzumaki and Gyo. These stories are a little bit mixed, ranging from kind of silly with occasional grotesque imagery, to pretty weird and disturbing, to stuff that probably makes more sense to a Japanese audience.

On the silly side, there's "Magami Nanakuse", about a girl who is a fan of a quirky author who gets a chance to meet her literary hero, only to discover that she is a cross-dressing creep (Ito doesn't seem to be making any sort of statement about transgender issues here; when the girl meets the author, her first thought is "She's a man...") who berates the girl and tries to get her to display "tics" that will inspire her to write her next book. It all leads up to a sort of jump scare that's really more funny than creepy.

"Blackbird" kind of fits into this category as well, following the story of a hiker who falls and breaks his legs in a remote location, being kept alive for a month by a strange, bird-like woman who feeds him raw meat and blood by chewing it up and spitting it into his mouth. The eventual reveal of where the meat is coming from doesn't really make much sense, but Ito's depiction of the woman is pretty creepy.

There's also "Dissection-chan", about a girl who is obsessed with dissecting animals, and even ends up wanting to be dissected herself, to the point that she tries to imitate a cadaver that medical students train on. It's goofy as hell, and it leads up to a crazy reveal that occurs when she finally dies and gets dissected for real.

On the WTF side of things, "Wooden Spirit" starts off interestingly, with a father and daughter who live in a historical house getting a visit from an architecture student who professes a love of the building and manages to worm her way into their lives. But once she starts humping the walls and the beams and floorboards all sprout eyes, it ends up just being strange, seemingly reflective of Japanese folklore. It's creepy, but I feel like it would be more so if I really understood how it fits into those sorts of legends.

The same goes for "Tomio - Red Turtleneck", which has a marvelously icky premise in which a boy falls in love with a fortune teller who tries to remove his head by wrapping one of her hairs around his neck, which ends up severing it, forcing him to hold his head in place to keep it from falling off. It's gross and strange and horrific, but the WTF part comes in when he and his girlfriend end up facing off against the fortune teller and killing her, after which her body turns into three childlike figures who call him "Daddy" and climb all over him, forcing his head to finally fall off. It's a real head-scratcher of a moment, and one that makes me feel like I'm missing something.

On the genuinely creepy end of the spectrum, I enjoyed the first story, "Futon", about a woman whose husband refuses to get out of bed because he sees monsters everywhere. She thinks he's crazy, but when she starts seeing them too, the reveal (and its eventual explanation) is pretty great: 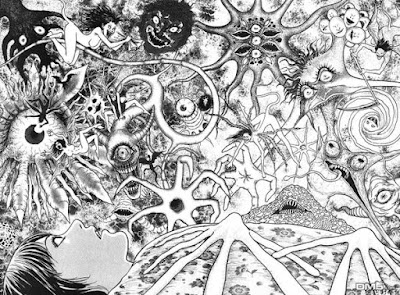 "Whispering Woman", the books' final story, is kind of creepy as well, although it ends with a twist that didn't really grab me. It's about a young woman who can't make any decisions for herself, so her father hires a caretaker who shadows her and gives her constant instructions. The creepy part comes from the way the caretaker slowly wastes away, putting so much energy into the girl in her charge that she becomes a husk of a person, simply following behind the girl and whispering instructions into her ear. That's a great image, but Ito had to try to bring in some other plot threads to give it a bit of a shocker of an ending, and I didn't find that to work all that well.

The one story that I thought did work pretty effectively is "Gentle Goodbye", which also happens to be the least creepy and grotesque one here. It's about a young woman who marries into a rich family and discovers that they have a tradition of creating "afterimages" of their dead family members, sort of ghosts that hang around for a couple decades until they fade away, allowing the family to come to terms with their deaths. As the story proceeds, various characters are revealed to be ghosts, and it's strange and sad and pretty effective. Probably my favorite story in the book, even though it's the least out-there.

Overall, this is a fun read, especially if you enjoy the craziness of Japanese horror and culture, or if you like seeing Junji Ito come up with bizarre, grotesque imagery. I can't say it's great (if I was recommending an Ito work to check out, I would probably suggest Uzumaki), but it has its moments. If weird Japanese horror is something you enjoy, you'll probably like it.
Posted by Unknown at 2:35 PM