The Divine: It's pretty wicked 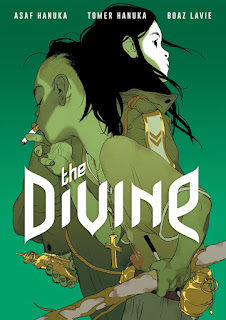 This is kind of an odd graphic novel, and not just because it's full of all sorts of weird shit. No, what's especially odd about it, and probably the biggest knock against it, is the pacing. The story involves an American getting in crazy adventures in a small island country in Southeast Asia, but it spends nearly a quarter of its page count getting there. Instead of grabbing the reader and jumping into the action, we are slowly introduced to the main character, an explosives technician named Mark who lives in Texas with a kid on the way, seeing him forced to listen as a colleague brags about the money he made working for the government on a job in some tiny country called Quanlom. We get to see Mark worry about getting promoted at his job, his relationship with his wife, some odd dreams that he has, and maybe a hint of ennui that leads him to accept his friend's offer at the spur of the moment. It's possible that all this material is supposed to give you an idea of Mark as a person before plunging him into unknown territory, but there's really not much there; he's only slightly less of a blank slate than if the book had simply elided this entire opening section.

Once we get to Quanlom, things still take a little while to get going, as Mark and his Ugly-American friend Jason go about setting an explosives charge in the local volcano, for not-very-well-explained purposes that I think have something to do with mining. They are supposed to wait a day or two, set off the bombs, and head home, but Mark notices a young boy who fell climbing the mountain, and over Jason's objections, he decides to help him, bringing him to get patched up by their medic and then escorting him back home to his family. And that's where things finally get interesting, as Mark ends up going alone with the kid on foot due to an uprooted tree blocking the road, at which point he is attacked by a group of kids wielding guns and machetes, tied up, tortured, and told he has the choice to either help them disable the explosives that he had just set or die. And finally, we're off on a crazy adventure! 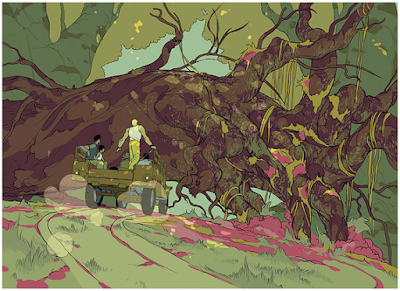 Things take a turn for the bizarre when we meet the leaders of the kid gang, a pair of brothers who claim to have magical powers that they got from a dragon that lives in the volcano. That seems pretty nuts, but when one of them starts to demonstrate telekinetic abilities, all bets are off. And sure enough, things get pretty wild when the kids end up facing off against the country's army (who Mark and Jason had been working with) in a battle that involves ancient giant magical soldiers and people getting their insides forcibly separated from their bodies. 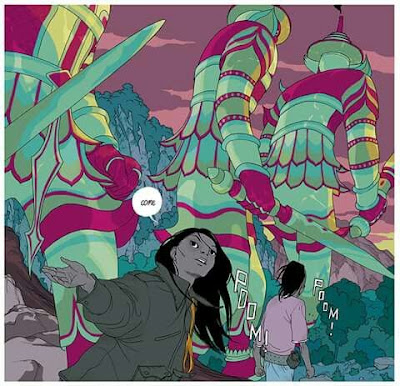 This section is where the book really shines, due to what one would expect to be incredible artwork by the Hanuka brothers. They fill scenes with awe-inspiring imagery that recalls Akira and European sci-fi comics alike, while still nailing the personal details, the facial expressions and body language that demonstrate awe, fear, hatred, or determination. The color scheme is especially well done, with the inclusion of pinks and reds among the greenery of the jungle to make things seem unsettling and wrong even before things go nuts.

So, I would say this does end up being pretty good overall, even though it takes too long to get going. The afterword, in which writer Boaz Lavie talks about how he was inspired by a photograph of two Taiwanese child soldiers, kind of gives the game away. The magical twin characters are the heart of this book, the only ones that really come to life as more than ciphers or stereotypes, and trying to build the narrative around people who are much less compelling doesn't really work. I wish the whole thing had focused on them, rather than spending so much space getting to the point where they can appear. But even with those faults, this is still worth checking out, if only just to see the eye-popping images that the Hanukas create. Once they get going, they can grab the attention like few others.
Posted by Unknown at 7:00 PM