Nijigahara Holograph: I don't think I'd want this comic to be three dimensional 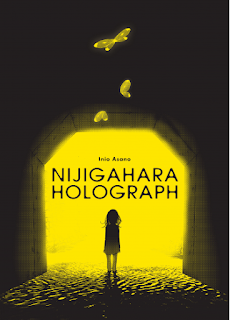 I've been a fan of Inio Asano ever since I read his excellent book Solanin, which was a lovely slice of life story with wonderfully realized characters and lots of well-earned emotion. His two-volume collection of short stories, What a Wonderful World!, was pretty good too, but around the time that I read those series, I'd heard rumors of an excellent earlier work focused more on horror than on young people trying to find purpose.

Now that I've finally read Nijigahara Holograph, I can see some of the seeds of Asano's later themes, but here they're mixed with some really disturbing psychological stuff, possibly stemming from a sort of cultural hopelessness, maybe the same sort of thing that Kazuo Umezu explores in Drifting Classroom. But this is pretty different, being the sort of elliptical, somewhat impenetrable style of Japanese horror, with only slight hints of the supernatural and a lot of difficulty figuring out just what the hell is going on.

So, what's it actually about? The story jumps back and forth in time, alternating between following a group of kids and teachers at an elementary school and then checking in with them eleven years later as they're still reckoning with the things that happened. A lot of the details get teased out over the course of the book, so it takes a while to figure out what exactly happened in the past and how it is still affecting everyone in the present.

Much of the oddness seems to surround a spooky series of tunnels that some of the kids pass when walking between home and school, and there are also a bunch of butterflies that may or may not be supernatural that regularly appear in huge swarms. It's only slightly creepy, and the build to some eventual reveals is slow, but we eventually see that several of these kids are rather troubled. There's a transfer student who doesn't seem to get along with anyone, to the point of angrily lashing out at anyone who tries to get close to him. There's another kid who is a bully, with some of his misanthropy stemming from the way all the other kids treated a girl who he liked. And there's also a teacher who was assaulted when trying to defend a student and is slowly losing confidence in herself and feeling like she has nothing to offer the children in her care.

In the present, we check in with everyone and see how the events of their past messed them up, and the book slowly builds to some reveals that eventually show how some original sins led to a great deal of suffering. It ends up being pretty effective, if not especially scary, although there is one very disturbing scene in which someone who seemed to be a kindly character turns out to be one of the main sources of the horror that has been affecting everyone.

In the end, I'm not completely sure what to make of this story. I think I can see what Asano is going for, examining the way past sins can affect the present and looking at how small decisions can spiral out to result in larger consequences. I think there might be a bit of social commentary going on, looking at how the failure to give children the love and support they need can result in pretty severe consequences later in life.

Whatever the case, the book ends up working fairly well, but I'm glad Asano went in a different direction in his later works, trying to focus on how people can struggle to live and thrive in a difficult world. There's a place for horror and nastiness, but I think Asano is better suited for positivity and hopefulness, as well as capturing the moments of beauty in life. He manages to do that here too, even amidst all the psychological anguish: 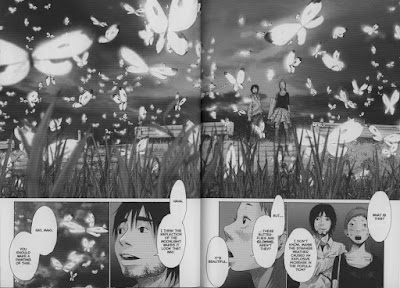 So, I'm glad I read this so I could see some of the evolution of a great cartoonist, and I'm excited to see what Asano does next. Whatever it is, I expect that it will surprise and delight me. Don't let me down, Asano-san!
Posted by Unknown at 12:45 PM