Jojo's Bizarre Adventure: Things get more bizarre, believe it or not 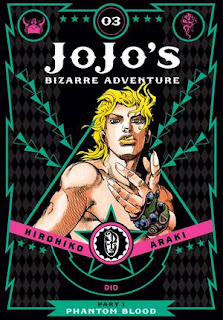 Man, oh man, the first two volumes of this series were crazy, and I kind of loved them, but if anything, things get even nuttier here in this final volume of the first part of the series. When we left off, Jonathan Joestar and his compatriots were in pursuit of the evil vampire Dio, but they had to stop to fight some medieval knights that Dio had resurrected as zombies. We get the rest of their fight here, and it's full of goofy moments, including a breathlessly narrated revelation of the knights' awesomeness: 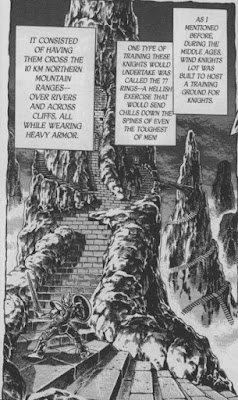 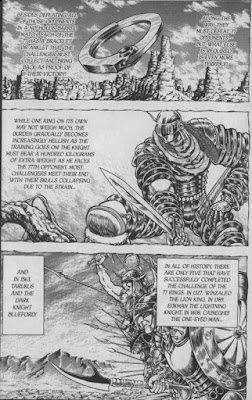 First, Jonathan battles Blueford, starting out by fighting him underwater (where he can't use his Hamon breathing powers) and then facing off against his crazy prehensile hair: 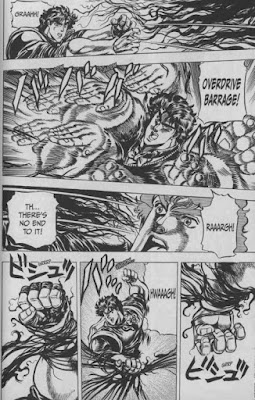 He ends up defeating him by punching him so hard that it destroys not only his body, but also the evil in his soul (or something like that): 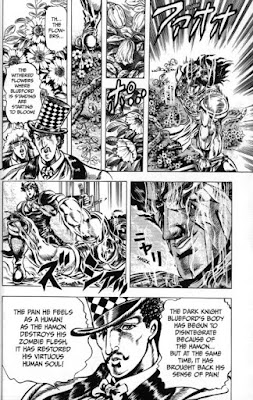 Then, it's time to fight Tarukus, who Araki draws as a massive giant towering twice as tall as the rest of the characters, with a chest that's as wide as a car and an armored breastplate that makes it look like his abs come in a 16-pack. He's nastier than his compatriot, which he demonstrates by picking up some random guys and squeezing them like fruit so he can drink their blood: 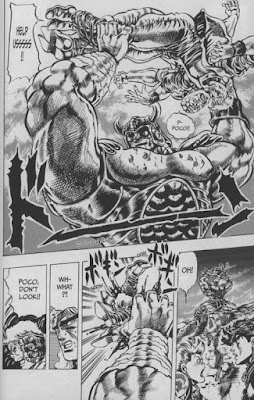 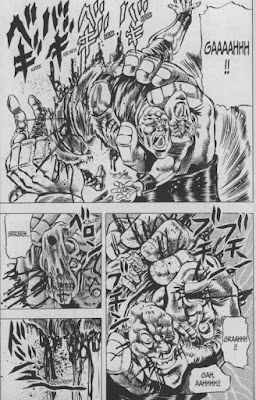 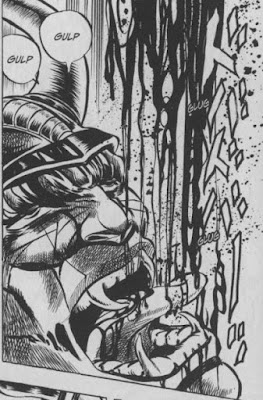 JoJo ends up fighting him in some sort of medieval contraption in which they both have unbreakable collars locked around their necks, which are then attached to a chain that connects them through holes in the ceiling. It's weird and complicated, and at one point JoJo gets his neck broken but still recovers enough to do this: 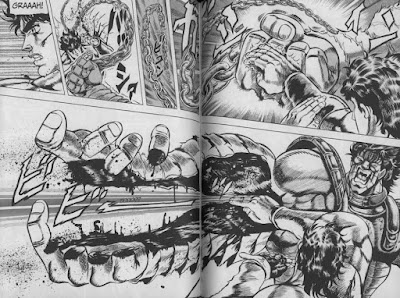 Did I mention the prevalent gore in this series? It's totally nasty/awesome, which is as good a descriptor of this manga as any. This gets demonstrated again in a scene in which Dio is turning some villagepeople into zombies, and a woman begs him to spare her baby, so he promises that neither he nor any of his followers will harm the baby. But! When he turns her into a zombie, this happens: 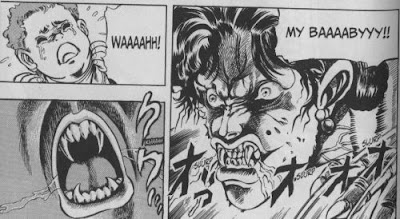 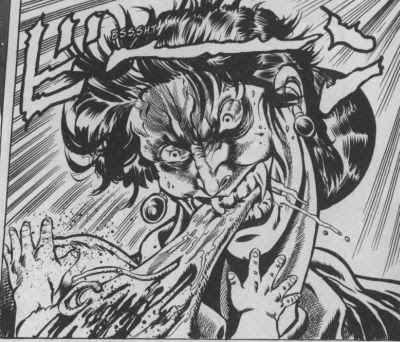 Yes, this manga has a scene in which somebody eats a baby. Holy crap!

So anyway, Jonathan and his pals (which include some more Hamon masters who showed up from Tibet) eventually confront Dio, and all sorts of wackiness happens during the fight. At one point, they get attacked by a guy who had a bunch of snakes coming out of his head, and this happens: 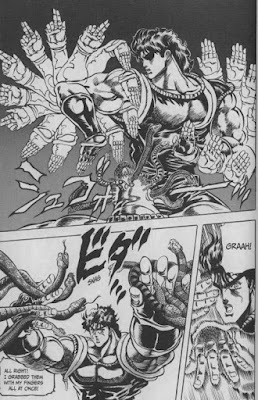 Dio is crazy powerful, so nothing seems to hurt him, This gets demonstrated when JoJo manages to mostly bisect him with a sword, and it barely seems to slow him down: 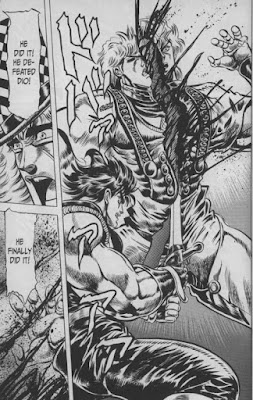 But the good guys win of course, both through overwhelming virtue and also the support of their allies (there are two separate moments in this volume in which one of Jonathan's pals gets dismembered but manages to provide one last bit of support before dying). However what appears to be Dio's final defeat occurs about 70 pages before the book actually finishes, so you know he's going to somehow survive for another battle. And sure enough, we learn that he managed to cut his own head off before JoJo's Hamon energy completely destroyed him, and one of his minions absconded with his remains so he could menace JoJo another day.

Thinking he's found a happy ending, Jonathan gets married and heads off to America on a honeymoon. But Dio has managed to sneak his head onto the ship, and he's decided to take over JoJo's body and spread his vampire evil in the New World! Oh no! But don't worry, the first part of the series is almost over, so Jonathan manages to sacrifice his life to stop Dio, leaving his pregnant wife as the only survivor. Which leads us to... 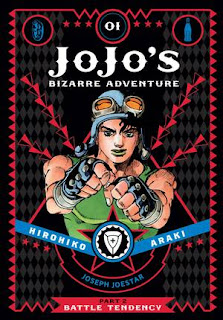 The second part of the series picks up 50 years later in 1938, with the hero this time around being Jonathan's grandson, Joseph Joestar. This JoJo is kind of different; he's more of a troublemaker, and he's got a temper and a snarky attitude, often getting in confrontations with people, making them angry, and then predicting what they'll say to him in response: 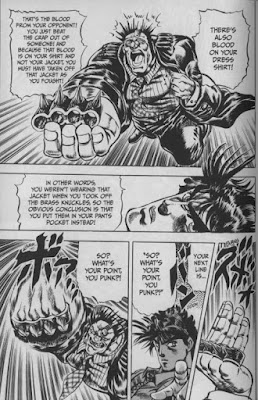 He was born with the ability to use Hamon powers, so he's already pretty awesome when the story starts, and he'll presumably learn even more amazing powers in his continuing adventures. These start happening when Speedwagon, who in the gap between part 1 and 2 has become a rich oil magnate, discovers a weird underground temple in Mexico that contains more of the stone masks that turned Dio evil, as well as a weird pillar in which a humanoid, possibly alien figure seems to be in stasis. Could this be the source of the evil masks? Is it an example of humanity's ultimate evolution? Probably!

Since this is 1938, Araki gets the chance to use Nazis as some secondary villains, with them capturing Speedwagon and transporting the pillar man to their base in Mexico (sure, Nazis hung out there sometimes, right?). But before Joseph gets a chance to confront them, he has to fight Straizo, one of Jonathan's allies from the end of part 1, who decided to use the power of the masks in the temple in Mexico to gain immortality and attack Joseph in New York. This leads to a pretty crazy fight, which begins with JoJo introducing Straizo to his little friend: 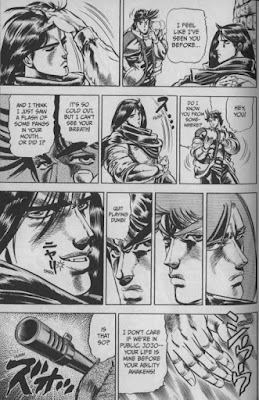 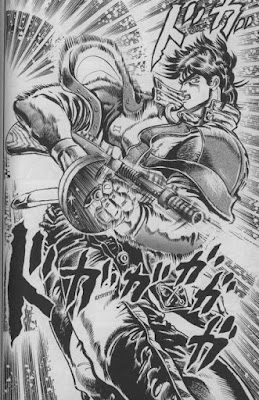 After JoJo wins, he heads down to Mexico on a motorcycle, giving Araki a chance to put him in cool-guy poses and show off his bizarre take on human anatomy: 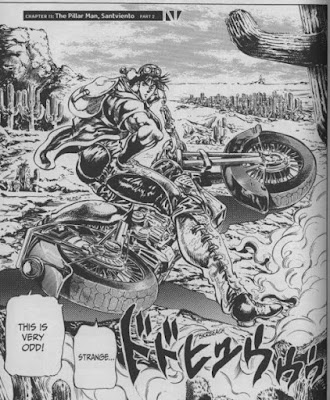 There's an amusing fight involving a Nazi assassin and a cactus, and Joseph tries to sneak into the Nazi compound by donning a rather unconvincing disguise: 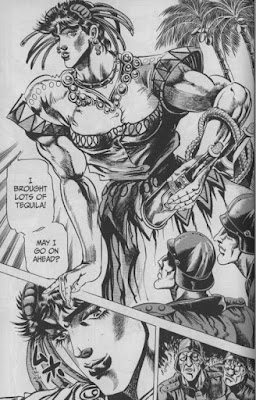 Amusingly, this doesn't work in the slightest, so we're spared any scenes of gay panic in which Nazis hit on him and get grossed out when they find out he's a man.

And then things get crazy again, when we learn that the pillar man, who the Nazi commander has decided to name Santviento, is a super-powerful vampire type who can quickly learn modern language, contort his body to fit through tiny vents or wear people's bodies like a skin, and somehow feed off people by consuming them with his entire body. This leads to all sorts of nastiness as he destroys pretty much everyone in the base, and plenty of crazy stuff when JoJo fights him: 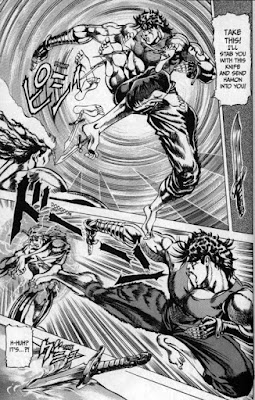 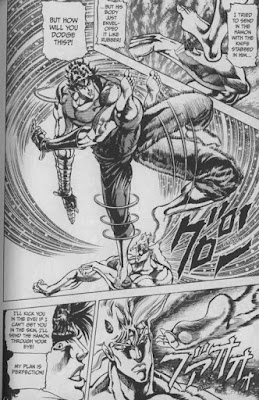 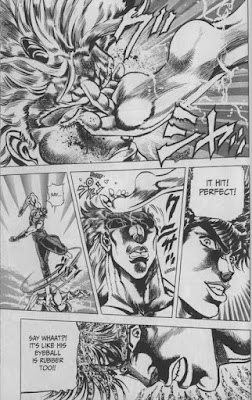 But since this is only the first volume in this part of the series, Santviento ends up being something of a minor, easily defeated threat. JoJo does manage to beat him in a pretty awesome fashion by using his weakness against sunlight, but then he learns that this pillar man is only one of several from around the world, and they'll be waking up and attacking humanity soon. Join us next time for more crazy nonsense!

So that's where we stand at this point of the series, which has since gone on for dozens of volumes that presumably get ever nuttier as they go on. I'm fascinated to read more, since there's no predicting what sort of nonsense Araki will come up with next. Some of what he does is par for the course for shonen manga, with characters coming up with new uses for their powers and shouting out the names of their attacks, but Araki seems particularly inspired, having JoJo do things like use Hamon to shatter his motorcycle goggles and send the shards of glass flying at bad guys, or having the evil Straizo decide the name for his eye-beam attack is "Space Ripper Stingy Eyes!" Combining this with his bizarre grasp of anatomy and fashion, Araki is sure to keep the craziness flowing, and I'm excited to see how he'll break my brain the next time. Bring it on, JoJo!
Posted by Unknown at 7:54 PM